As an ancient evil awakens from its slumber, the Kingdom of Piena looks to the Goddess of Fate to appoint six heroes who can counter the threat. Young Adlet Mayer, the self-proclaimed ‘strongest man in the world’ attempts to draw the goddess’ attention by crashing a sacred tournament and wiping out its contestants — something the royal family isn’t exactly happy about.

Aqua’s verdict: The Most Average Anime In The World

Remember that joke I made in the preview about ‘brave’ being a word people in the olden days used to refer to a stereotypical Native American warrior? Yeah, turns out Rokka – Braves of the Six Flowers actually does feature Native Americans, sort of. In a nice change of pace from the usual Northern-European or Japanese fantasy setting, Rokka takes place on a continent inspired by Aztec, Maya and Inca cultures. Brightly coloured step pyramids, ceremonial masks and alpacas roaming the streets create a wonderful atmosphere, which Rokka sadly doesn’t use to its advantage. Main characters Adlet and Princess Nashetania stick out like sore thumbs — especially the latter, who is dressed in an unfathomable bunny girl armour that covers all but her vital areas, and a lot of the worldbuilding is provided by the two casually going over legends and traditions they’re already supposed to be familiar with. Brief hints like a quick listing of the previous Six Braves would indicate that the source material delves into this backstory in a lot more detail, but if this bait-and-switch was all the anime could do to adapt this world-building, it might have been better to just leave it out altogether. As a result, Rokka feels like an interesting premise left in incompetent hands. The novel’s exposition has been rather poorly and charmlessly converted into television dialogue, and dull production values make the beautiful, intriguing Kingdom of Piena look like a drab, unexciting place. Inappropriate use of CGI rears its head from time to time and unimaginative directing often gives off a vibe decidedly less epic than the one a story such as this one should have. As a result, the potential Rokka displays in its exciting fight scenes and interesting setting is quickly lost in a maelstrom of mediocrity. Saki screenwriter Tatsuhiko Urahata picks seemingly all the wrong aspects of Rokka‘s storytelling to focus on — Adlet’s annoying habit of calling himself the ‘strongest man in the world’ every other line, the highly non-specific evil the heroes are fighting, Nashetania’s cleavage — and sadly ignores many an attractive draw. Rokka – Braves of the Six Flowers makes a middling first impression by appearing mashed together from several ideas that fail to gel into a convincing whole. Fans craving for an enjoyable fantasy adventure may not be disappointed, but there are far better realized alternatives out there. 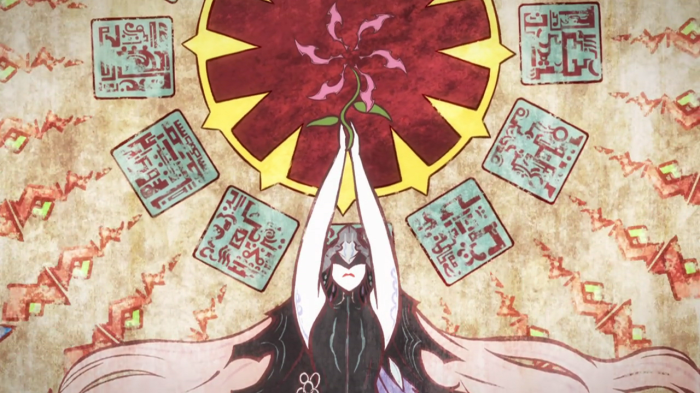 There was a lot to like about this first episode. I’m a big fan of the city’s pseudo-Aztec aesthetic, and the idea of a party of the world’s finest assembling every few hundred years to slap down the resident ancient evil definitely has potential for a fun adventure story. On the other hand, it could just as easily collapse in on itself: Adlet’s insistence of his own greatness is super grating, some of the other character designs are plain unpleasant, and the seeming over-reliance on exposition dumps means things tend to get dull. The progression of the plot and characters are going to make or break this show, so it’s earned another few episodes from me if only to see if it sinks or swims.

I’m not quite as down on this as some of my compatriots. While it isn’t perfect, its mash of native cultures is a refreshing take in light of Europe’s iron grip on the fantasy scene. I loved the inclusion of darts and macuahuitl (albeit sans the appropriate obsidian) as it gives it that extra touch of authenticity, like someone did more research than just googling “Aztecs and Incans”. In most cases, having the main character be such a smug bastard can be infuriating, but like Favaro before him we see a smartass with some skills to back up his mouth. That was certainly the best choreographed fight of the season so far, so if they’re able to save up their budget enough to bring that kind of action every episode I’d watch it for that alone. Even if the main characters conform more to a generalized, more consumer friendly vision of fantasy design, the setting still remains incredibly engaging, and I can’t wait until they get this show on the road.

This probably isn’t going to be one of the very worst anime of the new season, but it was definitely a terrible opening episode. About half of it was spent in ultra-bland and poorly-implemented exposition, and the other half seemed mostly to be outfit-porn, complete with several really obvious and completely unnecessary cleavage shots. It’s too bad, because I thought the first scene was actually decent enough – a good action sequence that served to introduce our main character quite well – but it all went downhill pretty quickly from there. I wasn’t aware that Rokka was based on a male-targeted light novel series until I looked it up afterwards, but somehow that knowledge didn’t come as a surprise.