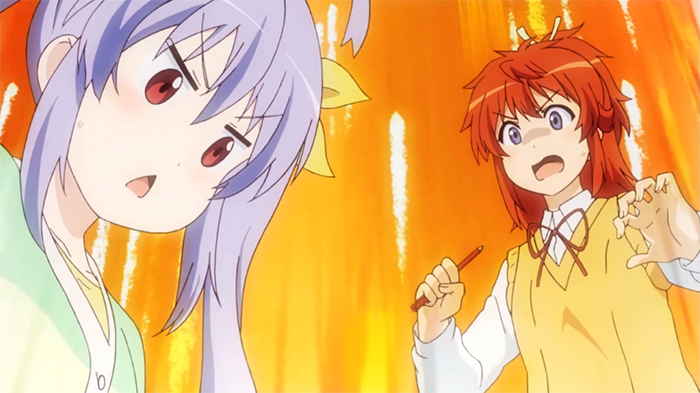 We launch the Late Edition of the Roundup with Working!!!, Gatchaman Crowds: Insight, Gangsta, Snow White with the Red Hair, Non Non Biyori Repeat, and the return of Durarara!! X2 and My Love Story.

Miss the Early Edition of the Roundup? Check it out here for our coverage of:
Chaos Dragon, Ushio and Tora, Miss Monochrome: The Animation 2, Classroom Crisis, School Live!, Prison School

Artemis: Although this episode’s story didn’t predominantly feature any of my favourite characters, I didn’t mind checking in with Seiji and Mika – it’s been a while since we’ve seen anything much of those two, and weirdly enough, they probably now have one of the most emotionally functional relationships of the entire series… though of course, with someone like Namie for a sister, there are bound to be a few road bumps along the way. Perhaps unexpectedly, Mika actually turned out to be a decent match for Namie – I hadn’t realized she was quite so crafty or level-headed in a crisis. A good thing that Seiji is so even-tempered too; I’m not sure I would have stopped at gently scolding someone for “going too far” if they tried to pour acid on my significant other’s face. That said, judging by Seiji’s reaction (or lack thereof) to Mika’s comment that she would literally eat Celty’s head if it kept Seiji by her side, maybe he’s less even-tempered and more psychotically indifferent.

Jel: I am boycotting this show until BRADIO gets to do the OP. Tell me that wouldn’t work!

Euri: Granted it’s been a long time since the previous two seasons aired, but have we ever had an episode that focused this much on the Takanashi family, outside of the initial reveal of all the sisters? I mean, we learn not only that they’re all petrified of their own mother, but that she is important enough to send a representative to check in with her family on her behalf. Working certainly hasn’t shied away from introducing new characters, but given Souta is meant to be the main character, it seems a little odd that we’re only just learning more about his family situation. But whatever, in the meantime we have a masochistic ex-husband to one of Souta’s sisters show up and demand to be hit. The episode was pretty so-so, but I can’t understand how the youngest sister in the Takanashi family had never heard of Minegishi. Like, shouldn’t you know that your sister used to be married? Even if she was too young at the time (it’s super hard to gauge the ages of all these characters) this sounds like something that would have been mentioned before.

Artemis: This was an interesting episode of Working in that it actually struck a relatively serious tone, at least in comparison to what we usually get from the show. Personally, I found it a much more interesting watch than this season’s premiere episode – not because I’m opposed to the normally farcically comedic atmosphere, but because I’ve always found Souta’s family a better focus point than many of Working’s main characters, i.e. Inami and Yamada. I could live with less of Kozue, mostly because I just don’t find alcoholism particularly funny, but Souta’s three other sisters are entertaining enough, and the whole situation with their mother and with Kazue’s divorced husband was actually pretty intriguing. I’m hoping we get a little more insight into these relationships further on down the line. 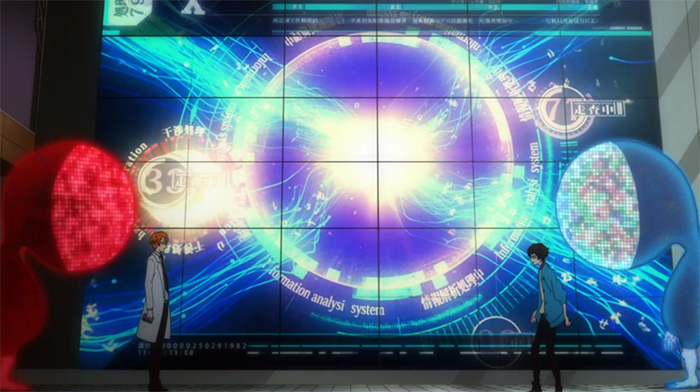 Jel: There is a lot going on in this show and this episode did a great job keeping it balanced. I loved that the leader of VAPE just warped right to Rui and got straight to the point. His logic in creating a problem to prove there’s a problem is infuriating, but just true enough that it’s hard to dismiss. If it wasn’t him, what’s to say it wouldn’t be someone else? I’ll be interested to see how that question is answered. Meanwhile, I’m loving Hajime’s new role as Tsubasa’s confident senpai and Tsubasa’s story went in a better direction than I expected. I thought she would be resistant to joining the G-team but it’s more interesting to see how quickly it overshadowed her dream. On a final note, I’m still thinking that voting for mayor over an app is a really bad idea, but I appreciated they took the time to address some of the logistics of it. I’m sure voting turn out would be much better if there were free iPads involved. So yes, plenty of things going on with Insight and I love it, give me more!

Gee: No lie, I was kinda disappointed when they revealed that there are superpowered genetically-enhanced (or straight up supernatural?) mercenaries with literal power levels indicated by the rank of their dogtags. Considering Nicolas’s feats in the first episode, I can’t say I was too surprised, but Black Lagoon managed to showcase even crazier displays of human fighting ability while justifying it with its 80s action thriller veneer. Relying on a quantitative ranking system just ends up being much lazier. As a result, the third episode ends up being much better, instead focusing on the daily life of bloodthirsty criminals. Gangsta simply doesn’t have the budget or staff to pull off action set pieces, so barring the hilariously lazy exposition, the more grounded moments shine the most. Gangsta is still one of my season’s highlights, but it’s going to need to work harder to really win me over.

Artemis: Still my favourite title of the season, Gangsta really seems to know how to get the best out of its setting. The whole seedy mobster thing has been done before, but where Gangsta differs is that it’s actually a good deal more understated than it looks like it’d be on the surface. With a complete lack of exposition, it’s really left up to the viewer to work out how our main characters feel in relation to each other, and how their pasts affect their current outlooks. The mood is left to speak for itself, and it certainly does this with aplomb – Gangsta might not be the most visually outstanding anime of the summer, but then, it doesn’t need to be in order to stand out, because the atmosphere is just that good a match for the show. These quieter, more reflective vignettes such as what we got in episode 3 are really working for me, and I prefer them over the more action-orientated scenes. As a result, I think this most recent episode is easily the strongest of the show so far.

Artemis: I think what I’m enjoying the most about Snow White so far is that Shirayuki comes into the story as an already very competent and cheerfully independent young woman, rather than one who starts off as weak or childish and must work her way up. There’s nothing wrong with the latter – it’s always nice to see satisfying character growth, and I’m sure Shirayuki has plenty left to learn regardless – but it does make for a refreshing change from a shoujo title such as this one. Sure, it’s a fairly classic drama/romance in some respects, so I expect the dashing prince to rescue Shirayuki just in the nick of time, as I assume does pretty much every other viewer. However, this strikes me as primarily a matter of demographic convenience; in terms of actual story, Shirayuki seems more than smart and strong-willed enough to do her own rescuing, which I think this episode demonstrated really well despite the stereotypical saving of the damsel in distress at its conclusion. 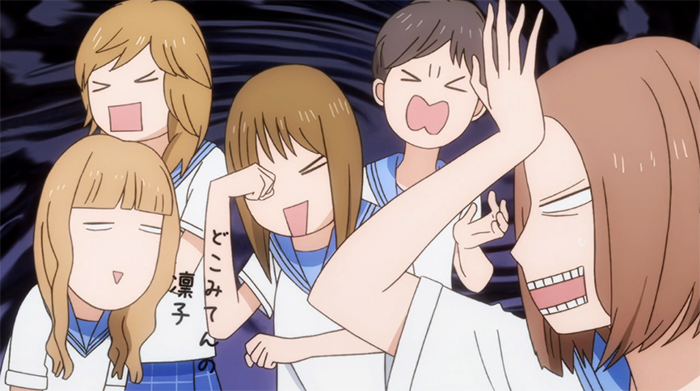 My Love Story – How I felt about the last two episodes

Artemis: I enjoyed the first half of this episode far better than the second half, but that’s purely because I don’t much care for either Komari or Hotaru, and am more charmed by the larger group dynamics and sometimes ridiculous antics. I find myself especially entertained whenever Suguru gets involved, because for someone who doesn’t have a single line, that guy has a pretty amazing presence, not to mention a rather… shall we say varied skill-set. If nothing else, it’s cool that a third-year junior high school boy doesn’t take himself too seriously and has absolutely no problem getting involved in a hilariously intense game of knock-down-the-ruler with his two younger sisters, the new transfer student, and a first-year elementary school kid. I can respect that.

Jel: I actually enjoyed the slower pace of the second half as that tends to be one of Non Non Biyori’s more unique qualities. It was a good example of the show taking advantage of its beautiful setting. There was something incredibly comforting about that glowing vending machine in the middle of the night, you could almost feel yourself standing there. That said I agree Komari and Hotaru are weaker links in the cast and I would probably rather be playing that sweet ruler game.

Jel: This thing where girls fall in love with Takeo and he’s too dumb to notice is not a good look for this show. It’s one things to tap into it for the creepy thing with Suna’s sister, but to do two stories about it back to back just made me angry. Yes, we get it, Takeo is actually a pretty cool dude and there’s plenty to like about him despite his appearance. And yes, we know he loves Yamato too much to ever stray from her. That’s the kind of material I’d expect from lesser romance shows since misunderstandings are cheap and easy drama. My Love Story was never about that and it’s at its worst when it is. Can we please just back to everyone being nice to each other again?