Don’t believe Takeo’s shirt: My Love Story!! did not do a good job this week, nor did Working!!! which barely redeems itself in its last few minutes, or Durarara!! which didn’t even bother airing an episode. Fortunately Gatchaman Crowds Insight ups the intensity and Snow White finally makes a move.

Miss the Early Edition of the Roundup? Check it out here for our coverage of:
Ushio and Tora, Miss Monochrome: The Animation 2, Classroom Crisis, School Live!, Prison School

No new episode this week, so Iro gets a break from Izaya until next time.

Working!!! – My face in the final few minutes of the episode

Jel: You know the episode has gone wrong when I was actually relieved to see Yamada appear around the midpoint. Takanashi’s family has always been terrible and his mother is apparently the worst of the all of them… well, the sound of Kozue’s voice might still be the worst of it all specifically, but mom is pretty bad. I was ready to go in hard and tear this episode to shreds but the final few minutes with Takanashi and Inami totally made me forget all of that. Their peculiar way of holding hands was the most adorable thing I’ve seen this side of My Love Story! (which legit bombed this week all the way through) and has set my hopes really high for the fast approaching conclusion.

Jel: It’s been a long time since we’ve had a legit fight scene so it was cool to finally see all the tension bubble out into physical form. Insight has so much food for thought that I think that aspect of it gets kind of underrated. It was also a fitting way for Joe to say he’s sorry, an interesting parallel to Tsubasa’s apology whom he compared himself to early on. I was kind of disappointed that Katze’s riddle had such a general answer, not to mention it still didn’t really make sense. I have a feeling something got lost in translation there. Either way, they’re doing a great job of making the Kuu’s more terrifying every week and with Rizumu ready to rejoin the action and Hajime dashing off to protect Gel for some unknown reason, are we possibly reversing villains AGAIN? Only this show would try and pull something like that off. 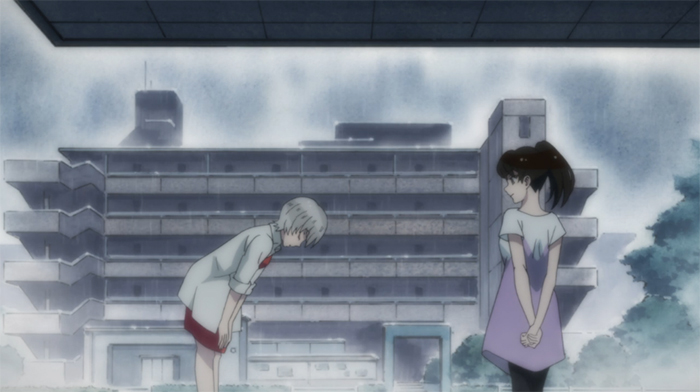 Gatchaman Crowds Insight – “Sorry I gave up my super powers and enabled the rise of Alien Hitler, we cool now?”

Artemis: I liked this episode well enough – it wasn’t a huge standout for me for the most part, but it was much better than last week’s and actually felt like it had a point, as opposed to simply retreading old ground. Obviously I’m happy that one of our main characters finally decided to actually do something about all that romantic tension, but mostly I’m just relieved that Kihal didn’t turn out to be Cliché Love Interest number #314. Anime seems to love trotting out jealous ex-girlfriends and arranged marriage candidates in order to up the ante on the romance front, and after last week’s episode preview I was worried from that this might be the case here. Fortunately, Snow White is too good for that kind of hackneyed storytelling, and it ended up being a perfectly pleasant, if largely predictable episode.

Artemis: I wish I still cared about this show as much as I did during its first half. Don’t get me wrong, there are still plenty of things about it that I like, but I just can’t summon up the same amount of enthusiasm anymore. I was badly hoping to get some more Suna screentime, whether or not that also happened to include Saijo, but this was the second-to-last episode and it felt more or less wasted on pointless drama – particularly that final scene in which Takeo spots Yamato in Ichinose’s car. The ‘cliffhanger’ ending means that the final episode will likely also be filled with uninspired drama and internal angsting on Takeo’s part rather than on something a bit more meaningful, or at the very least more fun to watch. We should be way past this kind of pedestrian storytelling by now, but it’s exactly because I know this series is capable of more that I’m so disappointed to see it finishing up like this.

Jel: The only good thing about this episode was the return of Takeo’s revolving message T-shirt and Suna’s uncanny ability to read the room. The rest totally killed any excitement I had for the finale (which as a heads up, will be delayed a week) for all the reasons Artemis just mentioned.