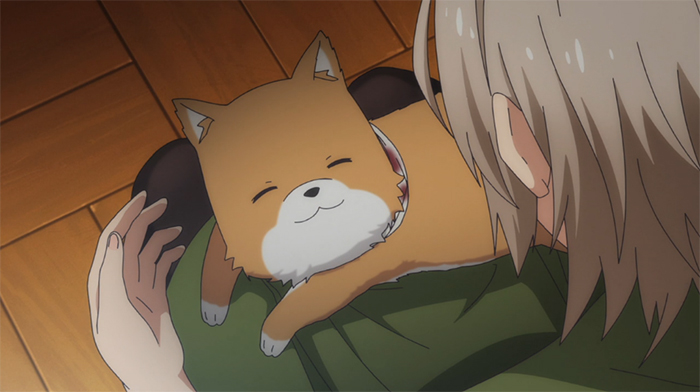 Say goodbye to all the high school related titles as School Live, Prison School, and Classroom Crisis come to a conclusion, as well as a “see you later” to Miss Monochrome as we’ll see her next season.

Jel: First things first: Taroumaru’s passing was possibly the saddest anime death of all time. Eat your heart out Jun Maeda. I was totally set to have him defy the odds and come back to full strength but then to see him go so quietly and peacefully… OK I know it really happens to illustrate that even with the cure they are not able to save the masses but still, what a gut punch. As for the rest of the episode, it was a pretty fitting conclusion to the girls’ time in the school. Yuki’s speech was sweet but perhaps a little too long, other than that framing their need to move on as a graduation ceremony was rather satisfying. Most surprising is the prospect for more adventures with the girls as they search for other survivors, which are briefly confirmed to exist. Do I even want more School Live at this point though? Maybe, but either way I’m glad I stuck with it to the end.

Marlin: First off, in a completely realistic context I thought it was pretty dumb that Taroumaru got a shot of the vaccine in the first place. He is a dog. This vaccine was not made for dogs. It shouldn’t work on dogs. I know this show eschews some realism but its resource management side has been pretty solid, so to see them use something so valuable on a dog just seems in poor taste. Granted, I will admit it got to me, even if it’s probably because it had to remind me of the passing of my own dog. I like that the girls were able to face the fact that they needed to finally leave their shelter, but the whole graduation and “Do we go to the work force or college?” thing was just waaaaaay too on the nose. There’s something to be said for subtlety, School Live, I thought we had an understanding after episode one’s masterful display. I get that graduation is the best framing device for showing them moving on, but Angel Beats! did that in such a beautiful way that I don’t think any other show could ever possibly try to top it. What we are left with is still a pretty satisfying show. Probably will not be my #1 favorite, but its intelligence and heart well overcomes its swimsuit episodes and kinda janky art direction.

Jel: This arc somehow manages to be exciting while very little is actually happening. I guess it’s calling back all the characters to help for the concert? They did a good job getting Mana to help without changing her cut throat personality, which was about the only concern I had with the latest developments. I wish we could have spent more time with the aliens and the sumo guy, but on the other hand it was kind of funnier to have them thrown in there with no further comment. On a final note I was kind of freaked out that Ru-chan can talk, I completely forgot they established that in the first episode. Now all that’s left is the concert, which we will pick up when The Roundup returns for the Fall season.

Marlin: I absolutely loved this finale. It’s always a mark of a good caper if they’re able to pull out a trick that even you didn’t see coming. That plus the culmination of the Kiyoshi/Hana sexuality duel really encapsulate all the good and bad of this show in one sitting. I still find it hilarious how Kiyoshi manages to turn the tables, but man was that awkward to watch. One thing I’ve come to realize from this finale is that Prison School is great at planning ahead. Most ongoing series struggle to find that perfect place to give a satisfying ending while still clearly showing there’s more to the story. With the boy’s hard-fought victory, I was wondering how the show would continue with its ridiculous plot. Having the revelation of DTO’s plot turn the tables on who is jailed is just the kind of spicing up that I think would draw. I’m not sure if I’m sold on the new bitchy characters, presumably the real Student Council opposite their Underground one, but if they can be sold as convincing new antagonists I would love to see Prison School continue on from the girl’s point of view. 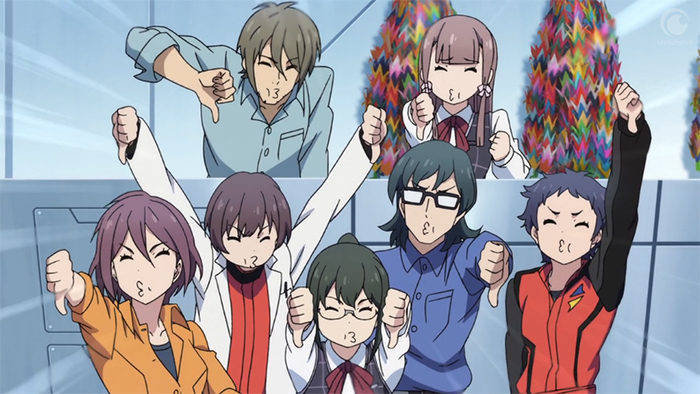 Classroom Crisis – In lieu of a “Final Thoughts” post

Jel: The title of the episode makes an outrageous claim that obviously this show cannot live up to, but that said this actual episode was OK. I have to admit it felt pretty good to see Kaito hand in the resignation papers and flip the script on the CEO and rocket chases through space are always a good thing. I was mostly sad though as it was another glimpse into this shows tremendous potential, which it found new ways to squander every week. It could never really find its footing, either bogging itself down in boring politics and labor union talks or hamming it up with over the top acting and soap opera-esque developments – and I don’t mean that in a good way. It’s sad that when I describe Classroom Crisis to the rest of the Glorio Crew the usual response is “that sounds awesome” but it was not, in fact, awesome. It’s just another average show that I will quickly forget as the new season rolls in.