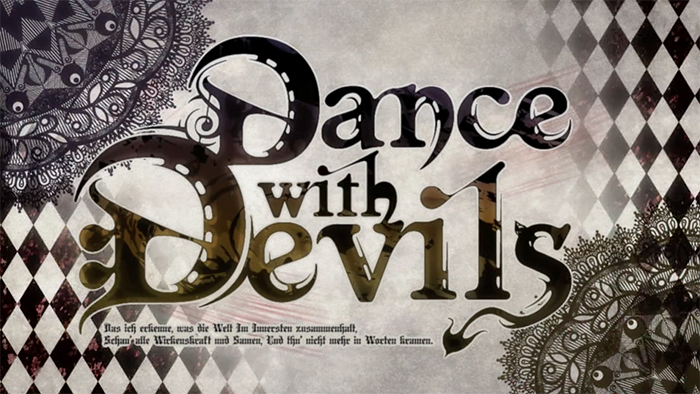 Ritsuka Tachibana is a seemingly normal high school student whose family has a history studying folklore and magic. After a strange encounter with the student council, her home is attacked by devil worshipping ninja vampires. Did I mention it’s also a musical? How is this not anime of the year?

Jel’s verdict: See You In Hell

The very first scene of Dance with Devils involves the heroine offering herself in a blue wedding dress and black veil to a man who is probably the The Devil while the cast spurs her on with whispered chants. Later, the student council breaks out into song in an introduction so dramatic that it ends with our main anti-hero biting a cracked glass apple. And as mentioned, our heroine’s home is eventually ransacked by devil worshipping ninja vampires before they are vaporized to dust, again by our main anti-hero. Yes, Dance with Devils is every bit the ridiculous, over the top madness I asked for in our StarMu write up. Deep down I know the writing is terrible, the music sucks, and the amusement I’m getting from the show taking itself 110% seriously is entirely unintentional, but I cannot deny I was entertained.

I also can’t deny I may be giving Dancing with Devils a bit of a pass since it’s an original series by Brains Base, who have mastered the art of turning hot garbage into a few of my cult favorites like Sengoku Collection and Ixion Saga DT. I might even be willing to give it another episode, although there are two things that I see going wrong fast: the quick and easy one is the fact there might not be enough songs to call this a musical. I felt like we were about one song too short in this first episode as the second half was entirely straightforward action and plot. More importantly though, I’m worried this will go the Diabolik Lovers route and the male cast will end up being incredibly abusive toward the heroine. It’s encouraging that she seems to have a solid head on her shoulders and doesn’t seem to have a problem standing up for herself, but the scene where she spaces out when she’s first introduced to the council started to feel a bit uncomfortable. But hey, if this show can keep a higher ratio of dumb songs per episode and manage to avoid any rape attempts I think it could be an entertaining ride. 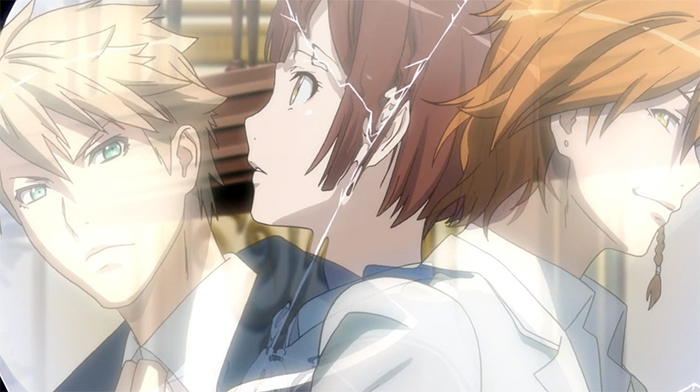 I didn’t hate this show. I repeat – I did not hate this show. Believe me, I’m as shocked as you are. Don’t get me wrong, I’m not saying Dance with Devils is by any means good. Production-wise, it’s about as terrible as Star-Mu, which I bring up as a comparison point not just because of the bishounen-heavy cast, but also because the staff clearly felt like treating the opening episode as a honest-to-god musical. The music itself is predictably awful, of course, but Dance with Devils still managed to surprise me in that it was nowhere near as terrible as I thought it would be – given the synopsis, I was imagining something much closer in style to the likes of Diabolik Lovers. Imagine my disbelief when the main character is proven to possess not only some common sense but also a backbone, and that there might even be some kind of actual plot afoot! Not much is known about the oh-so-mysterious student council yet, but so long as nobody refers to Ritsuka as ‘Bitch-chan’ then I feel like I’ve somehow come out on top with this one. (I’m still not watching a second episode though.)