Sundays at 10:00 am EST on Crunchyroll

Do Mon catches up to Sogo and the gang, while Moura reveals the truth about Felia’s origin.

This episode is interesting because there’s a lot of actual plot substance revealed throughout the numerous flashbacks, but it’s frustrating at the same time because of the very clumsy and predictable nature of those flashbacks. We’ve joked for a while about how cookie-cutter Comet Lucifer is, but that’s largely been hidden by the fact that it’s elected to do a lot of character based drama up to this point. Now we’re moving into the meat of the plot though and the cracks are beginning to show. For all the credit we’ve given 8-Bit for their work so far they’ve clearly still got a way to go in plot construction.

We do at least learn some important things about Sogo and Do Mon’s shared past together. The revelation that Sogo’s mother was a scientist who was dabbling in alternative energy sources isn’t too much of a surprise because that’s how these things always start, though I will give the studio credit for making its pioneering scientist a single mother, which is a nice touch. There’s potentially a lot of intrigue to be found in the political assassination angle too, but it’s so hastily sketched out here I’m not very confident that we’ll get more of it. Part of the problem throughout the series is that we haven’t always been clear on the motives of the bad guys, so it’s hard to really hate them or find them particularly villainous. I guess perhaps the intent is to preserve the mystery, but they haven’t given us enough nearly tidbits to follow to make the secret compelling.

Another part of the issue is the clumsiness of the dialogue. Up until now the fairly blunt emotional nature of the characters has been pretty forgivable because we’ve mostly been dealing with humorous anger or puppy love, emotions which lend themselves well to big melodrama. But the roughness of the writing comes through in the moments in this episode which are meant to be genuinely dramatic. Do Mon’s conversation (and subsequent cheap shotting of) Sogo is one of the lesser offenders because it’s a scene which works on the well-established relationship between the two and harks back to a very basic emotion that we all recognise. But the scene where Do Mon confronts Gus is much more over the top and subsequently practically laughable, particularly with the large amount of…

Ultimately I think the success or failure of this episode will be determined by how much if affects the overall plot. If Sogo and Felia really do strike out on their own for the rest of the show, I’ll be disappointed with the others being relegated to a B-plot, but it may well be the best thing for the continuing story. On the other hand if things just reset to the status quo it’ll be difficult to feel that a lot of the drama in this episode was for naught. Comet Lucifer is stumbling a little for sure, but at least it remains interesting while it stumbles. 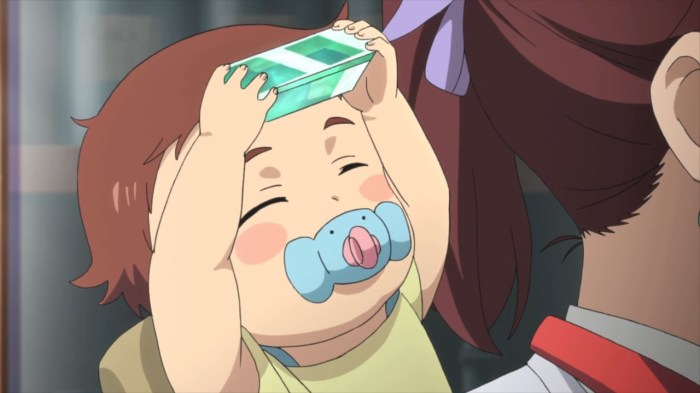