Hello, and welcome to All Your Monies, where The Glorio Blog’s resident toy and figure collecting crew (and Aqua) will run down the last week’s new pre-orders, turning a loving or scathing eye over what’s been put out for you to spend your hard earned cash on. This time, perhaps for the first time in AYM history (except that time it was All Your Honies), the boys handily outnumber the girls!

Zigg: The days of Nanoha dominating this feature are long past, but the franchise still knows how to turn out a spectacular figure now and then. I’m particularly taken with Fate’s gigantic trenchcoat here, which nicely calls back to her younger caped look while also giving an overall impression of a more mature character. Giant weapons are also obligatory and very welcome for figures from the franchise, and it’s a surprisingly cute face considering FREEing occasionally misstep on that front. The giant pricetag is a (not unexpected) barrier but overall this one’s a winner.

Jel: Ah, remember the good ol’ days of AYM when we had at least one Nanoha figure every week? This new Fate brings back memories, but it’s also an awesome figure. Giant, impractical weapons are a given so no bonus points for that, what I really love is her outfit. That blue coat looks really cool and those shiny armored boots are great. Add in the great action pose and this one’s a winner.

Iro: This is actually pretty cool. I like the blue coat a lot – barring impossible anime body-hugging-ness – and it’s a good, dynamic pose. Plus, it’s of an adult woman instead of a prepubescent girl, which sadly seems notable enough to comment on.

Zigg: While I fear Touken Ranbu will eventually overrun this feature in the way Kantai Collection attempted to do in the past, for now seeing more male figures is a pleasant novelty, and though Hotarumaru here may be a little on the younger side, at least he’s decent. I love the surprised, precocious expression, fomr the surprised face to the outflung arm, and the overall impression of cuteness really helps the figure. There’s marvelous detail too, like the inside of the cape or the shoulder guard, and overall it’s another fine figure from Koto.

Jel: I guess the inevitable progression from getting all these hot guy figures is moving on to little boys? This isn’t as creepy as past female counterparts considering he has clothes on, but I have to wonder if that’s where we’re headed eventually. Big picture aside this is a nice figure, featuring all the impressive detail work you’d expect from Touken Ranbou. The precocious pose is cute although I’m pretty sure he’s going to hurt someone with that sword, assuming that’s possible since he is the sword, maybe? I don’t understand Touken Ranbou.

Iro: This reminds me of a story my dad used to tell me: he was born in Singapore, and had some early memories of the Japanese occupation during World War II. One of the Japanese soldiers was trying to court his older sister (that is, my aunt), and on one visit let my dad mess around with his sword. This, naturally, led to said soldier getting his hand cut open by a small child.

Zigg: Shizuo seems a little on the noodle-people side here (© CLAMP) but you can’t knock the arrogant sneer on the face, or the inclusion of the trademark bent traffic sign. Perhaps one of the slightly plainer figmas of recent months, it’s disappointing he doesn’t get a price cut for that reason. A solid figure, but not perhaps a standout except for already existing DRR!! fans.

Jel: Was Shizuo always that skinny? This figma looks like he was designed by Clamp or something. That aside, it’s cool to see anime’s Sexiest Man Alive still relevant in 2016. The traffic sign is a great accessory, and remember kids, smoking makes you cool! About the only thing missing is a vending machine to throw, but that would jack up the already way too high price tag.

Iro: His torso seems abnormally long, and the waist joint looking like underpants does him no favors. But hey, it’s Shizuo, complete with traffic sign to smack people with. It seems a bit barebones for the asking price, so I assume Aniplex is just trying to milk the franchise for all its worth while the last few episodes air before cutting and running. 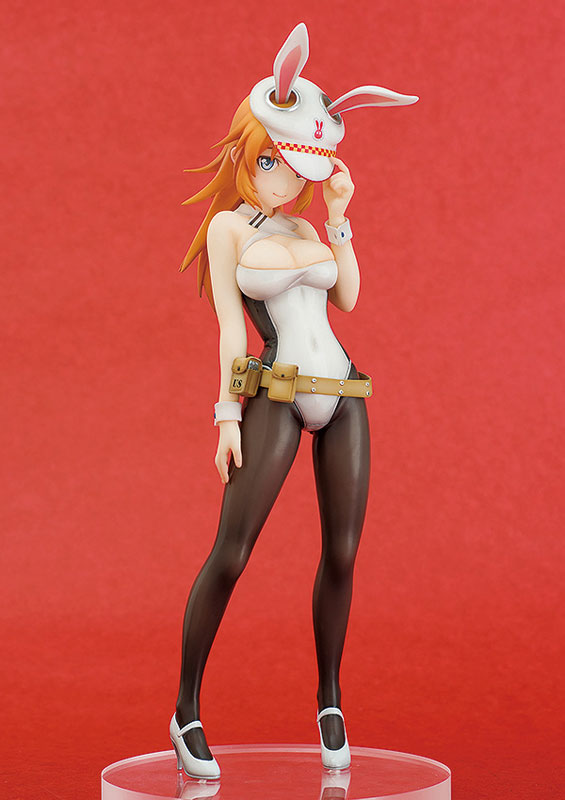 Zigg: OK, it’s still not what you might call ‘socially acceptable’ but at least someone made a Strike WItches figure with sensible legwear. That’s progress right? This is mostly here because I’m really into the flat cap, complete with stylish metal-edged cutouts.

Jel: What really is a Strike Witch without her weird creepy airplane legs? Just another bunny girl apparently. I appreciate the attempt at making her special with the military style belt and the nice cap, but otherwise this is super boring.

Iro: So does this character actually have bunny ears? She clearly also has human ears. Does that mean she has two pairs of ears?

Jel: LET THE MERCHANDISE ONSLAUGHT BEGIN! I love Osomatsu so much that my first instinct is to jump on this, but with the shows tremendous popularity I’m sure there will be plenty of better figures to save my money for. I’ve got my eye on the upcoming Jyushimatsu figma in particular, and I’m sure there will be more to come. That said, these are pretty cute and a pretty decent price for what is basically a set of poor man’s Nendoroid Petits. So if you can’t wait or you’re on a budget, not a bad deal.

Iro: Considering the astronomical BD sales of Osomatsu, we’re probably seeing the money train only just starting to roll out of the station. If you want to get in on the ground floor with a relatively cheap set of our favorite shitheads, this seems like a pretty decent buy. Honestly though, you probably only need Jyushimatsu.

Zigg: To establish – this is a figure of Vegeta that actually vibrates in fear. It’s such an absurdly weird and specific thing it’s kinda impossible not to be slightly into it, although I wonder how many people will actually commit money to such a joke.

Jel: Following in Yamcha’s footsteps, this is a hilarious trend I can get behind. What will be next? Tiny Krillin balloons you can over inflate till they pop?

Iro: Having run out of cool DBZ moments to make figures out of, I guess we’re moving on to silly ones. Have they made a figure of Chiaotzu hanging onto Nappa’s back yet? Or Cell barfing up Android 18?