Hello, and welcome to All Your Monies, where The Glorio Blog’s resident toy and figure collecting crew will run down the last week’s new pre-orders, turning a loving or scathing eye over what’s been put out for you to spend your hard-earned cash on. This week, after a few weeks off, we have a treasure trove of figures to dive into.

Zigg: It takes something special for me to notice a Saber figure these days, but this is a really nice rendition of Arturia in her slightly less common Alter version. That and the ‘Alter by Alter’ pun was just too good to resist. One of the strengths of Alter (er, the company that is) is that they’re really good at teasing out the detail in relatively plain designs. So we have a gorgeous mix of blacks, purples and midnight blues, some lovely silver detailing and a beautiful rippling dress that’s jsut different enough to be noteworthy. one of those figures that improve every time you look at it.

Jel: This is a lovely figure but Saber fatigue and the monochromatic colors make it hard to get too excited. I do love the silver filagrees and those boots are amazing, and I do appreciate it’s not particularly skeevy. It’s so hard for a Saber figure to stand out these days though.

Timmy: Very pretty, with the flowing black dress and the silver decorations. We don’t have too many Saber Alter figures so on that front this feels a little fresh, and I would love to display her alongside a very contrasting Saber Lily figure. Price is quite high though.

Zigg: It’s pretty inexcusable that this was made before a proper Tetra figure, but she’s still cute as a button and as someone who owns Link I’ve already got her on order. Bundling accessories for another Nendoroid with a different Nendoroid is always a dubious practice but at least they’re cool ones this time around.

Jel: This seems like an obvious choice if you already have Wind Waker Link, or even if you don’t and you just like the game. The face choices and bow are nice, although I’ve never been a huge fan of including accessories for another nendoroid. I think in this case it’s ok since a lot of people will probably buy both.

Timmy: Did you get nendo toon Link? Yes? Then you already know if you are going to buy Zelda or not. She looks nice though and while she doesn’t come with too much I can appreciate the accessories she does come with. 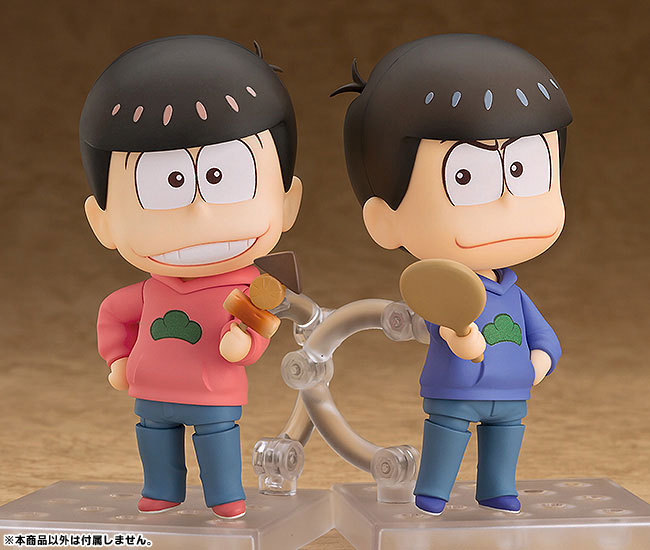 Zigg: Much much better than the figmas, since the Nendoroid style fits the character designs better and there’s been a much more generous selection of accessories. on top of that the coloured hoodies are much more suitable for this modern, hard boozing version of the siblings. And Karamatsu has sunglasses. Great choice of faces too.

Jel: OK, this is a big improvement over the extremely disappointing figmas. Having them wear their colored hoodies is a much better choice, but most importantly KARAMATSU HAS SUNGLASSES. The face choices are also great, although that dumb colored highlight in their hair still bothers me. I’m not going to shell out cash for either of these Matsunos, but come pre-order time for Jyushimatsu they might just get me.

Timmy: Jel, if you get one you got to get them all. Them’s the rules, I didn’t write ’em.

Zigg: I really like this, particularly the gorgeous turquoise blue of the skirt and the ruffled under-layer. The face and pose are pretty good too, and it’s distinctive enough to stand out on a shelf. I can’t understand the shoes though. The style of them doesn’t fit with the rest of the figure at all and they’re incredibly distracting floating on front of her. At least there’s the option to not display them.

Jel: I appreciate the attempt to dress up the most boring iM@S girl with some color, even if it’s still just a simple pale blue dress. The bare feet make sense I guess but the floating shoes are kind of weird, particularly since they don’t match the dress at all. Is there some kind of back story there I’m missing?

Timmy: I have always enjoyed floating figures, despite how unrealistic they may be,  and Rin here looks great in that reguard. Her dynamically flowing dress is lovely, especially for what would otherwise be a simple affair. The floating shoes does feel like an oddity, though. Finally the face is pretty and the price is real nice, so I think phat has a winner here. 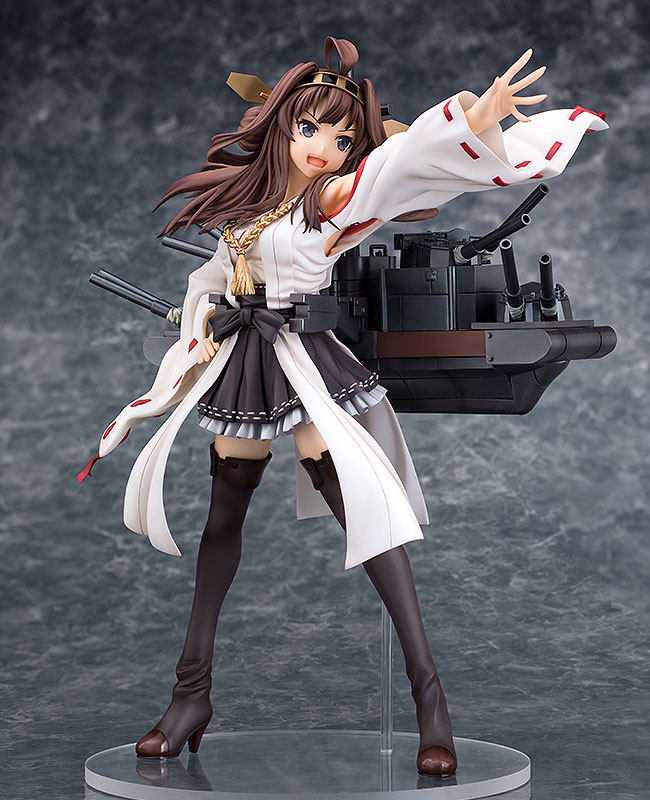 Zigg: An excellent figure that successfully defies the continuing fatigue around KanColle. It helps that Kongou is one of the less porn-tastic character designs in the game/show/thing and it’s nice to see one of the characters looking upbeat and agressive for a change. Great detailing too – Phat have really steeped up their game on this front in the last year or so.

Jel: The lack of “battle damage” and extremely confident pose make this version of Kongou pretty great. In fact, it might be one of the most impressive figures I’ve seen from Phat Company. The detail on her boots, ruffled skirt, and hair look right on par with Alter or Max Factory. Sure we’re all tired of KanColle, but if you have to buy one this seems like a pretty good choice.

Timmy: Definitely a fine figure of Kancolle’s best girl and while there is a lot of great technical stuff going on with that outfit, her hair sculpt is what really draws me in. Its both dynamic and meticulously sculpted and the result looks great. The gun platform is nice too I guess but part of me hopes it is removable. A great alternative to Max Factory’s “Battle Damaged” figure of her, but at a pretty steep price. 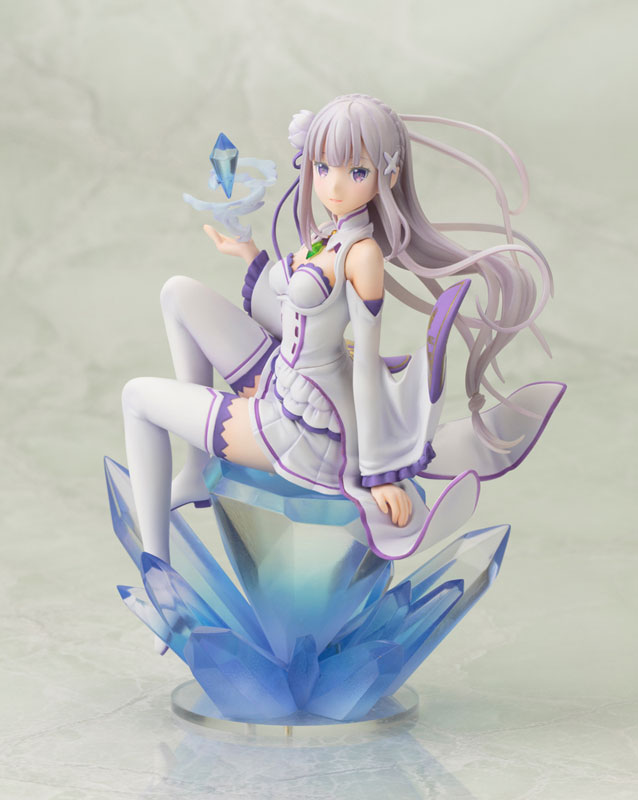 Zigg: Normally I like unusual colour palettes but this is just so overwhelmingly pale it sort of become underwhelming. That and the bland character design all conspire to make this feel a little underwhelming. i guess the base is cool, but it’s also so mcuh clear plastic it’s dangerously close to being tacky.

Jel: Well that was fast. Everyone’s new favorite waifu from the Spring anime season looks OK I guess, but her design is pretty much copy and paste from any fantasy light novel of your choice. About the only thing of note is the crystal base which is really cool, but the rest? Meh.

Timmy: Really digging the crystal theme going on here and I think the purple and blue combo works well. Face is pretty, hair is nice, and while I think that maybe the outfit could use some more dynamic sculpting with the folds and creases to make it pop it still works. A nice figure at a nice price.

Zigg: That is not how your spine works.

Jel: So is she the butt to Kongiku’s boobs? I’d say just stick with the classic Momohime.

Timmy: Alter once again does a great job capturing that Kamitani style and I especially love how the hair turned out. Same with the hard edged folds in the outfit. A nice base and parasol complete the figure and while alter presents a nice package they are asking quite a bit for it. Especially when they are rereleasing Kongiku complete with LED gimmick for 3,000 yen less.