Anime Original by Sunrise
Streaming on Funimation, Crunchyroll (outside US)

Inspired by μ’s, Chika Takami is determined to change her normal life by starting an idol club at her sleepy country school. With the conservative student council president opposed and seemingly no one else interested, assembling a group will be an uphill battle.

First the vital info for anyone wondering: this is not a direct sequel to the original Love Live! series, so you are fine watching it cold if you want. If you really think you’re going to be into this kind of thing I’m not really sure why you would want to start here and not on the other series but hey, now you know enough to make an informed decision.

That out of the way, I actually feel like I should compare this more to Kyoto Animation’s recent near masterpiece Sound! Euphonium than the original. Is that a good thing? Here’s what I thought while watching:

It’s Super Gay
Within the first 10 seconds of the episode I could already feel someone drawing fan art of Chika and Riko making out. They fill the roles of the cute overachiever and the pretty, talented girl respectively. Well, I’m assuming Riko is talented if she’s so into playing piano, we’ll see. I think the main trigger is how Chika seems to be pining for Riko in her narration, much like Kumiko did for Reina.

It’s Super Pretty
While the character designs are pretty bland, the actual animation and background art is really top notch. The cameraman also has a habit of starting and ending every shot on the girls’ thighs, to the point where it might it even be more excessive than “Legs! Euphonium”.

It’s Super… Try Hard?
The “finding your passion” theme is pretty universal, but something about pursuing it through the context of these two girls’ relationship felt somewhat similar to Euphonium. Of course, Chika just flatly dumps her dreams into Riko’s lap in one scene, cutting out all the scintillating back and forth dialogue we saw between those other two girls. But my mind definitely moved in that direction.

So am I saying this edition of Love Live! is like Sound! Euphonium and therefore you should watch it? Nope! While there is a similar vibe going here, the dialogue is straightforward and dull, the characters are one dimensional, and I can’t see any real drama or tension developing as we move along. At its core, it’s a cute and generally harmless idol show with exceptional production values, and that’s fine. I still don’t understand the appeal of something like this over the more diverse characters of Idolmaster or the weird charm of something like Locodol, but maybe that’s why it reaches such a broad audience. If that’s your thing, cool, I’ll stick to Macross Delta for my idol fix. 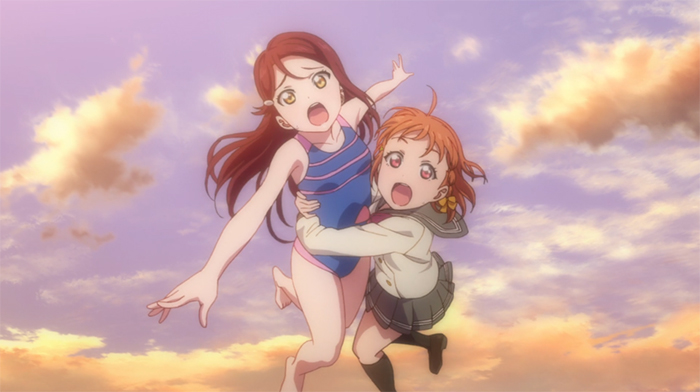 Watching this was torturous, in that the show is absolutely not my thing and I was consequently bored out of my goddamn mind, but I promised Jel he wouldn’t be alone on this post. It’s incredibly pretty, though; I wish Sunrise would put this kind of money and effort into Gundam. Alas, the sad reality is that their idol mobile game franchise makes truly stupid amounts of money, so that’s where the money goes back to.

Love Live! doesn’t deserve to be hated. It’s not a wicked misogynistic power fantasy, a tepid, shameless hackjob or a blatantly dishonest melodrama, yet still there’s always been something about it that infuriates me to no end. Whether it’s the franchise’s overall banality, awful character designs, generic music, questionable whitewashing of the idol world or simply the all-encompassing grip it and its rather fervent and overdramatic fandom have on the anime community as a whole, Love Live! and I just don’t see eye to eye. Yet it’s not healthy to hate something you don’t know, so I decided to try and give this first episode of Love Live! Sunshine!! its fair chance. And yeah, sure, there’s no use in denying that it’s pretty entertaining fodder, though I still fail to understand why this franchise continues to be as massive as it is. Rather ironic for an episode all about the inspirational potential of idols, if you ask me. It’s almost as if idols are only perceived as inspirational because marketing suits said they ar– right… I was gonna go into this with an open mind, wasn’t I? 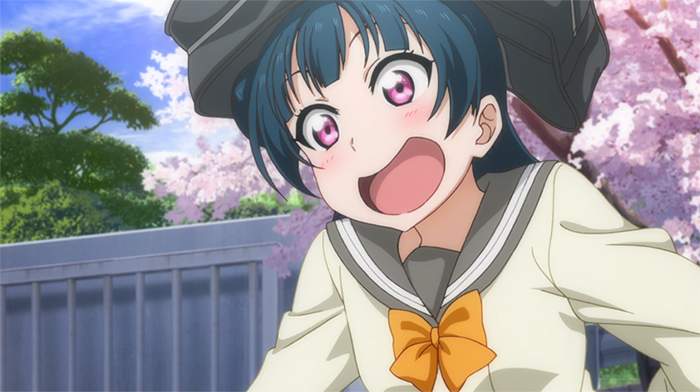 So. Despite being outstandingly pretty and quite funny in that endearingly dorky kind of way, Love Live! Sunshine!! doesn’t exactly try hard to rope in new viewers. The plot is thin as film and the main characters – ranging from entertaining ( Yohane) to insufferable (Hanamaru) – act so inhumanly chipper they make the cast of K-ON! look like a disciplinary committee. Sunshine!! is obviously at its best when it uses its massive budget to make these quirks, err, shine, with little animation flourishes like Dia hurting her hand or pretty much everything You does standing out amongst an already stunning-looking episode. On the other hand, the sheer vivacity of everything going on here also made me realize that there is, in fact, such a thing as too much animation. Characters wildly gesticulating during casual conversation like Italians who’ve had a few doppios too many is one thing, but dramatic revelations coming just close of literally blowing people off their feet is simply ridiculous in the worst possible way.

Equally cringeworthy is the saccharine vapidity of it all. In the world of Love Live!, all problems are solved with the power of friendship, jerks are jerks because they simply haven’t been converted to idol-dom yet, and finding a dream to give your life meaning is as easy as throwing your hands up into the air and saying ‘school idol!’. Predictably, Sunshine!! smears the homoerotic tension on as thickly as it can get away with, yet it remains to be seen whether all that flirting will actually amount to any meaningful character development like in Sound! Euphonium. Funny how the same people who slammed that show as queerbaiting because it dared to have a male character in it will happily gobble up the almost pathetically manufactured fluff in Love Liv– oops, there is that chip on my shoulder again. Anyway, Love Live! Sunshine!!‘s okay, despite having a title that looks like it’s missing a couple of emoji. It’s decent. It’s fine. It’s something I, as a fan of stuff like K-ON! and HaNaYaMaTa have no justifiable right to hate.

Which I’ll nonetheless start doing again once this PCP has worn off.