All 13 episodes of ReLIFE have been made available on Crunchyroll at once, Netflix-style, but these first impressions are based solely on the first episode.

After an unfortunate incident caused him to lose his job, Arata Kaizaki has been struggling to return to the job market. One day, however, a man named Ryo Yoake approaches him with a proposal that seems to absurd to be true. Yoake claims to work for the ReLIFE Laboratory, an organization tasked with ‘rehabilitating’ NEETs (Not undergoing Employment, Education or Training) like Kaizaki by sending them back to high school for a year.

For the longest time I’ve felt like I was too old for anime, just because I wasn’t in high school anymore. This is, of course, complete hogwash. Anyone over the age of thirteen is too old for anime. Regardless, it’s not because an anime is set in high school, that it is actually intended for high school students. Lads like Arata Kaizaki are far more likely to be anime’s target audience – people who’ve long left their teenage years behind, are stuck working dead-end jobs or struggling to find one, and long for the good old days of youth and opportunity. Anime has latched onto this nostalgia like a tenacious leech, and has over the course of just a couple of years developed a wealth of tropes about what this ‘ideal high school life’ is supposed to look like, eventually creating a vicious circle where regretful nostalgia has been all but entirely replaced by a kind of chauvinistic entitlement. Whether it’s in the form of an ideal high school life, a virtual reality video game or a reincarnation in a fantasy world, stories about geeks getting to live the life anime has promised them are anime’s current cash cow, so I wasn’t surprised in the slightest when my colleagues went into ReLIFE with skepticism at best.

Luckily, ReLIFE eschews many of the tired devices of escapist fantasies like Sword Art Online, Overlord or Ultimate Otaku Teacher, and takes a somewhat more playful approach to the nostalgia that drives them. After agreeing to Yoake’s proposal in a drunken stupor, Kaizaki soon finds the high school life to be far less idyllic than he’d made it out to be: he’s forgotten all about the maths, history and English he once crammed during his original stint as a student, now de-aged back to a teenager has to forfeit some of the independence adulthood has granted him, and the other pupils in his class might as well be speaking another language. Yet aside from teaching Kaizaki (and similarly deluded viewers) that high school is not all sunshine, lollipops and panty shots, the ReLIFE initiative is also here to help him. This first episode hits its highest mark when Kaizaki, after freaking out about the fact that his homeroom teacher is in fact, younger than him, wryly admits that even so, at least she seems to have her shit together.

It’s this combination of farcical stranger-in-a-strange land goofs and legitimate life lessons that characterize ReLIFE at its strongest, and the excellent directing does a great job at filling in the blanks between the proverbial lines. The same cannot be said of the overall visual presentation, however. While Arata’s array of goofy facial expressions bring the laughs in spades, ReLIFE’s drab visual palette and generic character designs make it look both inferior to the full-colour manga and ten years older than it actually is, while the jazzy soundtrack is comprised almost entirely of simplistic, synthesized loops. Regardless, it’s worth mentioning that ReLIFE‘s unique release schedule shows that the show was finished in its entirety before it even went on air. If you’ve seen Shirobako, you’ll know that this is a rather noticeable feat for an anime of this caliber, and a strong indication that ReLIFE‘s dull visuals at the very least won’t be getting worse. Furthermore, the show’s generally bland look is mitigated by a well-considered distribution of its efforts – resulting in natural performances, subtle character animation and ridiculous over-reactions that accentuate ReLIFE‘s cardinal draws, which in themselves are more than enough to keep this show on my radar.

Iro’s verdict: Its Potential May Be Used For Good Or Evil

This seems cute! Or at least, it could be. Personally, going back to high school for a year sounds like pure hell, but I could see ReLIFE being a vehicle for a heartwarming story about reclaiming the youthful joy of life or something. On the other hand, it could be a creepy fetish story about grown-ass adults hanging out with the fabled high-school girls. It doesn’t seem like it’ll take that route, since I imagine The Big Twist is that his main love interest is going to also be a ReLIFE subject, but it is enough to make me wary. At the very least, the goofy facial expressions are fun and I actually quite like the minimalist soundtrack, so I will consider watching a few more episodes.

(Side Note: This reminds me of a weird manga that I never got around to for Random Manga Theatre called Sumire 16! where a middle-aged man marionettes/ventriloquizes a life-size puppet of a high school girl through “her” high school career. It’s actually pretty good!)

I was probably one of the least sceptical members of the Glorio team going into ReLIFE, yet I can already tell this show isn’t for me. Not because it’s bad – I quite like the simple but bright and cheery artwork, the also simple but yet peppy soundtrack, and at least some of the cast – but I can’t help but feel this is going to be a hugely wasted opportunity. We have a premise that actually allows this anime to say something meaningful about Japanese society and the working culture that surrounds it, or even just about the separation between school and adult life in general. Heck, I’d even settle for something blander about how time moves on and leaves everybody not right in the thick of the ever-changing teenage slang and continually developing social media behind. 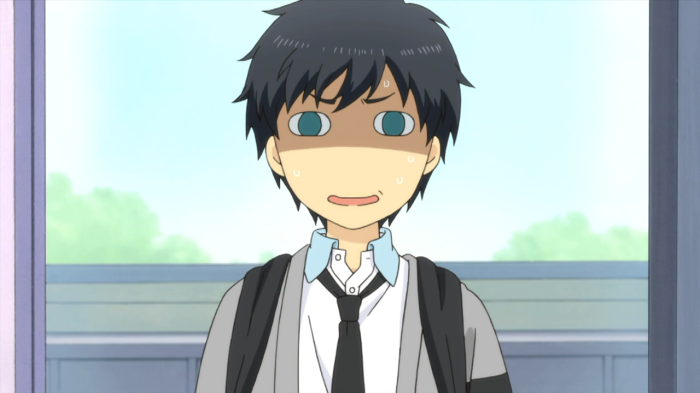 Disappointingly, I’ve seen almost nothing to suggest that ReLIFE is going to be anything other than yet another high school drama/romcom, with all the usual character archetypes, comical misunderstandings and tense love triangles that entails. The odd glimmer of something a little deeper or more complex is there, but the next second we’re back to treating the premise as though it was just a wacky excuse to get people to watch their hundredth high school slice-of-life anime without deciding they’ve seen it all before. Which they have, since all the actually interesting material is used as little more than window dressing while the typical teen drama takes front seat, when really it should be the other way around. ReLIFE will probably be a perfectly decent show but going by the first episode, I don’t think it’ll turn out to be anything more, and that’s a real shame.