Despite having met over half a dozen potential new members in the span of a single episode, Chika still hasn’t come any closer to realizing her dream of starting her own school idol group. When Riko refuses her offer for the umpteenth time, Chika and You set out to help fix whatever it is preventing the transfer student from joining their club. By any means necessary.

I’ve never been a big fan of blogging anime on an episodic basis, so nowadays I only do so when a show makes me want to talk about it. That doesn’t necessarily make it a good show or even a very popular one, but at the very least an interesting one. And after watching its first episode, I was surprised at how interesting Love Live! Sunshine!! turned out to be – not only compared to the second-hand biases I needed closure on for strictly selfish reasons, but also to the state of anime in the year 2016, a state it is arguable both partially responsible for and at the very centre at. Long story short, I’m not ready to let Love Live! go until I’ve figured out what makes this corny, manufactured fluff such a global phenomenon. So here I am.

Anyway, what kind of boundaries does Love Live! Sunshine!! push in its second episode? Where will it boldly go where its beloved predecessor has never gone before? What complex characterization does it introduce to prove that the moths of hype were justified? Oh, it’s stage fright again. Great. Just as we’ve cleaned the last bits of Your Lie In April‘s bitter aftertaste from our palates, in comes Love Live! with a near-perfect replica of that show’s entire first half in a single episode, from the traumatizing performance gone silent all the way to the issue being overcome by a manic pixie dream girl all but harassing the victim back on stage with hollow speeches about friendship and magic and the former being the latter. The single strongest scene of this entire episode was Riko’s brief breakdown on the balcony, where she squatted down with a sigh and all but admitted to Chika how hard depression had made life for her. A powerfully directed, disarming little moment, ruined immediately afterwards by Chika solving the entire thing by chirping about school idols for what has to be approximately the dozenth time. An excellent opportunity for the show to truly inspire, wasted by a tired, saccharine cliché that revealed Riko’s subplot to be little more than an obligation, a hackneyed distraction intended as little more than an obstacle on the road to unconditional idol worship.

I don’t get that. Is vapid nonsense like this what makes Love Live! such an inspiration to so many people? Why do idol groups in anime so often come together through shady coercion and back-alley psychiatry? Are the joys of stardom truly so superficial that not even the godmother of idol anime can come up with a better message than ‘idols are the best because they make anyone smile with their mere presence’? Or a better way to make said message clear than by reiterating it over and over again? Love Live! is a frustratingly seclusive anime in this regard. It fails to even grasp the idea that someone wouldn’t worship the very earth an idol has walked on – as even the dastardly uptight student council president turned out to be a closet µ’s fan. Love Live! doesn’t even preach to the choir so much as preaching only to itself in the mirror, in its room, with the door locked, but that kind of preaching won’t convert anyone outside your church. Nothing wrong with that per se, but when this much money is at stake, Sunrise’s complete disinterest in swaying nonbelievers can’t help but have me baffled. 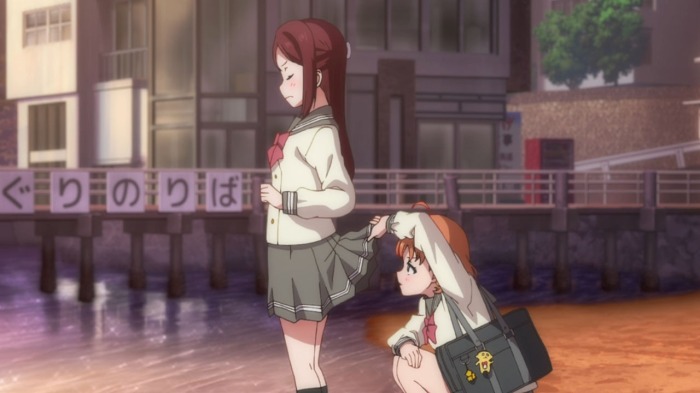 By far the most frustrating thing about all this is that in spite of this enforced exclusivity, Love Live! seems entirely aware of its own bullshit. It constantly edges between throwing knowing winks at people frustrated by its characters’ childish behavior, and unapologetically advocating it, to a point where I honestly can’t tell anymore if Chika is actually supposed to be the pest she comes across at. While Dia was almost comically unsympathetic in the pilot, this episode all but begged audiences to cheer her on as she tore into Chika like a chainsaw working overtime, and from virtually everyone else as well our purported protagonist gets the kind of treatment someone who refuses to shut up about their diety of choice would realistically get. So what is it, Love Live!? Are we supposed to relate to the overzealous space cadet, or to the people who’re forced to tolerate her? It wouldn’t be the first time that anime has preached the ‘don’t think, scream’ doctrine as the one true way – case in point, last season’s Kiznaiver – and Love Live! Sunshine!! seems to be following suite, despite the motive meant to justify Chika’s borderline sociopathic ambitions being flimsier than its attempts to convince it actually gives two damns about homosexuality. My personal doctrine remains ‘Show, don’t tell’, so if you wanna sway me over to Chika’s side, you really are gonna have to provide one hell of a reason to explain why she can’t shut up about a group whose name she can’t even pronounce, Love Live! That kind of crap might work on the glowstick-waving masses, but some of us have standards.

Speaking of standards, on the music side of things, Sunshine!! is still thoroughly failing to make any lasting impression. The opening theme sounds like the work of someone who has just heard a song for the very first time and thought that two can play that game, an unruly mess of cutesy yelps and motivational quotes without any sense of melody or structure. Besides, idol pop is the only genre in all of music aside from metalcore to use gang vocals, and given the fact that no one in the universe takes metalcore seriously, that should tell you enough. Never have more than three people sing more than a single bar together, lest you wanna ruin the very reason why you’d have more than three people in your group in the first place. Harmonizing is where it’s at nowadays, this ain’t the 11th century. Or a moshpit. The ending is a bit better, as though a catchy hook is still nowhere to be found, You and Yohane considerably liven up an otherwise derivative ballad that seems more concerned about telling you who you should ship with whom than about being musically redeemable. The sheer amounts of hugging, petting and hand holding don’t quite reach the level of this episode’s ridiculous final scene, in which Chika and Riko pull off daredevil acrobatics just so they can hold hands from their respective balconies, but they do express a sentiment that has me a bit worried.

You see, I’m glad that queer girls can relate to Love Live!‘s copious touches and feels, even if it is obviously intended for a straight male audience, but I do worry how long this kind of half-assed teasing will stick. Just to check, Sunrise, but you do know that if you want to make a show about girls falling in love with each other, you can just make a show about girls falling in love with each other, right? By charging every single interaction between every single character with Wuthering Heights levels of romantic longing, you could end up marginalizing an entire spectrum of possible relationships, enforcing how friends or couples should or shouldn’t act towards each other, perpetuating the very same clichés and stereotypes a lesbian subtext could defy (“they’re not in love, they’re just really good friends!“) and generally wasting opportunities to make queer relationships visible in popular media by confining them to the realm of schmalzy anime idealism tailored entirely to what people of entirely different orientations think these relationships should be like. In short, anime could do with a lot less queerbaiting and a lot more queer matin– Err, yeah, well, you know what I mean. Less sizzle, more steak, and all that.

So yeah. Is Love Live! Sunshine!! a good show? No. But is Love Live! Sunshine!! an original show? Err, also no. But it sure as hell is an interesting show, despite its derivative plot, predictable twists, boring characters, terrible music and general lack of creativity. All criticism aside, for once, Kazuo Sakai’s directing is genuinely phenomenal, with his eye for comedic timing making this show the rare anime that is sincerely funny. Sakai’s snappy style singlehandedly makes Sunshine!! far more entertaining than the sum of its parts, which is arguably what explains my desire to so thoroughly dissect said parts. I haven’t enjoyed criticizing an anime this much since Psycho-Pass 2, so it’s safe to say I’ll remain on this strange, strange train for just a bit longer.