Summer is over and we must prepare to say goodbye to our Roundup shows. Sweetness and Lightning is the first to go, with everyone else setting us up for their finales. So enjoy these fun episodes while you can and save those tears for next week.

Jel: As this episode progressed like any other episode of Sweetness and Lightning, I began wondering if they would do anything special for the finale. I guess you could argue Kotori’s hot celebrity mom finally showing up was a bit of a curve ball, but the end result was all the same. I’m not complaining, in fact I think it’s best this way. The show’s greatest storytelling strength is the restraint it has shown, whether it’s how they’ve addressed Tsumugi’s mom passing or the subtle dance around the relationship between Inuzuka and Kotori. Why change things now? They did also state the most important message of the show as openly as they have ever have: parents are regular people who make mistakes and don’t always know what to do, but they sure do love you. Now go call your mom or dad, you ungrateful little brat.

Artemis: This wasn’t a bad episode, but I’d be lying if I said I wasn’t getting impatient to just get to the nationals already. Most of what happened this week was actually pretty important to the overall story and themes of the show – including, finally, Haru’s heart-to-heart with his sister over his quitting judo – but it also felt like stuff that could’ve been condensed into previous episodes. Cheer Boys is a pretty slow-paced series and while I’ll take that over rushed any day, I do think it could’ve easily shaved a couple of episodes off the total and still felt reasonably fleshed out. But hey, we’re here now and it was a nice enough ride, and it’s time for Cheer Boys to deliver on all this buildup; I’m hoping for a strong finish for this underappreciated title.

Jel: Wow, this show somehow found a way to navigate the cliché cultural festival episode with a unique art club spin and without getting totally skeevy. Once again, I’m impressed. I feel like this could have actually been the final episode, right down to the slo-mo group picture at the end. As we watched the club come together and work really hard on an actual art project, it highlighted how close and comfortable they’ve become. That was the point of the show, right? Even the side characters got their little cameos and I was pretty much convinced this was the end until I saw the preview for next week after the ED. So having pretty much tied a bow on everything else, I’m assuming the final episode will be addressing the relationship between Usami and Uchimaki, which will probably end with her getting some kind of sliver of hope that he can change. I guess that would be alright but this show has been constantly exceeding my expectations, we’ll see if they have something better in store for the finale.

Jel: OK, let me get this out of the way: in the time I’ve spent taking care of kittens I’m pretty sure that A. they need to be fed a LOT more than they were feeding that thing and B. an adult cat would most likely want to murder it. This is the perpetually optimistic world of Amanchu though, so I’ll let that all slide. That aside, this episode made me realize that while I’ve enjoyed this show quite a bit I am ready to move on. Teko’s character development arc is essentially complete, she is aware of the changes she made and the importance of Pikari in her life and while surely her anxiety will continue the initial change is complete. Adding a tiny kitten was adorable and made for a cute episode, but using it as a metaphor was just overkill. Thankfully, we are nearing the end and the final test for Teko, so Amanchu will avoid overstaying its welcome. I’m glad because I really liked this show and I want to stay positive about it, and I’m looking forward to seeing how it ends. 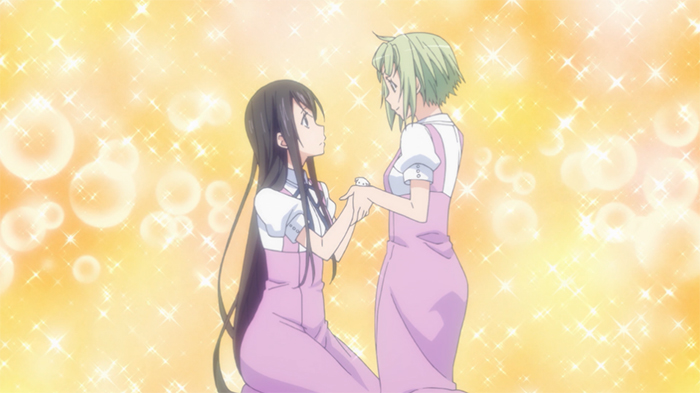 Amanchu – This isn’t really about the kitten, is it?

Jel: There’s no turning back now. With Corteo’s blood on their hands, I’m pretty sure the entire cast has to die now. Avilio murdered his brother, making him no better than the people that murdered the rest of his family. They laid it on pretty thick in the first half with the date night back home so it was obvious Corteo was going to die in the end, and yet it still made my stomach churn a bit when the final moment arrived. As with every revenge tale, I’m sure the message will come back around to remind us of how destructive and pointless it really is, but in the the meantime we’re now left with no heroes to root for. We want to see these horrible, irredeemable people get punished for their actions, but who will do the punishing? Will they all just kill each other in the end? It all feels very empty and hopeless and I like it, mostly because I don’t know how they are going to turn things around or if they are even going to at all. That said, how they wrap this story up is going to very heavily sway my final opinion on 91 Days, so we’ll have to see how it goes.

Artemis: Orange was on top form this week with an episode that, on the surface, looked almost filler-like but ended up delivering one of the biggest emotional punches of the series as a whole. While almost everything so far has been from Naho’s point of view, this episode told Kakeru’s side of the story – and not the story of the present that was altered thanks to the letters, but instead the one that originally played out, ending of course in Kakeru’s death. Instead of re-living all the good moments that Naho and co. managed to bring about through their changed actions, we saw every single major event that the letters foretold without intervention, and it was rough. It was very easy and honestly quite horrifying to so clearly see and feel exactly what Kakeru was going through as grief and guilt dragged him further down, particularly the scene where he confessed what he was going through to his old school ‘buddies’… only to have them collectively believe (or possibly pretend to believe) that it was all a joke. I have no idea how Orange is going to wrap things up in just one more episode, but if it plays on my heart like that again you’ll probably find me sobbing into my pillow by the end of it.