Japan starts the PR cycle for the new sport they’re adding to the 2020 Tokyo Olympics.

I am not sure how I can pitch this show in a way that doesn’t make it sound terrible. This might even be okay; in many ways, it is terrible. The characters are tropey, what little of the plot we’ve seen is predictable, and good golly if it isn’t exploitative. But, try as I might, I cannot in good conscience condemn it. There’s something here to enjoy.

The plot here is familiar sports anime schtick; new students are joining a school that specialises in a sport, and we follow the ones interested in joining the team. The sport in question, the titular ‘Keijo’, is a combat sport played on floats on a swimming pool in which fighters are only allowed to make contact with their breasts or buttocks. If a player falls off their feet or into the water, they are out. It is transparently an elaborate excuse for titillating fanservice, and to expect anything else out of it would be absurd. 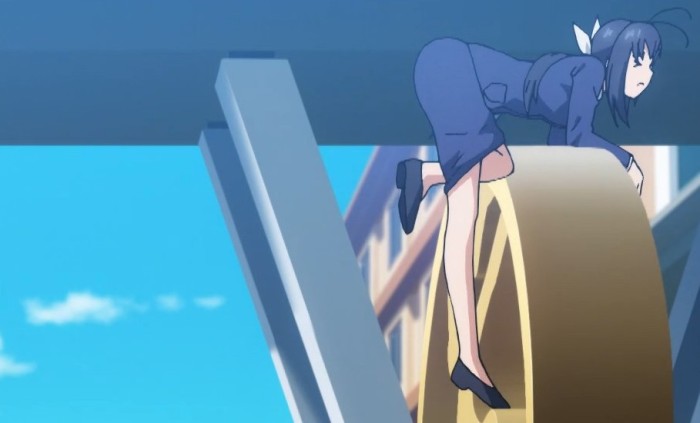 It is with this very low bar, however, that I must deliver the news that the first episode of this show is genuinely enjoyable. Perhaps it’ll stumble once they settle into the budget they have for episodes two and onwards, but most of episode one is spent in fight sequences that are beautifully presented and not nearly as pornographic as the premise of this show might have you believe. Granted, that’s not saying much, but I assure you there’s an earnestness and craft to the action in these sequences that I think you’ll struggle to not appreciate.

The moments outside the fight scenes, though, are predictable, dull, predictable, and dull. We are introduced to some extremely familiar-seeming characters, and nothing unsurprising happens to them. Perhaps that’ll change as this show continues, but I wouldn’t hold out hope. Keijo is going to get very boring very quickly unless the animation budget for the fight sequences remains high, or the plot takes an unexpected turn. I’m not holding out hope for either.

This was terrible, but if you at all enjoy shonen sports/battle shows where people whip out bizarre special moves and keep running battle commentary in their heads, you should probably watch the first episode. Keijo!!!!!!!! follows all of those conventions and cliches to the letter, just instead of tennis or football or wrestling, the sport is butt fighting. I would never watch any more of this, but I was at least laughing my ass off at the sheer audacity of making One Of Those Shows about butts, and that’s worth something.

I still can’t quite believe I’m saying it, but… you should consider watching the first episode of this if you’re somewhat into shounen. It’s an awful show and literally every conversation in episode one has been a boring attempt to explain that butt fighting isn’t weird, but that’s not why you should watch this. Think of a few overused shounen tropes, for example the cutesy character who turns sadistic while fighting, or the person that can attack so fast that no one around them can see what happens… then add boobs and butts. That’s what this show is. I spent most of the fight scene completely speechless, going from complaining about how awful the show was to being dumbstruck when it goes all-in. Do not get me wrong, this is a bad show and I’ll be surprised if you give it more than a single episode, but you kinda need to know.