“Classicaloid” versions of classical music composers like Beethoven and Mozart have appeared in modern day Japan. They look like normal people (in slightly weird clothes) but when they play their “musique”, very strange things begin to happen.

I had high expectations for this show and for the most part they were met. Right from the cold opening on, I was charmed by the oddball but strangely appropriate interpretations of Beethoven and Mozart, not to mention the colorful, unique art style. The episode builds a sound emotional base before exploding into a creative dance of colors and music that was one of the most fun scenes of the new season. Having seen Beethoven’s “musique” come to life I’m looking forward to seeing how the other composers are treated, although it will be hard to top the grand ball with dancing robots that we got in episode 1. 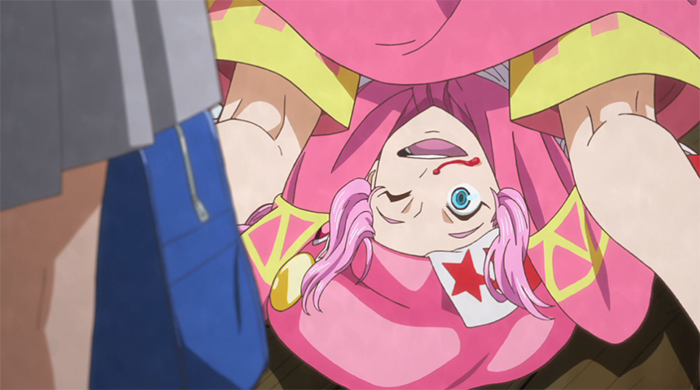 That all said, why am I not more excited about Classicaloid? One reason is a bit unfair: shows like Yuri!! ON ICE, March Comes In Like a Lion, and Flip Flappers have set a very high bar to reach for this young season. Having seen those great debut episodes first, watching something that is just “good” seemed a bit underwhelming. I have other more legitimate concerns as well. I know this is supposed to be a weird and wacky comedy but the characters a bit too one dimensional, to the point where I was already getting tired of their jokes. Kanae is the straightwoman, Sousuke is a loser, Beethoven really loves make gyoza, Mozart is a weirdo who skates around on wheelies… got it the first, second, third, and fourth time, now let’s move on. They all have the opportunity to show a more sympathetic or at least different side of themselves as Kanae struggles with her situation but none of that happens.

So instead, I’ll be counting on the variety provided by the other composers as they are inevitably introduced (as antagonists no less!), which still has plenty of potential to be fun and creative and weird. At the very least I find Bach in sunglasses as the main villain amusing. I still see plenty of potential in Classicaloid, but my expectations are somewhat lower than they were before.

At least a few viewers out there will think this is one of the funniest and most original anime shows ever created. Just not this particular viewer. I’ll say this for ClassicaLoid, it has enough energy to do whatever it wants without coming across as outright dumb – or rather, it’s dumb as all hell, but given that it seems ready to commit to absolutely everything 110%, it sort of reverses right back around to being cool (or at the very least not painful). There are some genuinely funny moments sprinkled in as well, most notably the ones that manage to mix genres and poke fun at anime stereotypes (that heavy machinery gimmick was pretty good), and the timing for a lot of scenes is spot-on. However, other scenes start off amusingly enough but drag out far too long, including the whole gyoza thing, and I can certainly see how people might feel the entire show is trying to be too… well, gimmicky.

I also can’t help but think that the entire premise would be way more interesting without the involvement of our two ‘normal’ characters. Think about it, an anime with just Beethoven, Mozart, Bach, etc. having to co-exist and get by in modern-day Japan or wherever? Saint Young Men pulled it off with aplomb, and ClasscaLoid could’ve easily kept the same idea relatively fresh since there’s already the promise of having an actual antagonist. No need at all for Kanae and Sousuke, whose characters add nothing much of value and just naturally fade into the background in comparison anyway. What we’re left with is basically a mixed bag, and either you’ll like the colourful, purposefully over-the-top presentation or you won’t. Altogether it’s not a bad show, but is lacking anything that would make it great.