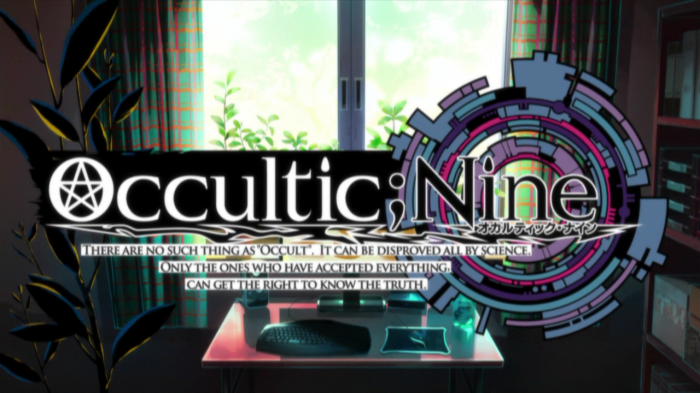 Yuuta Gamon is a self-declared NEET running an affiliate blog on occult phenomena and gonzo rumours. Also, there’s a spirit medium at his school who’s also an idol, there’s a grumpy dude in glasses and a kid in a fedora and a goth who finds someone’s scalp in her mailbox. And a journalist who is investigating into some professor who gets killed. Oh, and a bunch of people drown. I think?

Okay, first things first, Occultic;Nine? You can’t call yourself a NEET when you’re actually in high school. NEET is an abbreviation that stands for ‘Not Employed, in Education or Training’ and therefore cannot be applied to someone who is in high school, which is, as far as I know, still an institution of education. Or didn’t you see that second there ‘E’? ‘NEET’ isn’t some type of trendy but thoroughly trivial title teens can take for themselves, like ‘gamer’ or ‘brand ambassador’, just because anime apprised them that being an atheist anchorite awards you astonishing abilities and makes you amazingly attractive to anyone without an Adam’s apple, but Occultic;Nine brings the medium’s perpetual pandering to presumptuous Poindexters to its perverse peak, presuming people presently prefer possessing the privilege of pointing to themselves as NEETs even when they, as a matter of fact, do enjoy excellent education or economically effective employment – what a world we walk on! 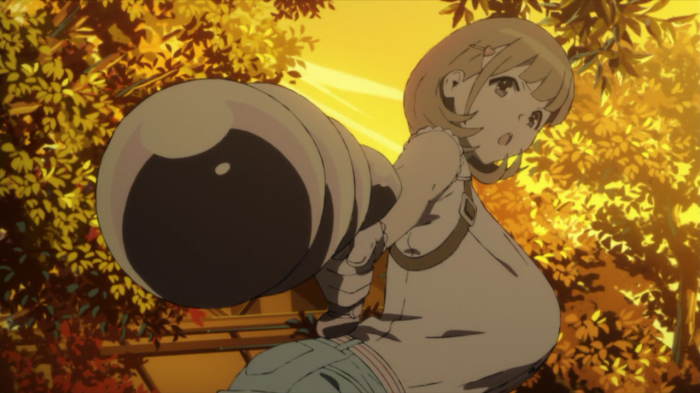 Now, did reading that sentence stress you out? Did it feel overly long, badly written and annoyingly pretentious for no apparent reason? In other words, are you a human being, and not a hive mind consisting of several brains in jars? Then stay as far away from Occultic;Nine as possible. It’s a gibbering, hackneyed mess of a show, a vicious assault on the senses that spits out meaningless banter at a dozen platitudes per second and overwhelms viewers with a tidal wave of dense, bizarre, yet utterly meaningless babble. At least Bakemonogatari had the decency of allowing its equally insufferable chatterbox of a protagonist to vomit his spiderweb of incomprehensible puns and unwarranted metalepses at a relatively casual pace. Occultic;Nine, on the other hand, just drowns out any attempts to process, let alone notice what the hell it is trying to tell or show you with a near-constant barrage of unfiltered white noise. Watching it is like trying to read a John Green novel while your dumb brother is blasting Napalm Death at maximum volume in the next room over. You probably won’t even remember what it was about, except that it involved a girl with a gigantic tumour and a pretentious twat who talks like a Twitter bot. Avoid at all cost.

Iro’s verdict: What the FUCK

…is going on? Anime often moves too slow, but Occultic;Nine moves so goddamn fast that any plot it has is incomprehensible. All I got was that the main guy runs a shitty blog, and that barely seemed to factor into anything at all.

…is with her boobs? Go to the hospital. That can’t be healthy.

…is with the art? Actually, the art was fine, barring Boob Monster. The backgrounds were pretty nice. Well that was a steaming hot mess. Occultic Semicolon Nine seems to be under the impression that if you take a bunch of ‘wacky’ characters, give them all some ‘wacky’ dialogue, and speed things up so that it’s genuinely hard to keep up with who’s saying what and why, it’ll be a show that all the cool kids want to watch. I guess I can’t speak for the cool kids but what I can say is that the frenetic pacing did this premiere absolutely no favours, not even when it came to making the episode seem to go any faster so I could stop watching already. I can’t remember what the plot was (assuming one was introduced at all), but I do remember the hi-larious jokes about boobs. It’s funny because that one chick’s bust is big. Honestly, one of the only decent things I can say about the series is that is has some detailed and intricately coloured artwork – and unfortunately even that doesn’t do anything for me in this particular case, since it only added to the sense of rambling and pointless confusion. I sure hope the voice actors are getting paid a decent amount, because they’re giving it their all but dear god the writing is terrible.

One thought on “First Look: Occultic;Nine”