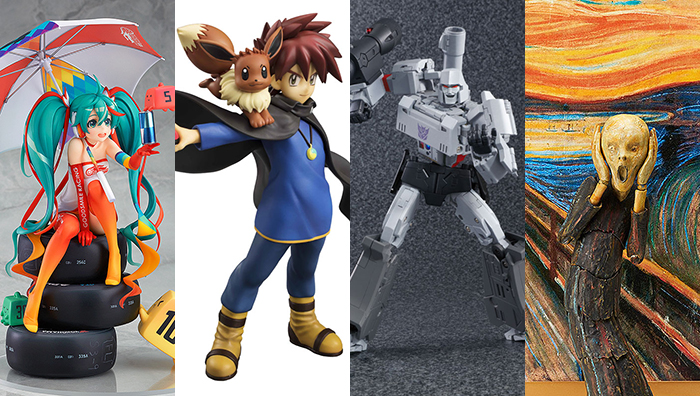 Hello, and welcome to All Your Monies, where The Glorio Blog’s resident toy and figure collecting crew (and Iro) will run down the last week’s new pre-orders, turning a loving or scathing all-seeing eye over what’s been put out for you to spend your hard-earned cash on. This week the crew are still battling illness but nothing can stop the march of plastic waifus, giant robots and Expressionist icons of despair. 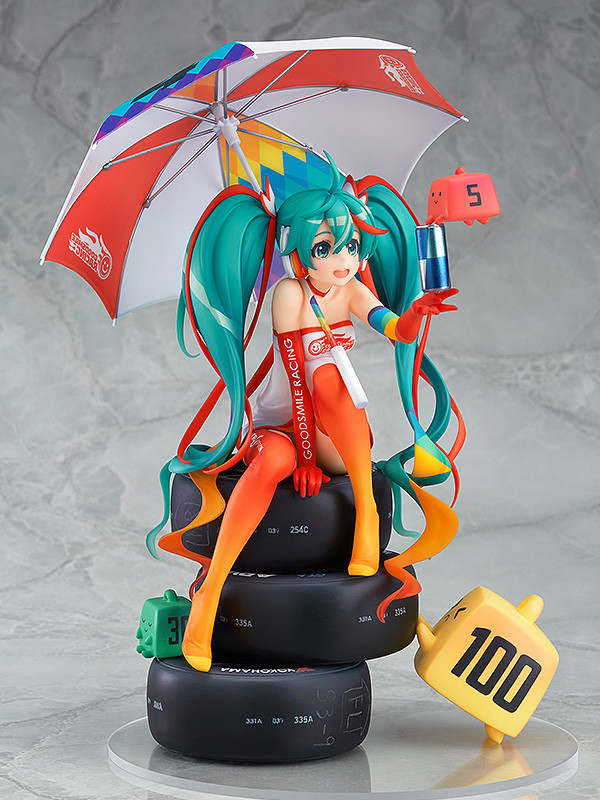 Zigg: GSC’s annual Racing Miku designs continue to be weird but exceptionally high quality deviations for the character, and I think this is probably the best one they’ve done yet. Not only do we get more actual, y’know, racing what with the umbrella and stack of tires, but there’s also the pleasant return to a more bright and varied colour scheme with plenty of scorching orange. Then there are the delightful little anthropomorphized weights, which I have no context for but are charming as hell. Even the pose is more natural and relaxed than a lot of the more cheesecake-y Miku stuff we see, and as always detailing is beyond reproach.

Jel: I’m glad to see after all these years that GSC is still putting effort into making the annual Racing Miku interesting. This might be my favorite one yet as it certainly feels like the most creative. All the weird little details like the sentient weights are really eye grabbing, but I also really like her pose and expression, like she’s just hanging out on the sideline during the race. Really nice work.

Iro: The era of Miku continues, though this one at least has enough bizarre bits and bobs that I’m okay with including it. I’m not a fan of orange, but it’s definitely eye-catching with Miku’s teal hair. The tire base is pretty cool, and the umbrella is a nice touch, but what the fuck is with the living cartoon weights? What are those?? Why are they bringing Miku a Red Bull??? Why am I questioning the internal logic behind an anime waifu figure???? 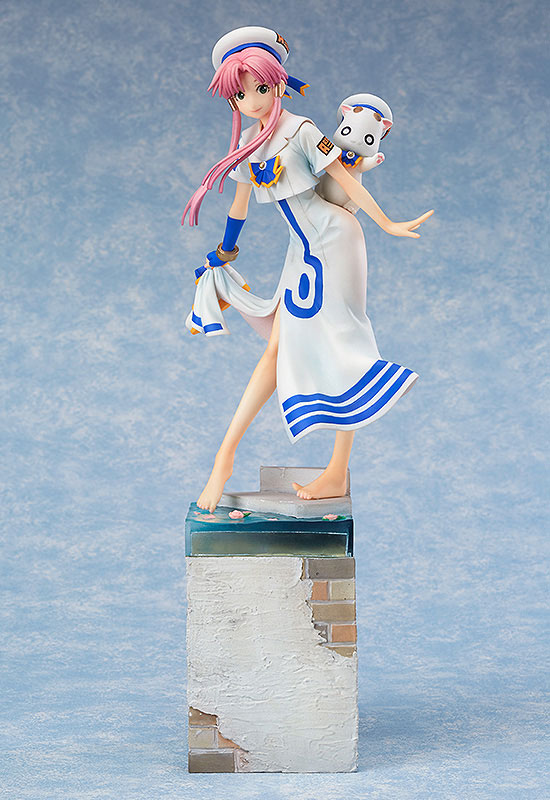 Zigg: This one is a little odd to me because I’m just not used to figures having this ratio of base to figure. It’s a neat idea though and it helps that it’s beautifully finished – check out the roughness of the paint over the exposed brickwork. I’m not against the lifted skirt in this situation either since it brings a lot more poise and shape to a figure that could potentially have dissolved into a mass of white dress. It’s an overall impressive effort from Wing, a company who look to be stepping it up recently.

Jel: I know nothing about Aria (aside from the cat in Amanchu) but I know a good figure when I see one and this looks pretty good. The sculpt and the pose are really appealing, as is the rather bizarre base. I understand the water bit but cutting that deep under it is very odd. Overall still looks great though, and it’s always good to see slightly older properties get some attention.

Iro: As the resident proponent of Aria, I’m gonna say that this looks really nice. Whoever made this must’ve really wanted to evoke the Venice vibe, since the brick-and-mortar base is so bizarrely extravagant that I can’t see any proper reason you’d include it. Also, that thing better be weighted, I feel like this would topple way too easily.

Zigg: This is an automatic recommendation because they got the most importqant part of Gary right, his insouciant smirk. That aside, Eevee is as cute as ever and the dramatic swoosh of the cape adds a lot of drama to something which might have otherwise been a little bland. The issue with this G.E.M. range remains though that you’re paying a lot and not getting an awfully large figure in return.

Jel: I barely know who this is but I know enough to want to punch him the face. Seriously, just look at this dork. Also who just leaves their Eevee un-evolved like that? I guess it looks ok as a figure, but I’d save my money for Kotobukiya’s growing (and superior) Pokemon line.

Iro: Did Gary’s Eevee ever evolve in the show? I don’t remember, so let’s look it up now… Huh, I guess it became an Umbreon. Either way, Eevee was the one that showed up with Gary in the OPs, since the show decided to play the long con and avoid telling us which of the three Kanto starters Gary picked right up until his climactic Pokemon battle with Ash at the end of the Johto saga. At any rate, this seems like a decent continuation of Megahouse’s nostalgia-baiting figures. Too bad Gary is an asshole.

Zigg: I’ll admit I’m kind of into the weird ‘cloth is going crazy everywhere’ vibe that they’ve got here, what with the flailing coat, the bundle of ribbons and the weird organic bodysuit top they’ve got going. I’m not entirely sure that that translates into unbuttoned hot pants and cut out thigh highs though. That aside this is another Saber and it’s difficult to recommend anything when Alter have a version available.

Jel: I really loved the Mysterious Heroine X original design for it’s simplicity and the fact that she was actually dressed decently and covered up. So sure enough, they go ahead and make a figure where she’s wearing some weird, complicated getup that is both skin tight and revealing. This is why we can’t have nice things.

Iro: Didn’t they just fucking make one of these in her regular clothes? Have we stooped so low that now we’re making multiple Fate/Grand Order figures of characters in their multiple states of undress? Throw in the fact that Mysterious Heroine X’s later forms are deliberate shout-outs to Sword Art Online and throw this figure into the fucking garbage bin. 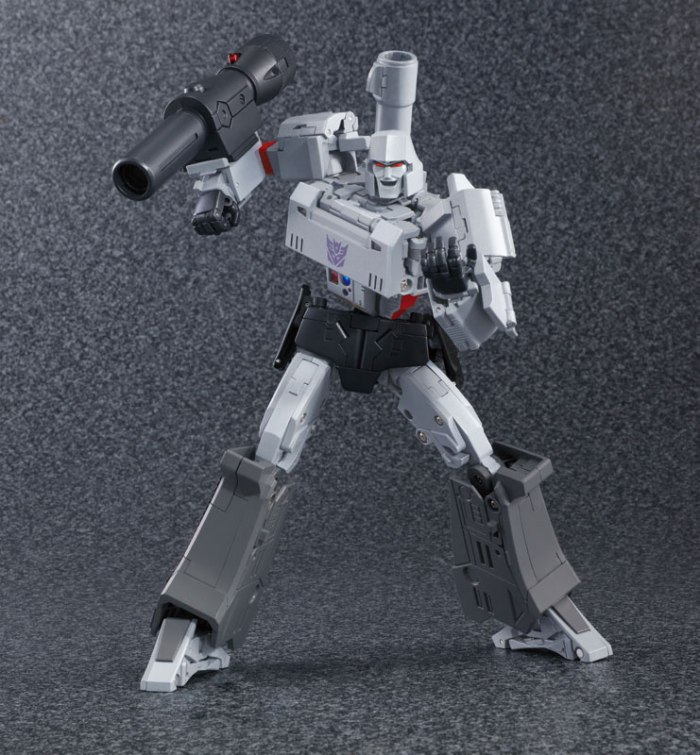 Zigg: I try not to dive too deep on Transformers in this feature because it’s an endless pit which you can never escape from, but come on, I’ll make an exception for my main man Megatron. Not only that, but it’s Megatron as you always wished he was, super cartoon accurate, fully posable and still totally transformable. These Masterpiece releases are like a dream come true for my inner child and boy don’t Tomy know it, since they’re priced accordingly. Still, a man can dream.

Jel: Man, Transformers sure have come a long way since I was a kid, way back in ancient times. Six year old me probably would have probably killed a fellow small child for this or any of the other Masterpiece versions I am now perusing. Ironically 2016 me actually has $200 but is cold and dead inside and doesn’t care about transforming robots nearly as much as I should.

Iro: That is a $200 Megatron what turns into a bizarrely realistic-looking pistol. Granted, I’ve only seen Transformers: The Movie, but I seem to remember Megatron’s gun form being way more cartoony. If I carried this thing around, I’d be gunned down by the cops.

Zigg: Incredible. On the technical side I’ll note how cool it is that they managed to get the streaky oil pain effect going on the figure itself, while most of me will just marvel about how silly these are and how much god damn fun they’re having with them.

Jel: This is the greatest figma of all time, right? Do we even need to have a discussion on it? These recreations of classic works of art are always impressive just on a technical level, but the silly alternate poses are just amazing. This is unquestionably my favorite and the first time I would actually consider buying one.

Iro: I fucking love these classic art figmas, and this might be the best one yet. I thought nothing would be funnier than the Vitruvian Man’s goofy running pose, but I was wrong. The Scream making hearts, double peace signs (PFFFF), and sexy poses is the greatest thing figmas have brought us to date. Can we go even further beyond?