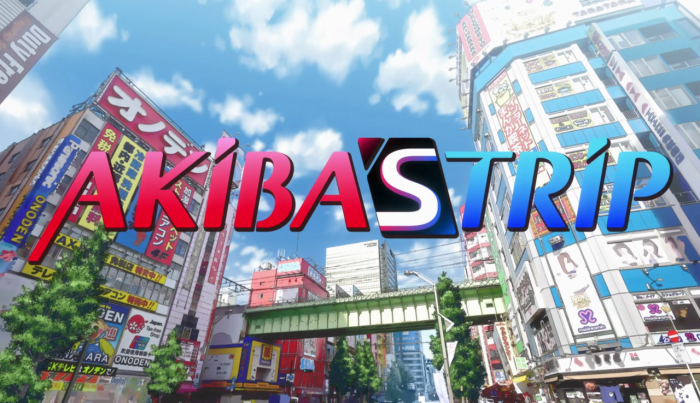 Akihabara has been beset by mysterious creatures who possess humans. Weak to direct exposure, they can only be defeated by removing the clothes of their host, even if said victim isn’t wearing much to begin with. I don’t fucking know man. Tamotsu Denkigai is your regular hapless NEET waste of space who suddenly finds himself drafted into the fight to save Akihabara.

Gee’s verdict: Flashes in the Pan

I guess the best thing I can say about Akiba’s Trip is that it isn’t completely terrible. The fighting action was genuinely well animated, and if it were the focus of the show, I could probably enjoy it as a mindless flashy romp. Unfortunately, everything else about the show is uninspired at best, and boring at worst. None of the characters are particularly interesting and while I don’t want to write off a show just because of its fanservice, the basic underlying premise of Akiba’s Trip just isn’t my cup of tea. Watching it reminded me of the underrated 2011 anime, Ben-To. But unlike Ben-To, which fully invested into its absurd premise, Akiba’s Trip waffles just a bit too much between uninspired otaku trash and flashy absurdist action comedy. Winter 2017 is a dire season though, and if you’re starved for something, you could do worse.

Iro’s verdict: Not The Worst, But Pretty Close

When Akiba’s Trip is about colorful, cartoony fighting, it’s actually pretty entertaining to watch. It’s just that the fighting invariably ends with womens’ clothes being torn off, and is sandwiched between some of the dullest otaku drivel put to screen. Keijo!!!!!!!! taught us that this type of shit is probably best played 100% straight and as seriously as possible, but this just doesn’t take it nearly far enough. Instead it kind of comes across as your standard sort of wish-fulfillment action show where the protagonist meets a cute girl and they go on cool adventures, which, I mean… on some level, that’s pretty inoffensive, I guess. Still, definitely not my thing.