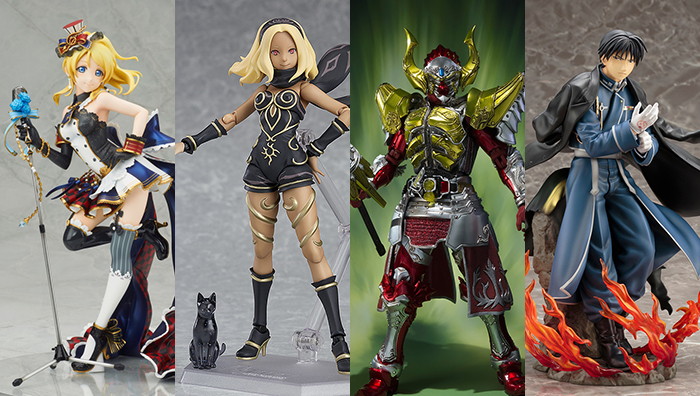 Hello, and welcome to All Your Monies, where The Glorio Blog’s resident toy and figure collecting crew (and Iro) will run down the last week’s new pre-orders, turning a loving or scathing all-seeing eye over what’s been put out for you to spend your hard-earned cash on. After an extended break due to the end of year wrap up and subsequent new season, AYM returns! 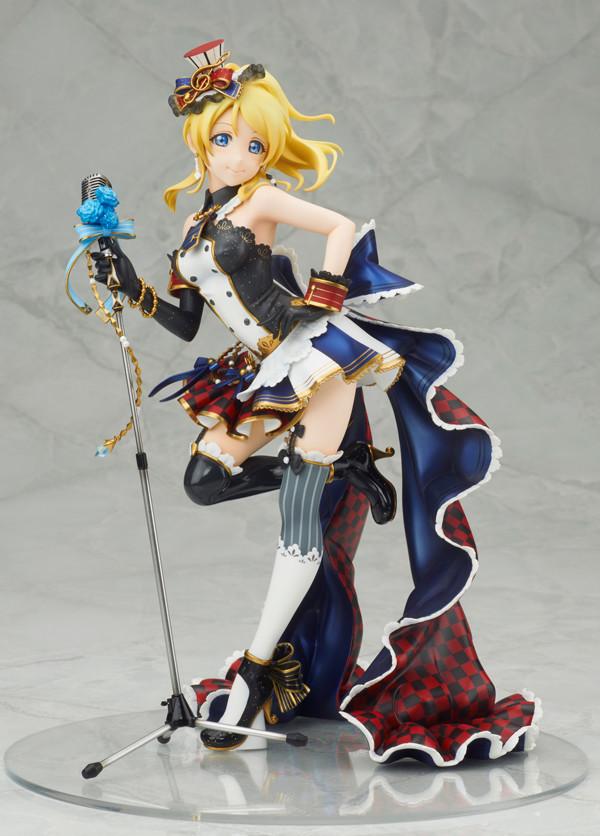 Zigg: I really, really want to stop featuring Love Live figures in this post but figure manufacturers keep stopping me from doing so by producing super amazing versions of them. This might be the finest yet, a superlative sculpt from Alter which is big, wonderfully garish and packed full of excruciating detail. Check out that amazing flowers on the mic stand, or that lovely treble clef hairpiece. I’m really digging the colour scheme too, varied and outstanding without being too flashy. The price is insane but then you already knew that right? Maybe a new high watermark for the franchise.

Jel: Oh hey, my Love Live alter ego has finally joined Alter’s crazy outfit line and she looks great! Sure those are some of the most garish, incomprehensible combinations of clothing and patterns that I’ve ever seen, but it’s so over the top that it kind of loops back around to working again. I love the dark red and blue splashes of color, the pose is great, and I appreciate that Eli is sculpted with body proportions that are nearly possible in reality. I mean, it’s still an idol figure and I could care less about Love Live but this sure is impressive to look at.

Iro: Alter still makes good stuff, although I can’t bring myself to hold an iota of interest for Love Live. This is an appropriately absurd, garish outfit for an idol, and it’s got plenty of nice detailing. If you’re one of the people super into this franchise, you could do worse. 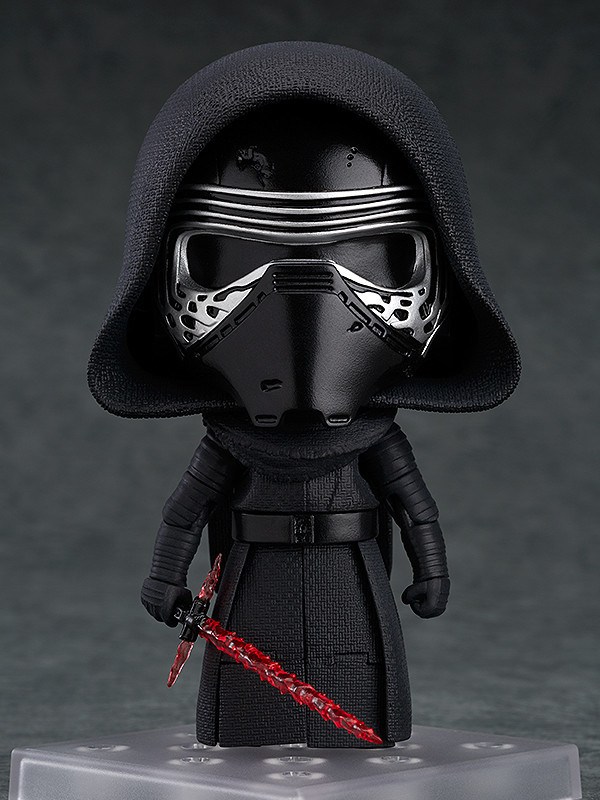 Zigg: The best Nendoroids are the ones which contrast the seriousness of the character with the absurdity of the concept, and there’s no one better for the treatment than living Creed album Kylo Ren. I really hope we get to see a photo of Adam Driver cradling this little guy.

Jel: I love the textured robes and the accessories are on point but let’s be honest, that cute unmasked face is the best part of this. While not quite as amazing as moe Tony Stark, it does help keep Kylo Ren in his place as temper-tantrum-throwing baby edgelord. I’m assuming that’s why you would buy this and not because you actually think Kylo Ren is cool, right?

Iro: Kylo Ren is a dumb little baby and therefore a perfect Nendoroid candidate. I’m not sure any other proportions would be appropriate for his baby-ness.

Zigg: Kat has a delightful design and I’m really pleased it’s made the leap to figma form again, but holy shit let’s talk about that price. I know it’s pretty much the point we always bring up when discussing modern figmas but at this point you’re paying more for this figure than the game she comes from and something is pretty off there.

Jel: Gravity Rush is one of those games I own but never actually played so I don’t have a lot of insight to offer here, but Kat does look pretty cool. Her gold and black outfit is probably about as classy as you get while still showing that much skin and it does a surprisingly good job of masking the articulation. And hey, she even comes with a cat! Now if we only didn’t have to be regularly reminded of how ridiculous figma prices are, we’d be all good.

Iro: Figmas are just getting more and more absurdly expensive, huh? It’s definitely too much for what seems like a pretty standard figure of Kat, whose outfit always skirted the line between acceptable and just a bit too skeevy. I suppose I can give it a pass since she’s basically a superhero, though. I just wish her little cat buddy had more than one pose. 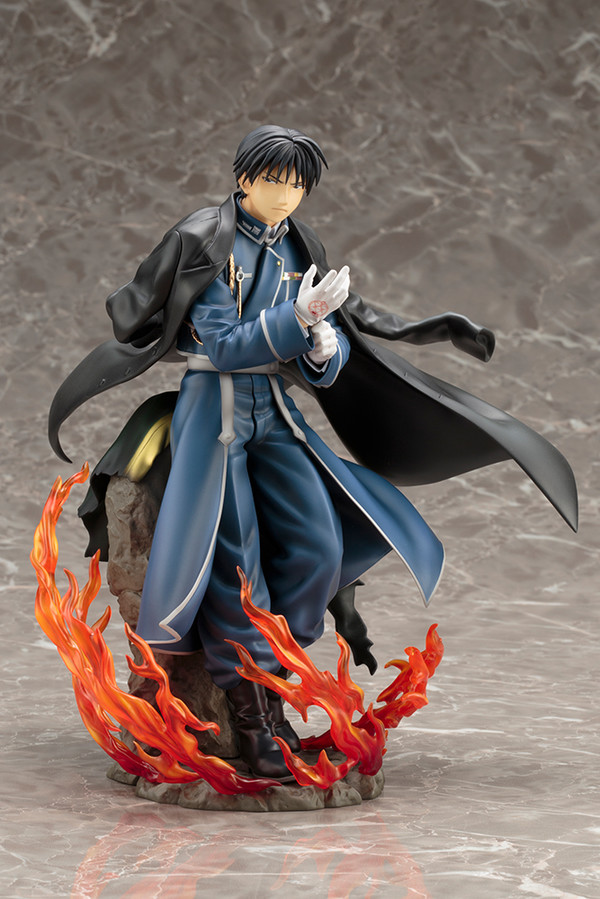 Zigg: Kotobukiya continue to do proud by older series with the ARTFX J line, with a figure which features some real nice cloth work, something of a rarity on male sculpts. The flame effects are pretty snazzy too. This doesn’t really strike the value chord that I’ve praised much of this line for but the result is still super solid so it’s tough to gripe.

Jel: Remember the days when it was a small miracle to see a male anime figure? There have been plenty of opportunities to bring this up but I feel like mentioning that it’s cool we get them now, and even cooler when we see characters that should have gotten the figure treatment during those dark times. It’s even more cool when the figure turns out to be good, as is the case here. I love the pose with the flowing overcoat and of course the base steals the show with those fire effects. Maybe that’s enough words to distract everyone from noticing I run an anime blog but have never watched Fullmetal Alchemist…

Iro: One day I’ll get Aquagaze and Zigg to watch this show, but for now we get a fancy figure of the fanbase’s favorite flamer. Mustang was all the rage back when I overheard people talking about FMA in high school, though I spent probably a full year thinking his name was Colonel Mustard, like from Clue. I was young and stupid. 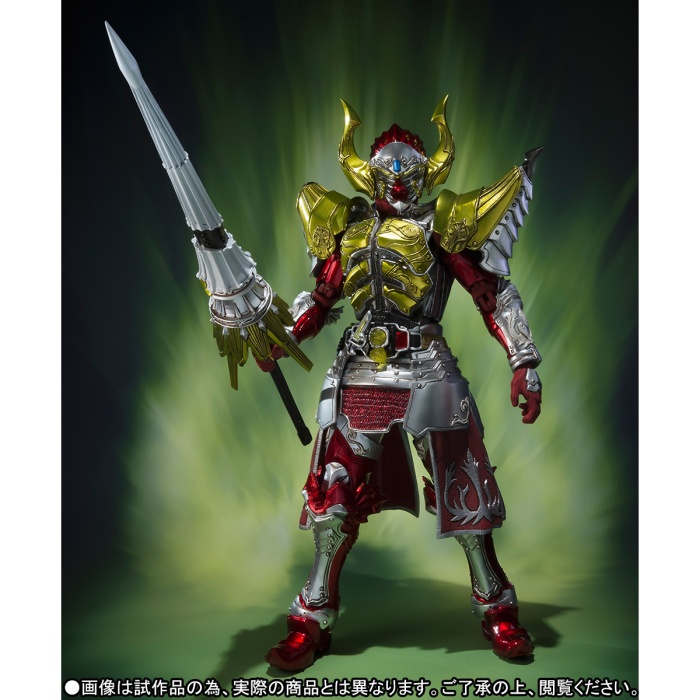 Zigg: Usually the SIC range turns up the gross mutant body horror factor, but given the Warring States theme which so pervades Gaim, choosing to accentuate the samurai-ish look is a pretty great call here, and the result is a Baron which look noticeably more flash and spectacular than usual, but doesn’t lose the original design aesthetic, an occasional problem with the line.

Iro: The standard Banana Arms was always Baron’s best-looking form, and the extra detailing on this to make it look like some actual form of armor instead of the usual tokusatsu plastic and rubber really just makes it look better. It even comes with an actual fucking spear version of the never-ever-used-as-a-spear Banana Spear! Wow!