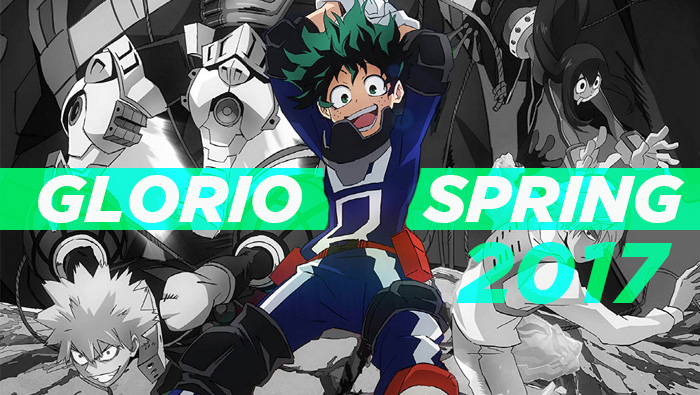 Another season is almost in the books and once again it’s time to look ahead at new shows. Spring is loaded with returning favorites, so many that I will actually post a list of the ones we are not planning to cover in part 3 of the guide. As for our first part, it’s headlined by the return of GLORIO favorite My Hero Academia. You can also join me in wondering if Akashic Records of Bastard Magic Instructor is the worst title of all time, for anything. Enjoy!

If you missed the first season, My Hero Academia is about a boy named Deku who desperately wants to be a hero despite not having a super power – something most kids these days are born with. Things change after he meets the world’s most famous hero, All Might, and he finds himself enrolled in hero school. The series is an interesting mix of coming of age shonen manga stories blended with a healthy does of western super hero comic book sensibility. More importantly though, the show’s got a lot of heart. Deku is the ultimate underdog and seeing him overcome his situation gives the audience plenty of reasons to get up and cheer. So if you’re looking for something to get you fired up each week, now’s a good time to catch up.

A group of girls with god like powers are being held captive for testing. One of the girls, named Alice of course, escapes and meets a grumpy old man named Zouroku. So, this might be good? I’ll be interested to see how serious they take the premise. Will it be a more intense type of show with Alice on the run, or will it be a laid back show in which she gets to enjoy the simple pleasures of normal everyday life and warm the old man’s cold, dead heart? I’m leaning toward the latter, and if that’s the case then I might be on board.

Kagami’s mother left him with an obi that he cherishes greatly, or at least he did until it turned into a cute girl. Apparently the sash has become a tsukumogami and now she is living in his house. It is now just like every other “magical girlfriend” anime we’ve been seeing for thirty years. Yawn. As an added bonus, the trailer also looks bad production wise, so yeah not getting my hopes up on this one.

Technically the first two episodes of Granblue were previewed on Crunchyroll about a month ago, so if you are legitimately interested in this you might as well go watch those. For anyone else, I have not watched them but here’s the general idea: this anime is based on one of Cygames’ many popular mobile games in which you collect a bunch of cute anime warrior characters. Unlike a lot of those games though, I think the art in Granblue is pretty classy and it looks like A-1 is using some of that Sword Art Online money to make sure this looks nice. Will it actually have a good plot though? I’m not getting my hopes too high on that. Instead, I’ll be sticking it out with that other show based on a Cygames game, but more on that later.

Years ago Konami made a toy line of cute armored robot girls called Busou Shinki and then made it into an anime. Kotobukiya is now doing the same thing. OK, if you want to get technical I believe Frame Arms are actual model kits that you put together, but it’s close enough. Based on the trailer it looks like the anime is at least not weirdly perverse like Busou Shinki was and is going more the Gundam Build Fighters route with actual building and fighting battles. I would set that as a bare minimum requirement for competency though and wow that CG in the trailer looks harsh, I’m still expecting this to be bad.

Alright everyone, get your light novel bingo cards ready because there’s a few of these this season. GLENN RADARS (yes, that is his name), is a slacker working as a substitute teacher at magic academy #78567521231. One of his students is a serious girl that gets fed up with his slacking off, so she challenges him to a magic fight and beats him soundly. That makes everyone thinks GLENN RADARS is bad at magic, but it turns out he just has his own special magic that can cancel everyone else’s magic. I’ve already wasted more words on this than I should have, you know the drill. This is going to be bad.

Personally a story in which sword toting girls rule over the boys at school sounds fine with me, but don’t get your hopes up. It’s actually a story about a boy who transfers in and tries to defeat them. I’m sure this isn’t meant to be some kind of metaphor for Male Rights activism or anything like that, but the concept kind of leaves a bad taste in my mouth. As a show targeted at the male demographic it feels like they’re saying, “you know what’s really holding us back guys? All these strong WOMEN. Let’s physically subdue them!” Ugh. Even at face value, I can’t get a read on whether this is supposed to be serious or not, so I guess we’ll have to wait and see where they go with it.

In yet another one of P.A. Works’ pastel-tinged shows about life in sleepy rural Japan, Sakura Quest gives us a glimpse into the exciting world of small town tourism. The story follows five girls as they work as ambassadors for the town’s tourism bureau. I’ve seen a lot of people hoping this will be the spiritual successor to Shirobako but I’m being a lot more cautious. It seems being a tourism ambassador has a lot more in common with being a local idol than an anime producer, and I’m guessing it will feel more like a hard working “idol show” premise with everyone ganbare-ing all over the place. Apologies for the lazy writing, you know what I mean. ANYWAY, that’s just my gut instinct, I’m willing to at least give it a chance.

FROM THE STUDIO THAT BROUGHT YOU JOJO’s BIZARRE ADVENTURE… a serious, emotional drama with light sci-fi elements??? Sure, why not. The premise involves a town in which many of the residents have a super power, including two students who use their abilities to help people out. Normally I’d roll my eyes at seeing more super powered high school students, but it looks like this is a much different context than usual. The trailer gives off more of a “real world” vibe, and the idea of exploring what actual humans and not anime characters would do with super powers can be interesting territory to explore. It also looks a bit dry to be honest, so hopefully the drama will be compelling enough to make this good.

Heine Wittgenstein is a tiny little man charged with tutoring the kingdom’s four hot princes. It’s a comedy. That’s all I got. I’m not saying that’s a bad thing, a good comedy doesn’t need much setup. It’s really going to come down to how well the humor is written and directed. I’d like to say I’m excited since I do love comedies, but I get the impression the primary goal of this show is to pump out more eye candy for the pretty anime boy seeking crowd. At least in that regard, the trailer looks very nice. Look at all those levels of shading! It’s like we’re back in the 90s!