The crank is turned on the office gacha machine, and out plops a small ball. Opening it up, we see two small slips of paper, each with a single printed word. The first of these slips says ‘music’. The second says ‘pretentious’. Challenge accepted, shouts Brain’s Base.

I only have one positive thing to say about my time watching Anonymous Noise, and it’s that it manages to be terrible without using boob jiggles, panty flashes, groping or worse. No, this is just a show that does a fantastic job during episode one in literally infuriating me with more or less everything else that it did.

The show opens to a girl on a beach, singing a song for approximately a minute longer than was necessary. At first it’s pretty inoffensive – you just assume that the ‘la la la-ing’ is just being used to show her age as she slowly grows up through time skips. But no, it keeps going, until we eventually see her in school, attending the performance of a school rock band. What we know about her up to this point is that she wears a face mask, she has an iPod nano and she once visited a beach. 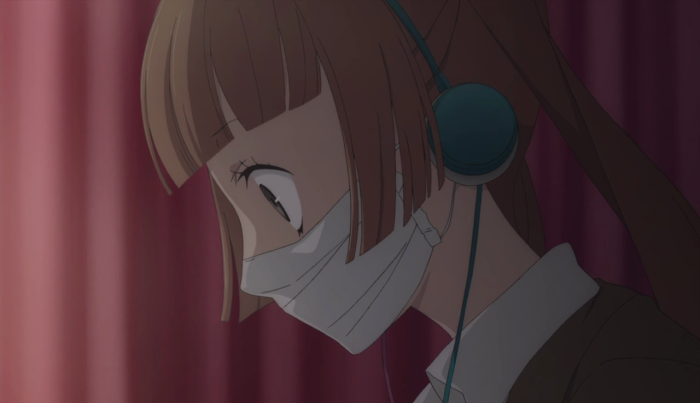 But drama! The song that the rock band performs resonates with the girl, causing her to remove her mask (thus unsealing her vocal power level) and belting out a song so loudly that honestly should have had her booted out of the hall she was in. But no, more drama! One of the guitarists hears it and recognises the girl, dropping his plectrum in shock. Further drama! He runs off for some reason, and is chased down by main girl. The rest of the rock band apparently seem okay with their gig breaking down because… reasons.

And this is the biggest reason why this anime sucks; it makes continuous assumptions that we are bought into this premise, these characters and their pasts, and instead of actually addressing any of this shit it doubles down on piling more and more stuff on top.

The lead singer of the band gets jealous and quits, being replaced by the girl that ruined their gig. There’s a sequence where beach girl and guitar guy have an impromptu jam session that you surely must feel MOVED and INSPIRED and BLOWN AWAY BY that they render the scenes in pastel colours and with the largest shoujo smiles you’ve ever seen. Beach girl also completely butchers a live song at the end, leaving the crowd… overjoyed? What?

Anonymous Noise is a spectacular show, but for all of the wrong reasons.

I didn’t even make it halfway through this premiere before wanting to throw my laptop across the room, and I finished the episode through sheer force of will (and/or stupidity) alone. Look, I get that the target audience for this is probably a decade and a half younger than me, but I also don’t think that’s any excuse for producing something as painfully hackneyed and poorly-written as this. Every single line of dialogue was so melodramatic that the whole thing could almost have been a parody of itself, and unfortunately for a couple of the characters, their angsty backstories didn’t serve as adequate justification for them being complete assholes. (I know, I know, that’s supposed to be sexy.) On top of this, the story kept jumping from one scene to another seemingly at random; in fact, the events of this first episode alone probably could have covered an entire season. Topping it all off was that god-awful singing and some truly eye-watering artwork, the latter of which looked like a reject project from the 90s. I’m really not getting paid enough for this.