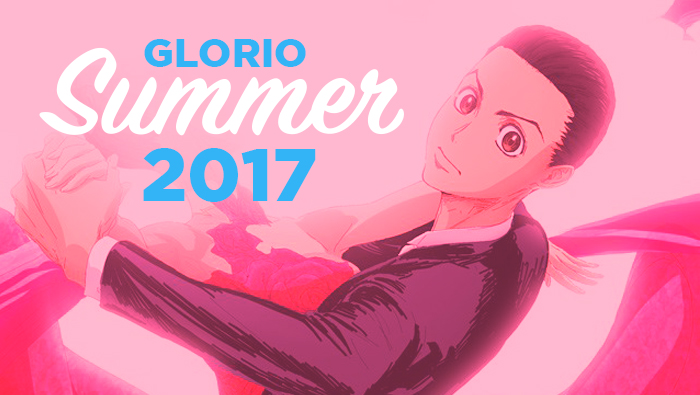 Part 2 of our guide features the Gee-Man approved™ Welcome to the Ballroom, filling that need for hot blooded ballroom dancing you didn’t know you had. There’s also a few interesting shows like the bizarre looking 18if that have potential but also a lot to prove if we’re just going by the trailer. Finally, we have to ask can MAPPA survive doing THREE shows in one season? Personally I don’t care so long as the continuing Rage of Bahamut: Virgin Soul stays good. What’s everyone else watching?

You can read Part 1 of the guide here.

The conspiracy theorist in me raises an eyebrow at reviving a ten year old manga that looks suspiciously like recent smash hit Free!!, right down to the exclamation point. On closer inspection it might actually be closer to Yuri!! On Ice as the story focuses on a real diving club aiming to send a member to the Olympics. Just maybe with less kissing and marriage proposals and what not. Maybe. It looks like it could be pretty good if you’re looking for another show about ripped dudes talking about their feelings, so if that applies keep your eyes on this one.

Six students go about the various ups and downs of school life and the one thing tying them together is… a convenience store? I was almost certain this was some kind of marketing ploy by Lawson or something but it doesn’t seem to be tied to anything. So I actually think it’s an interesting story telling angle. I mean what’s more grounded, even comforting, than your corner store? It’s always there for you no matter how bad things get. Konbini-kun, I love you!!! ….OK that got weird, but this seems like it’s worth a look at least.

This is basically an idol show except instead of singing and dancing the girls are putting on low budget stage shows and competing to be Japan’s top action heroine? I mean I have to admit that sounds like it could be pretty great on paper, but the trailer does not instill much confidence. If it wasn’t for the quick stunt in the beginning I would think it was just any other idol show with its deep roster of generically cute anime girls. I’m guessing it will be pleasant and inoffensive but probably not worth the time.

A young girl dreams of being a Cave Raider – treasures hunters who explore the mysterious “abyss” looking for valuable relics from the past. She finds a robot boy who joins her adventures. That actually sounds pretty good, I was pretty much on board until I saw the art. Look, I’m all for super stylized approaches but I’m not sure about this one. If the show is good it might win me over, but that is one extra hurdle we’ll have to get around.

Here it is folks, your total wild card of the season. 18if is about a boy who wakes up in a weird dream world and discovers the existence of witches. That’s about all we have to work with at the moment as the trailer certainly doesn’t tell us anything. I’m totally cool with that part of it, as I love when anime uses surreal storytelling. I’m more concerned about some of the awful animation. I mean, your trailer is supposed to show your show at its best and this is what you give us? A regular high school show can get away with that but I fear 18if’s production will not be able to live up to its ambition. At least they got Teddyloid for the OP, so that’s cool.

I always find it interesting how Japan sees Christianity as something exotic in a similar way we are fascinated with aspects of their culture. In anime that usually means names referencing Biblical characters or events a la Evangelion or some bizarre alternate version of the church like in A Certain Magical Index. It’s actually quite rare to see a direct depiction, but that seems to be what we’re getting with Vatican Miracle Examiner. The title pretty much says it all as its about a pair of investigators who travel the globe verifying miracles. It still looks very “anime” so maybe the fact that they are literally working for the Vatican won’t make much different in the long run. At the very least that’s all enough to pique my interest, we’ll have to see what direction they go with it.

The “Chronos Rulers” are a group dedicated to fighting time demons who appear when someone wishes to turn back time. I get the impression the plot is not really important, just watch the trailer and you’ll agree this might be the most “anime” looking show of the season. It certainly is going for style, right down to the jazzy soundtrack, so maybe this could be a fun diversion if you’re looking for a dumb anime action show. Personally I just find it hilarious that the main trio (presumably siblings?) all have the family name “Putin”, as if the writers needed a Russian name and that was literally the only one they knew. I’d rather not watch a show where someone named Putin is the hero though, so that might be strike one already.

Welcome to the Ballroom

Imagine a hot blooded shonen manga, but instead of the underdog protagonist taking up martial arts or traditional sports he dives into the world of competitive ballroom dancing. Sounds pretty good, right? That and a strong recommendation from our own Gee-man who liked the manga is enough to have us excited about this one. The trailer looks promising with some pretty solid animation and I like the unique art style. Now if I can only stop singing the title to the tune of “Welcome to the Jungle” we’ll be all set.

Altair: A Record of Battles

Political intrigue abounds in the empire of Turkiye – which looks suspiciously like the Ottoman empire aka Turkey – as a young ruler struggles to avoid war with a neighboring empire. I’m getting some real Heroic Legend of Arslan vibes here in that I can appreciate the unique setting but my gut instinct is that it will be a bit dry and boring. Think history documentary expect the history isn’t real. The trailer does look very ambitious and well made but even that has me concerned. MAPPA does great work but this is the third show they are doing this season behind Kakegurui and the continuing Rage of Bahamut: Virgin Soul. I’m rooting for them, but I imagine something will have to give eventually.ds