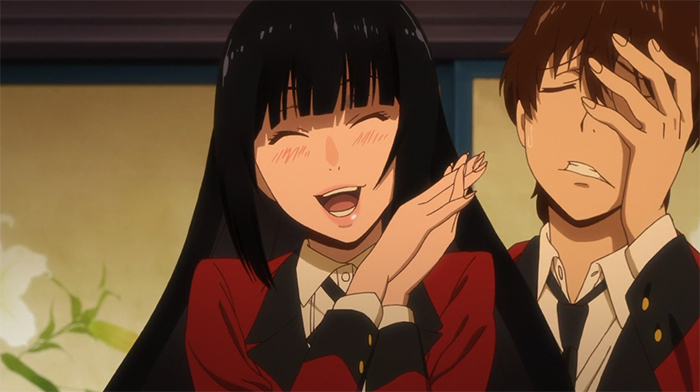 With first episodes spanning over three weeks, we’re a bit late firing up the Roundup this season. But hey, we’re here now to talk about Welcome to the Ballroom, Restaurant to Another World, Fastest Finger First, and Kakegurui, plus catchup with Sakura Quest and Rage of Bahamut: Virgin Soul. Let’s do this!

Jel: Bahamut is kind of like family now in that I feel obligated to love it unconditionally no matter how much it drives me crazy. So here we are, toughing out another season.

In theory the adventures of Nina and Jeanne should be good and yet so far this plot line has felt kind of empty. If they had planned on making Mugaro so important to the plot, it makes me wonder if they should have focused on Jeanne from the start. The strength of a mother is a fascinating theme that generally goes under explored without killing her off to motivate the hero, so I would have been cool with that being the main story line. Sadly, I don’t think that angle has received the development it needs and the big reunion this week didn’t really have the huge impact they were intending. Basically what I’m trying to say is… bring back Favaro.

One final note, how is the new OP so bad when the new ED is so, so good?

Gee: I have to admit I had forgotten how conventional Ballroom starts out. Were it not for some surprisingly excellent imagery and animation work from the outsourced Studio DEEN (RIP Kazunori Mizuno) of all places, it would be entirely reasonable to think that it’s your bog standard sports anime. It’s got your timid protagonist with boundless potential, inspiring heroine who’s the object of the protagonist’s affection, the seemingly perfect rival, the gregarious senpai, hell it even has the two joke characters who act as exposition devices. Still, the quality of its strengths shine through even now, primarily through the show’s excellent visuals. There are some Ping Pong-esque moments at play which are the standout scenes. I have some knowledge of later events so I’ll just say that Ballroom definitely plays with those tropes in interesting and unexpected ways that I’m looking forward to.

Jel: ​​​​It’s probably going to be a challenge to write about this show every week as very little actually happens, but it’s such a pleasant experience I feel the need to keep everyone up on it. I’m really liking the format of small little vignettes that teach us about the other world and the history of Nagoya without beating us over the head with it… well, there are still some talky parts but for the most part we’re left to put the pieces together for ourselves. Most of all though, in these dark times, it’s nice to watch a drama free show full of people enjoying themselves. I kind of hope it just stays that way and avoids any messy, over-arching plot. Now if I can just remember to eat before I watch, this show has definitely been making me hungry.

Marlin: I was getting a huge Chihayafuru feeling from this show already, but this week it literally spells it out for us: The hook for the competitive parts of this show is the mind games and reflex abilities that are necessary for winning. Koshiyama can have all the smarts in the world, but he quickly learns that he also has to think into the logic of the question structures and be predictive. It makes for a fun and fascinating bit of television, if only for those like me who are obsessed with trivia. I do hope we see a bit more development with these characters as the club starts to settle in. I feel like Chihayafuru really didn’t get into its stride until we went deeper into the passions that drove its main players. Predictably, we’ve already established the main rivalry, and for once it’s someone who is actually pretty approachable. He’s incredibly competitive, but his earnest comes through from his skill and the respect he shows Koshiyama at the end. Everything is set up for this to be a comfortably fun show, here’s to hoping that continues.

Jel: ​​​​While we’ve been raging at all the bad new shows, Sakura Quest has quietly continued to be the best thing going. At the current rate of things, it might still end up being the best show this season. I loved the summer break episodes which gave us a chance to see how everyone has grown since the beginning. I’m also loving the current arc. I’m a sucker for flashbacks involving rock bands and, hey, now we truly know why the show is called “Sakura Quest”! I’m assuming the final episodes will be broken up into the hunt for the three treasures and I’m really looking forward to seeing what small town problems those quests will amount to. 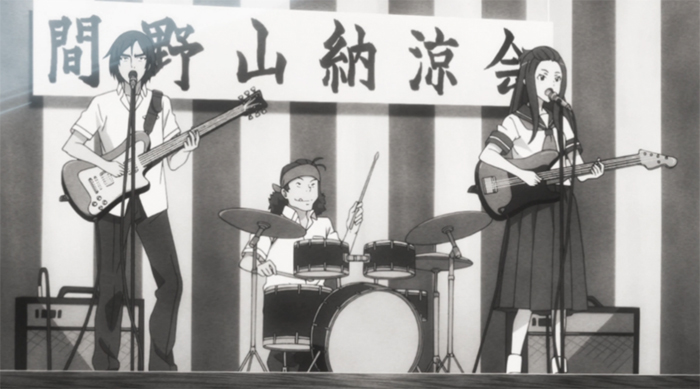 Sakura Quest – I want to watch this anime

Jel: I’m loving Kakegurui’s creepy atmosphere and stylish depravity. Yumeko also makes a very compelling protagonist, if you want to call her that. I guess she’s the closet thing we have to a “hero” in this show, but you certainly don’t get main characters this shamelessly insane every day. My only concern is that these first three episodes have basically been the same. Yumeko losing in episode 3 was a twist, but considering how unconcerned she was with her punishment it all felt the same. I’d like to see her team up with Saotome and go on the offensive but she’s so chaotic that it’s hard to see that happening. Kakegurui has still got me hooked with presentation alone, but that will only last so long. Hopefully we’ll get something fresh next week.