Streaming in November on Netflix

As Ruler makes her way to Trifas, one of Yggmillennia’s homunculi escapes confinement.

Apocrypha is already showing the major downside to ballooning the number of characters: none of them get anything approaching development. Of the six Yggmillennia masters, Glasses (Female) is a sex-offender, Chufty is a pompous buffoon, Glasses (Male) is a shy nerd, Wheels is generically tragic (MY LEGS THAT SOMEHOW CANNOT BE HEALED WITH MAGIC BECAUSE I SAY THEY CAN’T BOO HOOOOOOOOO), Boss is a Nazi, and Shota is practically a non-entity. The Servants only fare better because they call to mind the existing stories behind them, but the show itself merely pays lip service more often than not. Back to Masters, the Red Faction crew show up for a scene, but considering none of them says a word or moves an inch and the room is filled with sketchy incense, I’m confident in saying they’ll continue to have no meaningful impact on the show. 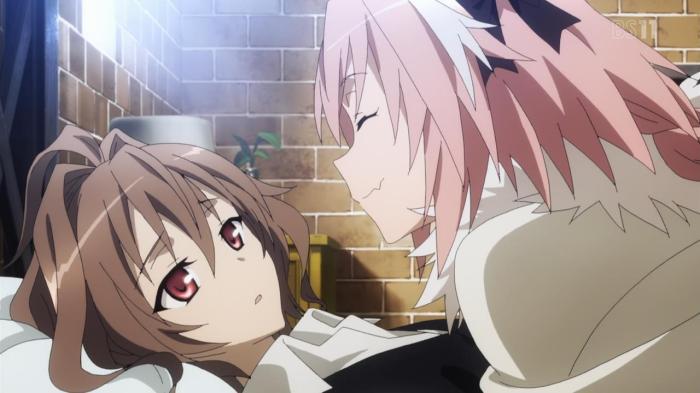 And thus lacking any characters worth rooting for, one of the homunculi escapes from his evil test tube and is rescued by Astolfo (whose personality boils down to “peppy shota”), and then is informed that as a homunculus (read: generic mook), he only has three years left to live. So again, generically tragic. He’s actually one of the few characters whose plot involvement I’m somewhat aware of, so I hesitate to say too much more, but it definitely feels like Mystery Homunculus is going to be one of the major protagonists alongside the Saber-R team and Jeanne D’arc.

Speaking of Jeanne, she makes her first proper appearance as Ruler this week, playing up her role as a neutral third party. That’s about all she does though, and the fight instead becomes Karna vs Siegfried. There’s some decent enough animation on display, but naturally things are cut short as the sun rises. The show doesn’t really explain why that’s a big deal, but the oft-ignored “rules” of the Grail War state that it’s only held at night, away from the prying eyes of bystanders. Like all Fate works, Apocrypha only feels like following the rules the franchise has set out when it’s dramatically appropriate. Even then, it’s still some prime anime bullshit.