Streaming in November on Netflix

The Great Holy Grail War continues, and the machinations of the Red Faction come to light.

What happened to regular coverage, you ask? The trials of normal life answer that one; normally I wouldn’t bother trying to catch up, but I need to keep my Fate street cred somehow, right? Now that we’re a cool halfway through Apocrypha, I think it’s time to do some recap/roundup and maybe talk about the the franchise in general for a bit.

Let’s try to sum up the major events, shall we? We’ve been shown thus far that Apocrypha is an alternate timeline to the mainline Fate universe(s), where the Einzberns summoned a Ruler-class Servant – Amakusa Shiro – as part of their gambit to finally win the 3rd Fuyuki Grail War. However, Darnic Yggdmillennia and his Servant Lancer, with backing from the Nazis, ripped the entire Grail War system out of Japan and took it back to Romania. He used its power to reincarnate in the hopes of holding another Holy Grail War and using it for the purpose of accessing the Akashic Records. Why didn’t he do that in the first place, you ask? That’s a good question. Moving on.

60-ish years later, Darnic gathers 6 other magi to act as Masters in a farce of a Grail War, which triggers a heretofore unknown defense mechanism in the Grail that chooses another 7 Masters to summon another 7 Servants so there can be team-based multiplayer. Shiro, having survived, took advantage of this to take control of the new Red Faction and bring his mysterious plans to fruition, leaving us on Episode 12’s cliffhanger. 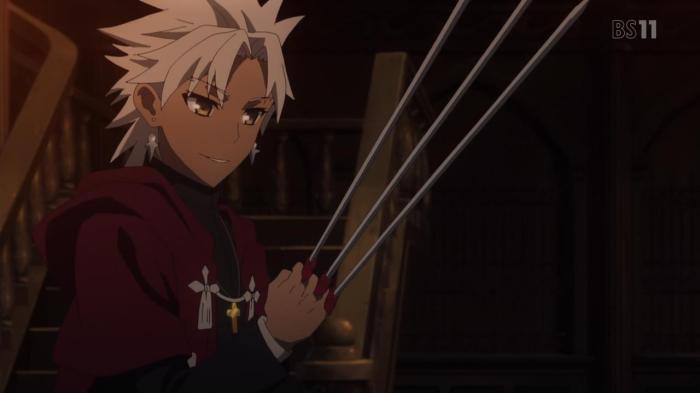 The rest of the Servants have been dutifully battling it out for the most part, though the casualties are pretty slim for being halfway through the show. Both side’s Berserkers are down (assuming Spartacus’s beam cannon was a final attack); Vlad’s presumably down for the count after being char-broiled with holy flame; and Saber of Black is dead-but-not-really, living on in some form through homunculus Sieg… somehow. The show is never clear on how that works, the excuse being a combination of the Servant contract involving Sieg as a living battery and some plain ol’ “haha, magic I guess?” bullshittery, which is so completely Fate that it’s practically a joke.

The franchise has a nasty habit of setting up systems of rules only to ignore them for shock value, and Apocrypha is especially egregious, taking exceptions from mainline Fate entries and making them into the new standard. Take, for instance, Semiramis summoning an army of skeletal “dragon tooth” warriors, just like Caster did in Fate/Stay Night. Ignoring the fact that she’s an Assassin class Servant and thus shouldn’t be able to summon mooks (which, naturally, they write off by saying she has a special skill that allows her to be summoned under Assassin and Caster simultaneously), why the dragon tooth skeletons? F/SN‘s Caster was Medea, daughter of Aeetes, the King of Colchis who provided Jason with the dragon’s teeth which sowed the spartoi warriors. In the film Jason and the Argonauts, Aeetes sows the teeth himself and they famously sprout up as skeletons (animated by special effects pioneer Ray Harryhausen). Original Fate describes this as a giveaway to Caster’s true identity, as it’s a skill unique to Colchis.

So, why can Semiramis summon dragon tooth warriors? Well, because she’s Assassin-Who-Has-Caster-Like-Abilities. “Caster did it before, so why not now?” posits Apocrypha. The Black Faction’s Servants are powered not by their Masters, but by homunculi. Why? Because Kayneth and Sola-Ui did that in Fate/Zero. Never mind that this was a borderline rule violation only possible because of Kayneth’s expertise with summoning and necromancy; Fate did it before, so now it’s fair game. How did Ruler (Shiro) stay alive after the a Holy Grail War and wait it out until the next one? That’s a good question, but wasn’t it cool how Gilgamesh did that in F/SN? Let’s just do that again, it’ll be fine.

All of this on top of Fate‘s usual complexity addiction. Vlad gleefully espouses that his Noble Phantasm isn’t the stakes upon which he impales his enemies, but rather the very concept of enemies being impaled upon his land. Achilles’ famous invulnerability save for his heel is described as some sort of bizarre “divine protection” that’s only able to be pierced by Divinity “of an equal rank”. Hell, just two paragraphs ago I had to explain that Semiramis is considered both an Assassin and a Caster. Come the fuck on.

I’d be willing to write off a lot of this if the cast had any bite to it whatsoever. Who am I supposed to be cheering for in this scenario? The Black Faction’s a bunch of flat characters who willingly signed on with a Nazi, and no amount of Glasses (Male) crying over his exploded waifu is going to change the fact that Nazis are all shithogs. The Red Faction is nonexistent other than Shiro, who’s been presented as a visionary villain who’s at the very least doing a bunch of shitty things for “the greater good”, so he’s out. Jeanne and Sieg are generically good and noble so I assume I should consider them the main protagonists, but they’re so utterly devoid of any interesting traits that I can’t bring myself to care. The only people in the show approaching having any personality are the Kairi and Mordred pair, but even the Grumpy-Dad-and-Snarky-Tween comedy routine gets old after a while.

And so, entering the second half of the show, I ask myself every week why I’m bothering other than out of some obligation to the franchise as a whole and the sick surge of endorphins any time it references something else in the verse. See you next time!