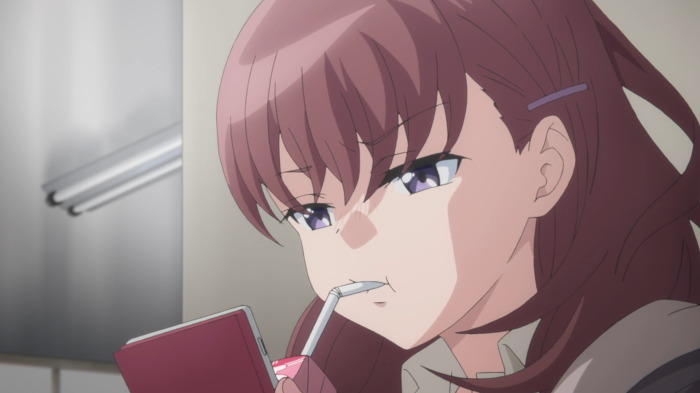 At the start of the final semester of his second year, Eita returns to his hometown after a four year absence and reunites with his childhood friend Haruto. Meanwhile, their classmates have concerns of their own — ranging from clubs risking disbanding to unrequited loves.

Aqua’s verdict: Why Not?

You know those people who won’t shut up about what a bummer it is Kyoto Animation is allegedly wasting all of its talent and recourses on making the same show over and over again? I can’t imagine how pissed these people are about other studios now trying their hand at this whole semi-idealized, semi-realistic dramedy thing. For some reason, shows about approximately three different flavours of nothing whatsoever are getting back into fashion, expect this time around they’re drenched in coming-of-age melancholy and awkward romance rather than saccharine pastels and whatever the paedophile equivalent of a dog whistle is. After the serviceable and (mostly) heartwarming Tsuki ga Kirei, Just Because! is next on the contenders’ list… and it’s a collaboration between the author of The Pet Girl of Sakurasou and the mangaka behind these skeevy Tawawa on Monday shorts that got kicked off YouTube. What could possibly go wrong? As it turns out… not a fat lot?

Contrary to what the exclamation mark in its title may suggest, Just Because is a slow burn, an almost documentary-style reflection on the end of youth almost unique in its complete neglect to colour its own lens. There are no real jokes here, no patent grasps at the heartstrings or even brooding navel-gazing here — no attempts at any overt emotional manipulation. Teenage listlessness is delivered at its very purest here, and surprisingly, this makes for some highly engrossing viewing. As anime generally continues to beat viewers over the head with its morals, it’s refreshing to get to be the master of my own feelings, and see, for example, the reunion between childhood friends who broke to keep their promise to say in contact after one of them moves away for the nuanced experience it really is.

It helps that Just Because! is — at least, so far — a sight to behold. Despite being a directorial debut with a mostly inexperienced cast, it boasts a wide array of lovely little touches that bring its otherwise rather plain looking world to live. Fledgling studio Pine Jam is not afraid to sacrifice detailed visuals for detailed animation, leading to an appropriately rough-looking but lifelike show. Turns out our “rookie” director is actually a protege of Tsutomu Mizushima, the director of Shirobako, so it’s no surprise he manages to juggle the relatable issues of Just Because!‘s extensive cast so excellently. What he’s still missing, however, is a strong hook. Will Just Because! find itself stuck in tired love triangles? Or will it live up to the potential I see in it, and try to tackle some edgier subjects? If anything this question has given me a better reason to keep watching than “just because”.

Is it weird that this reminded me of Seiren? Not that they have anything really in common, but while Seiren achieved a sort of bizarre sense of realism via the inanity of the dialogue, Just Because! manages it through the sense of listlessness that comes with growing up. Granted, it’s far too early to call if this’ll be any good; even for a guy with a short attention span like me, jumping around between every main protagonist left me just a tad lost. We’ll definitely need a bit more time to get to know the characters and their inevitably-juicy interpersonal relationships. And – if nothing else – this show seems like it’ll be something nice and low-energy to decompress with. I’ll stick with it for at least a couple more episodes.

This reminded me a lot of Tsuki ga Kirei even before all the Line messages started popping up. I mean that mostly in a good way – while that particular title may have left a bad taste in my mouth at certain moments, Just Because! has a very similar vibe about it. That very unexaggerated and down-to-earth delivery, the deliberate pacing, the way the silence is allowed to just speak for itself sometimes. This is exactly the kind of “hardcore slice-of-life” title I can really get into, not because it’s necessarily exciting or unique, but because it feels real and genuine and natural. Of course, as yet we have no idea how the romantic aspects of Just Because! are going to play out, and admittedly the show also looks a bit rough around the edges in terms of the visuals. That said, I never went into it looking for perfect – in fact, I’d say my expectations were pretty low. So while I’m hesitant to fully commit right off the bat, I’d consider myself cautiously optimistic.

One thought on “First Look: Just Because!”