This is #HATEWATCH. Even though in Eromanga Sensei we had a scene where a character had his pants taken off, at least he recognized the whole situation as wrong. Here, we see Teen Sex Criminal (I will not bother to remember his name any longer) literally sexually assault someone and get away with just a “man what are you doing you weirdo?”. As if what he did wasn’t a traumatizing crime. Chihiro has been the best character by virtue of her just not having any scenes worth mentioning, but now we see the male author writing her as being willingly silent in the face of this crime. It was so disgusting that I can’t imagine how it can get any worse from here. My only horror is knowing that every time I’ve said that, this show has managed to prove me wrong.

Later on in the show, we get the most undeserved dramatic moment in the history of anime. We’re supposed to believe that these people, who it would seem have known Itsuki for at least one to two years, somehow did not know something as critical about his life as his mom being dead. We’re supposed to take this as a shocking thing that makes Itsuki a deeper character, but from everything we’ve seen this still doesn’t excuse his rotten behavior. The whole situation is laughably trite and this writer should be embarrassed to think for a second that this episode had anything close to meaningful content.

The only bright spot in this black hole of decency was Haruto getting absolutely destroyed online while he watched the anime based off of his unoriginal hack job get the quality that it deserved. If we’re supposed to believe there’s anything redeemable about Haruto’s longing for generic story lines, why doesn’t this author actually write one? We both know that the reason they’re trash is not that they contain the simplicity of the hero’s journey, it’s that the hero’s journey has been so corrupted by Otaku culture that it’s become unpalatable. I mean, just look back to last episode at the cover art for his latest volume and try and tell me that fetishized monstrosity contains any of the qualities Haruto was talking about in his sad little monologue. 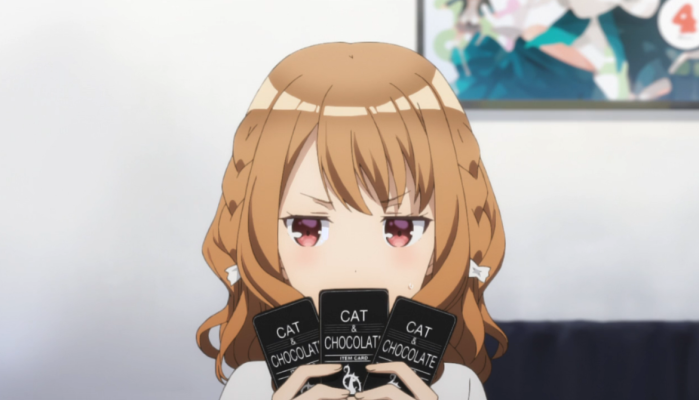 I sincerely hope none of these companies actually knew what they were getting into when they got advertisement on this show.

Aristotle states that there are some people who seem incapable of following ethical guidance merely because it is a good thing. Some need to be threatened by the law in order to act rightly. While, initially, their actions will be coerced and not truly ethical choices, habituating themselves to virtue can allow them to eventually genuinely desire the virtue. Teen Sex Criminal seems to be the kind of person that had no ethics instilled into him as a child, and thus has repeatedly been seen as a vicious wretch. After this episode, he should be put in prison to realize why you can’t assault women in the street.

I have zero tolerance for sexual assault jokes (as we all should) but I’m particularly sensitive about it in our current news cycle. So the bit with Chihiro getting attacked really set me off. Not only did it happen, when they casually alluded to it later by warning her to watch out for “weirdos” walking home, she decided it was best to keep quiet about what happened. HEY LOOK EVERYONE, ISN’T RAPE CULTURE FUNNY??? Aside from trying to make a joke, I guess this was their way of trying to hint that she’s really a girl. Yes, by having her pants forcibly removed by a person she doesn’t know on the street and showing that she has some lacy frills on her underwear, that’s how they want to break it to us. Disgusting.

That made me so sick that I’m not sure I even want to write about the rest of the episode or even continuing #HATEWATCH in general, but I guess I’ll throw in one more point. Another thread that might be interesting if the author had any kind of competency is using Miyako as an outside observer. She could be used as a mirror to provide perspective, to remind everyone that the little world of light novels they’re so absorbed in is not that important in the grand scheme of things. Instead she’s being used as a proxy to invite the audience to sympathize with the “struggles” LN authors have to go through, like they are some secret heroes that don’t get enough credit. So yeah, consider that another wasted opportunity, just like everything else in this show.