Our very GLORIO 2017 is coming to a close and it’s time again to list our best shows of the year. We’ve polled the GLORIO crew for their favorite series and using our scientifically proven weighted scoring system, we have created the list below. Did your favorite shows make the cut? What did we choose for #1 and why is it Eromanga-sensei? Read on!

Jel: We’ve had ties in our Top 10 before but nothing quite like this. So maybe you can consider our number 10 spot as something like an “honorable mention” section of shows on the bubble that are still worth checking out. Two of the shows, the dependable supernatural slice of life Natsume’s Book of Friends and the, uh, dependable supernatural comedy/drama The Eccentric Family have never quite got their due around here, so shout out to them. The third series is the less dependable Classicaloid which would probably have ranked higher if our opinion wasn’t soured by the lackluster second season. I still think season 1 is worth watching so if you like dumb, colorful comedies directed by Yoichi Fujita, go check that out as well.

Gee: Blood Blockade Battlefront blindsided us back in 2015 when Bones and Rie Matsumoto brought Yasuhiro Nightow’s latest manga to the screens. BBB&B is in some ways, both a more faithful adaptation and also a de-escalation of what the first season achieved. At its core, Blood Blockade Battlefront had always been a more episodic thing, detailing the lives of its highly likeable cast. With BBB&B, we got more of those great little moments from the manga, such as Chain’s apartment or KK’s trials and tribulations as a working mom. In exchange, this season had a lot less tension and barely anything resembling an overarching narrative. It’s a testament then, to how much we all enjoyed its characters and the setting of Hellsalem’s Lot, that even when the world wasn’t on the brink of destruction, we enjoyed the ride all the same. Hell, even when the world was on the brink of destruction, it never mattered as much as if Leonardo was going to get his wallet back.

Marlin: This was the latest in newly-formed studio Pine Jam’s attempts to make engaging original anime on the budget of a mid-priced 4k TV. Despite the multiple production glitches, the studio never let quality dip as it occasionally did in their first project GAMERS. Instead, Just Because! uses the beautifully muted color pallet and modest character designs that could only work during winter to convey a story of teenagers who are struggling to figure out where they belong. Its characters are incredibly human, having their own desires, but also reaching out and looking after one another. The metaphor of winter thawing into spring, the revival of what was thought dead, is not lost on these teenagers as they realize the coming of adulthood demands a change, but not an abandonment of what made them happy. Ultimately, what they all realize is that they need each other, whether that be romantically or platonically. In turn, they pass on this lesson to their younger friends, and the cycle of maturity continues once more.

Recovery of an MMO Junkie

Jel: Do high school anime rom coms making you feel old? Do you fantasize about quitting your job to play video games all day? Does the prospect of watching adorable nerds be nice to each other and fall in love sound appealing? If you answer yes to any of these questions you will probably enjoy Recovery of an MMO Junkie. It’s light and fluffy escapism in a mostly healthy way, touching on the quirks of online relationships while also delivering a satisfying love story. It’s certainly not the deepest series out there, but I found it to be incredibly relatable and refreshing to watch.

Iro: Listen here, I’m all for breaking established traditions, but even I – who had not watched Pokémon regularly in a decade – felt the rage bubbling up when they announced Sun & Moon, where ol’ pal Ash Ketchum would attend school, the bane of any ten-year-old. What about the adventure, the vaunted Pokémon journey? Was he going to sit in the back corner by the window, gazing wistfully outdoors where the series belonged? But this is still Pokémon, childlike sense of fun and wonder not just fully intact, but revitalized. There’s an understanding in this new series that experiencing the world doesn’t always mean seeing what’s over the next hill. You can just spend time with your friends, seeing what they have to teach and learning alongside them, in school or out. And 20 years after it first began, against all odds, I find myself enjoying Pokémon just as much as I did back then.

Gee: Little Witch Academia absolutely floored us all back in 2013 with its combination of imagination, charm, and energetic animation. The second OVA would go on to up the ante even further, proving what soaring heights Studio Trigger was capable of. In many ways, the TV series couldn’t compare to them. It lacks the same level of polish and its story meanders in a few places for just too long. However, the thing it never loses is the sense of wonder that permeates every corner of its novel setting. Additionally, the TV series gave us the kind of little stories that only its smaller but wider scope could achieve. Certain episodes went above and beyond in capturing the same energy of its OVAs in a way that just makes me smile when I think back on them. I wish all 25 episodes had managed to do that, but I’m happy with the ones we got all the same.

Aqua: Princess Principal is probably the most conventional anime we’ve ever praised on this here blog, but in this case that’s not necessarily a bad thing. It’s refreshing to see how the very things that make our supposedly favourite medium into what it is, aren’t necessarily detrimental to its quality. Princess Principal is not an exception, not a revolution, not the wildly creative vision of an uncompromising auteur. What it is is a story that is thoroughly enjoyable in every conceivable aspect of its presentation — from the top-notch animation to the cinematic direction, from the exquisitely plotted standalone episodes to the intriguing, non-chronologically presented arc plot, Princess Principal succeeds at nearly everything it sets out to do. At its best, it is an immaculately crafted, nerve-wrecking spy drama rife with twists few other anime would dare to attempt, and even at its most banal, it is a lovely time spent around a crew of surprisingly likeable characters. Along with last year’s runner-up Flip Flappers, Princess Principal solidified Studio 3Hz’s position as the current masters of the anime original. I can’t wait to learn what they’re doing next.

Euri: March Comes in like a Lion is an emotional, character-driven show that masquerades as a shogi anime. Kiriyama Rei isn’t the most interesting protagonist on paper, but where this show truly excels is in humanising its characters. Everyone seems real, burdened by the same real-world problems we have, and that in turn makes Rei a good protagonist. You feel awful for him due to what happens during his childhood, and you root for him when he plays shogi so that he might ease some of the pressure his peers have placed on him. You’re happy every time he’s consoled by the Kawamoto family, as you see Rei finally has the family he’s wanted for so long. The second season brings with it one of the most powerful arcs in recent memories, with its focus on childhood bullying. It’s here where Rei starts to show just how much he’s grown as a character, stepping up to repay the Kawamoto’s for all they’ve done for him, being there for this family that’s being torn apart. March Comes in like a Lion is a masterclass in creating realistic characters, and the gorgeous art and terrific music selection are the polish on what has been a phenomenal show so far. 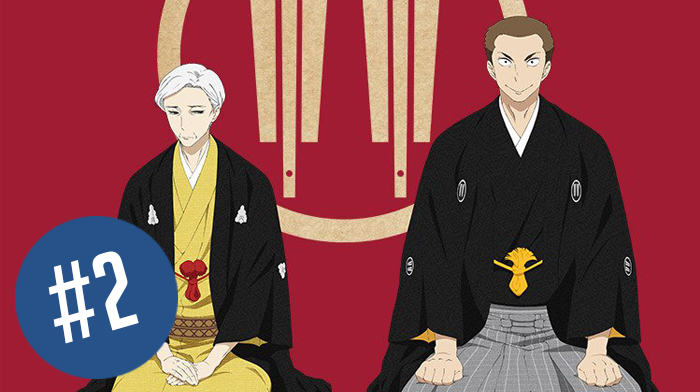 Artemis: I generally find it easy to talk about a bad show, but often far more difficult to talk about a really great one. And Showa Genroku Rakugo Shinjuu is indeed great; not just in how good it is in terms of quality, but also in how large a scope it covers in terms of time, place, and character depth. I can’t honestly say which season I think is better – in terms of technical merit I think they’re both equally excellent – but given that the second season wraps up the overall story, it’s possibly the more satisfying of the pair. It’s also in some ways more intense, perhaps due to its sharper focus on the present. Of course this means the specter of death is constantly lurking, as is so wonderfully conveyed in the subtly changing and creepily powerful OP. In all other respects however, I’m stuck using the same kinds of words to describe the second season of Showa Genroku Rakugo Shinjuu as I did the first around this time last year: finely-crafted, intricate, sophisticated, enthralling, and undeniably stylish. Simply put, this anime is a must-watch, and a triumph of the medium as a whole.

Zigg: Telling stories is hard. It’s incredibly tricky to shape a world out of pure imagination, to make it pulse with life and bend under the weight of imagined history, to fill it full of people and places who each have their own tales to tell. Likewise, it’s so difficult to build characters who your audience will empathise with, whose triumphs they’ll cheer along with and whose tragedies they’ll weep for. Any piece of media which achieves one of these is onto something, but anything that can manage two is on track to true greatness. Made In Abyss achieved them both with room to spare, and no little flair along the way. We gasped and cooed at the wondrous sights of The Abyss, at the inverted forests and the giant’s goblets. We laughed at the pratfalling young adventurers and jumped in shock at the ferocious monsters. And along the way we fell in love with the three very special people at the heart of the tale, who we so desperately wanted to see succeed and find the happiness they deserved. On every level, from every possible angle, Made in Abyss was a tour de force – incredible visuals, gorgeous music, a pitch perfect script, and wonderful acting all combined to make for one of the most compelling anime experiences ever put on screen. From joy to sorrow and everywhere in between, this story was one which simply captured the heart of everyone who saw it.