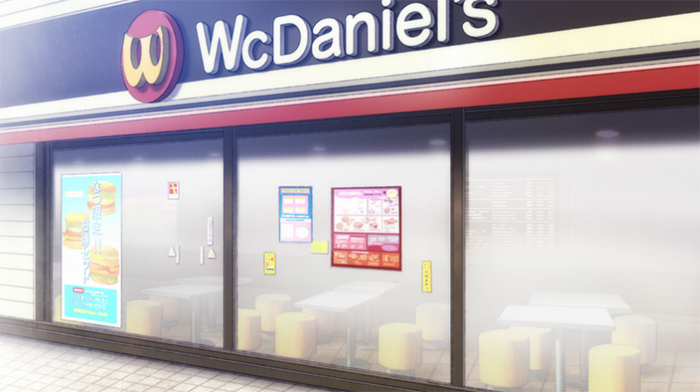 Top contenders School Babysitters and Takagi-san hit their first missteps, we still can’t decide a good short name for A Place Further Than the Universe (I’m partial to South Pole Girls), and most importantly, we pick up a corporate sponsor!

Jel: The first half had me worried we were falling back into the same pattern as episode 1 but the second half turned things around. Conveniently giving Yuu the ability to cook ramen well sure is an easy shortcut to get these crazy kids together, but it was cute enough that I’m not going to complain. I still don’t think Koizumi has a shot at winning this thing but it may have just bought itself another week.

Jel: I realized this episode you can draw a lot of parallels between this show and Ms. Koizumi – an energetic, overbearing girl trying to force a friendship with her stoic, knowledgeable schoolmate as they eat a lot of food – but I guess the main difference is the characters in Laid Back Camp are closer to resembling actual human beings. Well, at least Rin does, who is not totally obsessed with her hobby and actually cares about other people’s feelings. I still don’t know if I would say this show is better though, as Nadeshiko is still barely tolerable and frankly, the slow pace can get quite boring. I think they can do better. 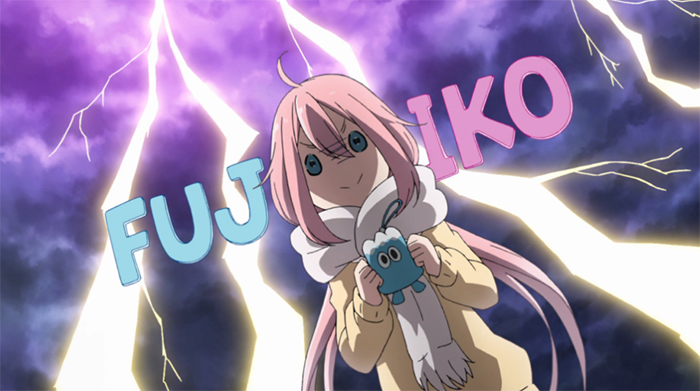 Jel: As adorable as this show is, I’m having a hard time getting truly invested in it. I get it, the mummy’s cute, now give me something more. The OP seems to indicate Kashiwagi’s friends will all have little creatures at some point so I was disappointed nothing new happened in this episode. All that said, should the day come I need to cut this show, I will feel like a monster, imagining Mii-kun looking at me with those big cartoon tears… I don’t want to think about it.

Jel: This episode had magic induced Tsukumogamis and a ghost ship made out of a turtle skeleton powered by scientific necromancy. Sounds cool, right? It was, but also just not very exciting. A cool setting and creative lore are a nice foundation for a show, but you need more than that. Giving our main characters even a sliver of motivation or purpose would go a long way toward making this more than just a pretty spectacle. 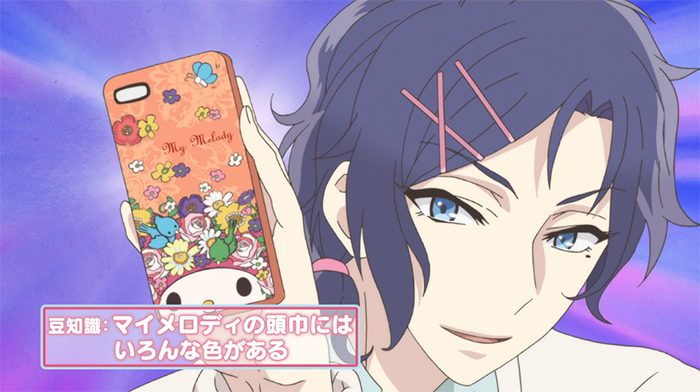 Sanrio Boys – Sanrio does not sponsor us (but can! Please email jel@theglorioblog.com)

Jel: The problem this week is they tried to smash the “boys shouldn’t like Sanrio” thing in with the other issues Yuu was having with this sister and it just didn’t work. Had they just left it as his sister feeling guilty about the burden on Yuu and used the My Melody notebook as the reminder of how much they care about each other, it would have been fine. By the end though, she was still calling him gross and not a whole lot was resolved. The attempt was well meaning enough that I can let this slide for now, and again I’m amazed I ended up writing this much about a Sanrio commercial every week. So we’ll see if they can come up with something more consistent next week.

Artemis:This episode was just fine I guess – nothing more, nothing less. My somewhat lukewarm reaction this time around can mostly be put down to a) just how completely unsubtle Sanrio Boys is when dealing with its Emotional Issue Of the Week, and b) how I didn’t feel like said issue was even satisfactorily resolved. Sure, Yuu and his sister are now on speaking terms again and she promised to finally start eating the food he prepares (which makes me wonder what and how she’d been eating other than school lunch every day). But she also didn’t apologize for being such a terrible person for the last however many years, didn’t offer to take up any of the household chores to give Yuu the free time he obviously still needs, and is apparently going to continue calling her brother “gross” for pretty much everything he says or does. It just didn’t strike me as an especially deep or rewarding episode in any way, and I’m glad the series is moving on to Yoshino next week, which will hopefully give the show a little more solidity.

Jel: This episode was fine in that at least it didn’t have any sexualized jokes like last week, but it’s clear to me these girls are just misbehaving and it’s supposed to be funny. Sometimes it is, but while I initially got the impression this show would be cute and sweet it seems the big joke is Colors claiming they will keep the peace when they are they are the biggest threat to it. We also still had an uncomfortable joke with the girls claiming Saitou hit them, which is probably at the core of what I’m complaining about. Everything is a lot more mean spirited than I was hoping for and I think it hurts the show overall.

Euri: Can we please not make it okay to accuse people of things they haven’t done in order to get something? This didn’t reach the same levels of the 3DS nerd scene in the previous episode, but acting like you’ve been assaulted isn’t cool either. I’m curious about how many kids watch this, as you’d think that its 10:30pm Sunday air time would mean that it was minimal at best, but the fact that they added a disclaimer at the end of the episode to dissuade people from climbing signs makes me wonder about that. The rocket launcher scene in the first episode is quickly looking like the highlight of the show. 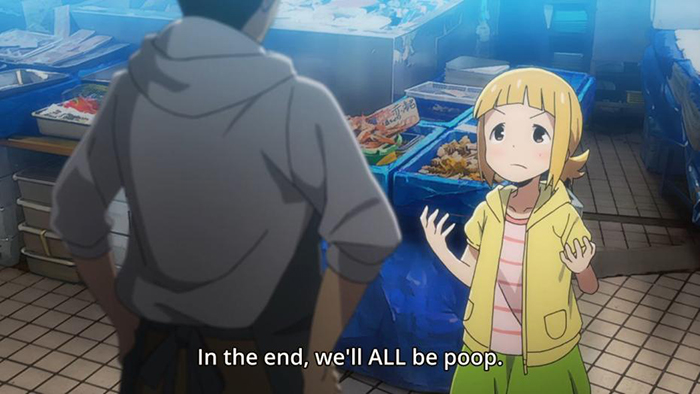 Jel: The Yagi thing is weird. If he’s not a pedophile, why don’t they want him around the kids? If he is, why is he in the show at all? There’s no middle ground on that one and yet that is kind of where they left it. It’s a good thing the rest of episode pulled through. I’m glad they didn’t just move on from the Inomata plot line as her development was rushed last week, and the bit with the twins and their dad was really cute. On balance I think it was still a good episode but I would have preferred to cut out Yagi altogether.

Marlin: It seems like the more characters we get in this show, the lower its quality got. It’s pretty lucky those bunnies were so cute last week, as this was an incredibly underwhelming episode. The whole idea of a joke about a guy acting like a pedophile around the children is super not cool, and despite giving the tennis girl in love with the MC like five lines we never even learn her name! The second half was pretty dull too, as the jokes about this dad fall pretty flat when the kids just turn around on a dime and nothing seemed to have any narrative flow. This show will have to shape up if it doesn’t want me to drop it by next week.

Jel: This is the first time the skits with the three girls went from “meh” to actively annoying, particularly the soda one. Not even the passable cat dubbing at the end could make up for that. Meanwhile I have no idea how they are supposed to keep this tension up between our main couple for like nine more episodes. Takagi is throwing herself at him at this point, literally if you want to count the umbrella scene. So long as it stays as adorable as it’s been we should be good, I could just do with less of the three girls.

Marlin: This episode does a lot to waste the good will the Takagi-san segments of the show build up, this time giving us not just one but three skits involving the patently unfunny girl trio. It also seems to give up the facade of this show having anything to do with teasing and just has our pain pair flirt for fifteen minutes. Not that it wasn’t cute, but it felt a little on the nose at times. I don’t know if Nishikata deserves Takagi if he can’t pick up what she’s putting down after being that blatant about it. Still, it’s been good enough to keep me with it. Just, please, less trio segments please, they cannot make a joke to save their lives. 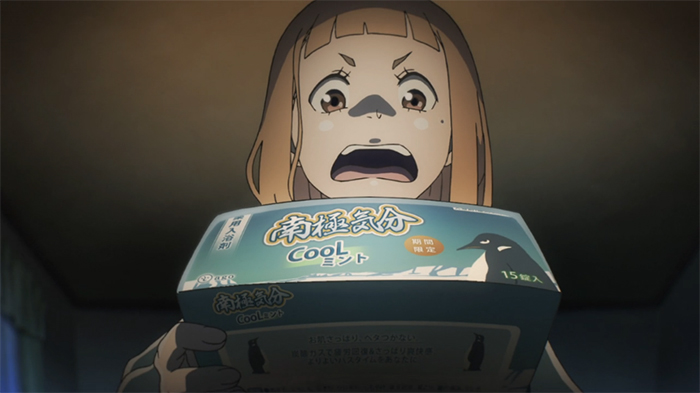 Jel: One of the strongest points of South Pole Girls is how the characters look like they’re going to be a certain stereotype and end up being something different. Or maybe it’s more accurate to say they look like they’ll be one type but it turns they are ALSO another thing. Multi-dimensional characters in our cute girls doing cute things anime? How times have changed. The captain was a good example of that this week, although for me the show stealer was the brief moment we see Shirase composing an email to her mother. It was a powerful little scene that really helps us understand her motivation and gives a sense of purpose to the show, all without a single word spoken. Well done.

Marlin: Another impressive episode by Antarctica. The budget for this show shines again, particularly in the fantastic scene when Mari has to confront her mother. After the dad started holding the door closed, I lost it. While some segments may have meandered a little, it did give off the slow paced feeling real camping trips have. We also get a real subversion of the airhead main character at the end. Usually in your bog standard cute girls doing cute things show, the MC stays a malleable buffoon, mostly motivated by vague senses of passion and friendship. Mari acknowledges the shallow nature of such a desire, and shows how that has evolved the more she has gotten to know her friends and gain a real desire to see Antarctica for its own sake.

Brought to you by WcDaniel’s: Official WcDonalds of Ms. Koizumi Loves Ramen Noodles 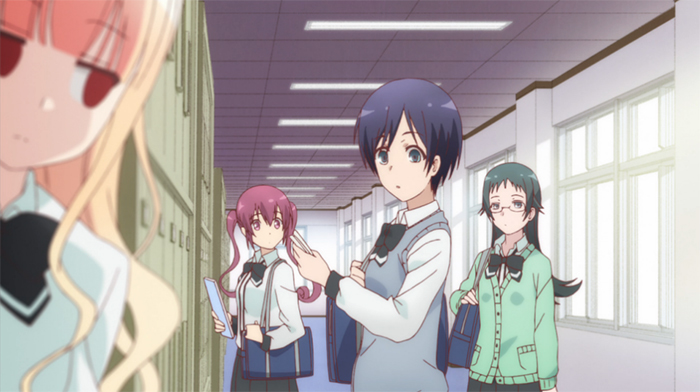 Look, I still can’t tell you with a straight face Ms. Koizumi is a good show, but it has improved every week and the end of episode 3 felt like good pay off for our patience. It was nice to see that Koizumi isn’t just some emotionless ramen monster and is at least capable of feeling and expressing gratitude. Seeing her sneak around to watch Yuu’s reaction to her pile of coupons was easily the most endearing thing she’s done so far and now I’m actually looking forward to seeing these kids hang out more. Finally, shout out to WcDaniels for sponsoring this moment – WcDaniels: when a hot noodle-obsessed weirdo has you weak in the knees, ask her out to a Wacky D’s. 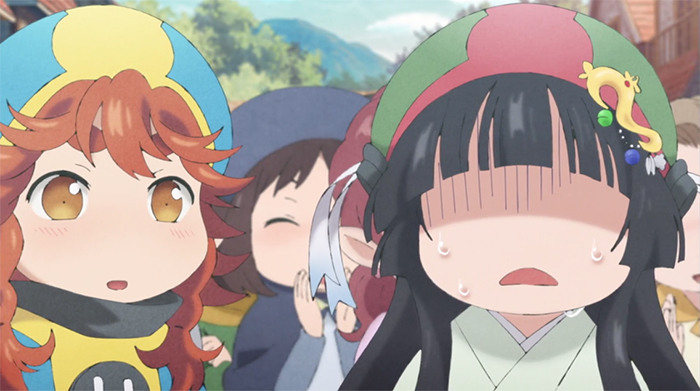 This show has a lot of good things going for it, but none of them come together well enough to make it interesting. I found episode 2 incredibly boring as there’s almost no context or reason for anything to happen, and I don’t suspect that will change anytime soon. I’m sure there will be people that still enjoy this and that’s fine, but it’s the show I’m least looking forward to watching more. And so for that, Hakumei and Mikochi is… 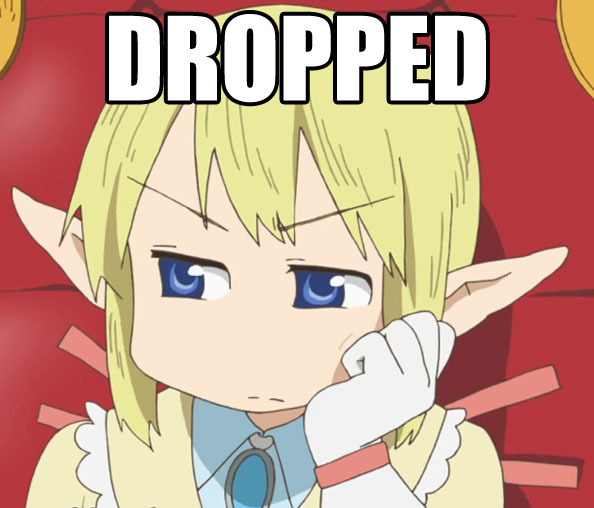 2 thoughts on “The Roundup: Winter 2018 Cute Anime BATTLE ROYALE Round 2”