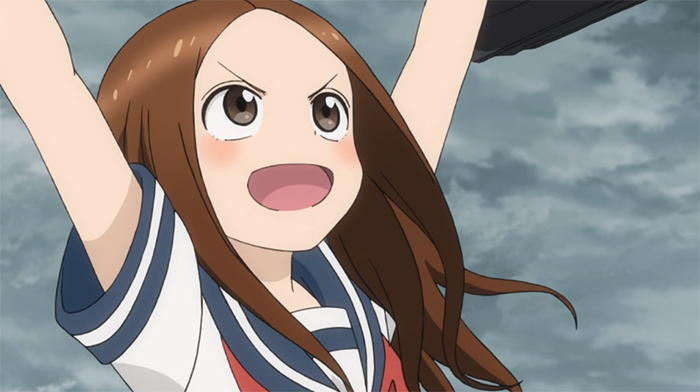 A rough week for the Battle Royale as all four of our remaining shows fail to put out a great episode. Laid Back Camp and School Babysitters struggle with sub par outings, but even Takagi-san and, dare I say it, A Place Further Than the Universe have issues of their own. It all culminates in the most difficult elimination yet, and it ain’t gettin’ easier from here on.

Jel: Remember that time K-ON! did an entire episode about going to a hardware store and buying a table? While it did produce some classic GIFs, that stretch of episodes where the girls were literally doing nothing was the lowest point of the series. This episode of Laid-Back Camp feels like it would have fit right in, which is not great considering the timing. This late in the series I want to see more than just going to the camping store, eating steam buns, and figuring out how to remove lacquer from wooden bowls. Granted the girls are still charming in a more realistic way than K-ON! ever managed so that makes it palatable, but this is a FIGHT TO DEATH here! There’s no time left for average episodes.

Jel: It’s really sad to see how far this show has sunk into anime clichés. It started out with the most unique premise of all the Battle Royale shows and now it just feels like its going through the motions. The Ryuuchi/Inomata/What’s-her-name love triangle is still kind of cute since I’m a sucker for that kind of thing, but honestly its very uninspired and nothing we haven’t seen a million times before. The second half is just a standard festival episode, except this time with little kids. Seeing as next week it even looks like we’re getting a beach episode, I am seriously concerned School Babysitters has run out of ideas.

Euri: This is easily the weakest episode so far, but I don’t think I’d go so far as to call it bad, either. Kotaro treating his brother as if he had a cold was adorable, especially as we see him specifically go through the same motions as the last time he was ill. The festival was pretty throwaway though, but props for not throwing the love triangle into that part too I guess? 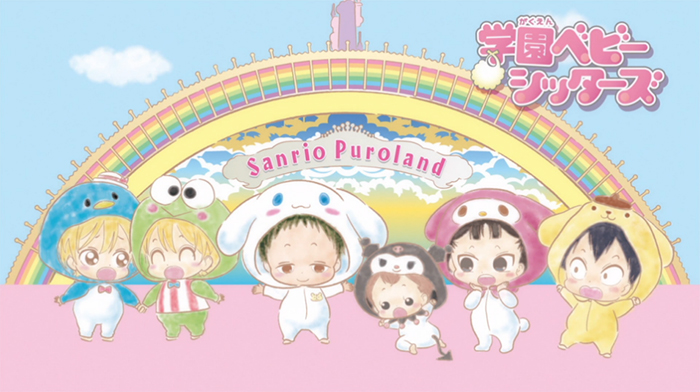 School Babysitters – The Sanrio Boys get their revenge

Jel: ​First up, did anyone think it was really weird how Takagi and Nishikata just stood their casually talking in a typhoon for like ten minutes? Just throwing that out there. I also loved how they can no longer deny Takagi’s psychic abilities, even though they might have gone a little too far with it this episode. Other than that, the three girls continue to drag things down and I must admit even the mainline Takagi-san segments felt stretched thin. I mean, how long did it take Nishikata to finally poke her ribs? I guess the hesitation was supposed to be cute but the more cynical side of me says they were just killing screen time. This was basically an average episode, but an average episode of Takagi-san is better than a lot of things so it could be worse.

Jel: I don’t want to overreact but the dumb little romantic subplot thing felt so beneath The Captain that it made me angry. Granted that was probably half the point as our pathetic lover boy was kept in his place. Even so, it felt unnecessary. We also got a healthy dose of the melodrama we’ve been complaining about which seems to happen any time Shirase’s mother comes up. Complaints out of the way though, they do a great job with Shirase’s swirling emotions. It added a lot of depth to her character, and ending on such a triumphant note felt very satisfying. So even though I could poke a lot of little holes in this episode, they stick the landing and that’s often the most important thing.

Euri: I didn’t care at all about this new guy chasing after the captain, not least as it was just thrown in as a means to get Shirase and Cap to sort their relationship out. That said, it was good to see them take steps to resolve how awkward they are around each other, and hearing the last words of Shirase’s mum was heartbreaking. The best part of the episode was learning how icebreaker ships work – I had no idea that they were so damn cool.

In Your FACE – A Place Further Than the Universe

As the background music cuts off and all you can hear is the sound of boots on metal stairs, you know this is going to be a big scene. The girls’ first time actually standing in Antarctica hits all the right notes, from Hinata telling Shirase she should go first, to Shirase taking everyone’s hand and making them all go together, to her soaking in the gravity of the moment and defiantly rubbing it everyone’s face. I might complain about how this show handles some of the smaller moments, but the fact that it does well with the truly big ones has me feeling good about the final few episodes. 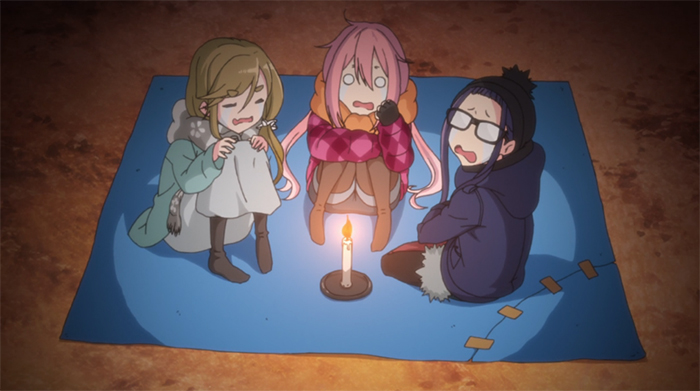 This was a really tough choice. I had to decide between Laid Back Camp and School Babysitters and it basically boils down to potential. Laid Back Camp has been on a slow and steady climb from kind of annoying to really good. But I’d argue it has hit its peak, especially after this week’s dud of an episode. I’m sure the final few episodes will be perfectly fine, but will they be truly great or memorable? Probably not. Meanwhile, School Babysitters has been flailing around, burying its potential under annoying side characters and anime clichés and yet when I ask myself what show I would more look forward to watching next week, it’s what I would choose – and no, not because it looks like we’re getting a Hot Moms at the Beach episode, I swear! The chances of School Babysitters reaching its potential for greateness are slim, but there IS a chance. I can’t really say the same for Laid Back Camp, and that makes me sad because the show has come so far. And so with that, I regretfully must say Laid Back Camp is…