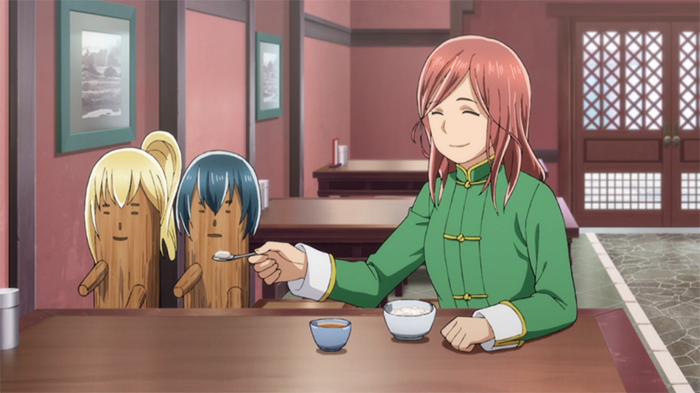 In our final Roundup of the season, we say goodbye to Real Girl (for now), Hinamatsuri (for now?), and Amanchu. Enjoy them while you can, next season is looking rough.

Jel: ​Shockingly, a second season of Real Girl was announced for January, assuming Hoods Entertainment still exists by then. With that in mind, I’m OK with this episode as a stopping point. There are a lot of loose ends to cover: Igarashi’s step brother, the 6 month time limit, Ito’s crush on Ayado, the list goes on and on. So good to know we can come back to those things later.

As for the episode itself, it was equally sweet to seek Igarashi’s trust in Tsutsun pay off and infuriating to see her step brother try to intimidate her. I love that they completely shot down the “they’re not really brother and sister” plot thread that runs through so much light novel trash these days, with Igarashi reminding her brother that being blood related is irrelevant to their relationship. I’m still mad about redeeming Takanashi and I will be FURIOUS if they redeem this guy, but sadly they probably will. On that note we’ll sign off on Real Girl, a solid first season despite some of the occasional dumb clichés and bad production values. Hopefully we’ll be back in January?

Jel: ​I guess we’ll just ignore everything that happened last week??? I mean, at this point nothing Last Period does will surprise me so I’m OK with just moving on. What was strange about this episode is there actually were no surprises at all. I was waiting for some current event parallel between the two towns to materialize, especially since the episode title is “fictional story” and by Last Period logic that means it must be based on something real. But as far as I can tell this final plot arc is just what it looks like at face value. I find that slightly disappointing for sure, but they did smartly lean on WISEMAN, the heroes we don’t deserve. Seeing them courageously battle the Androids was a surprisingly great moment. Now if they can only come up with SOME kind of huge surprise or grand statement in the finale, I think I’ll be pretty satisfied with the series overall.

Jel: This was a much better episode than last week, delivering some action, drama, and intensity before bringing us to a good stopping point for the second half. Destroying Kurisu’s laptop doesn’t resolve anything of course. I’m assuming this just means Amadeus is the next big threat to bring on World War III. I’ve been saying for a long Amadeus will have to help Okabe fix everything, the only question I have now is can everything be fixed? Even if Amadeus figures out time travel, can things be changed or is Kurisu’s brain too much of a threat? I’m still leaning toward believing they will find a good resolution and we’ll see the triumphant return of Hououin Kyouma, but maybe not? These are good questions to have a the midpoint of a series.

Jel: ​Had this episode ended with an announcement for season 2, it would have been brilliant. Had they extended the first half out more and let us spend a few more minutes with the main cast, it would have been great. Even just swapping the first and second half would probably have made the episode better. None of those things happened though, making this episode just “good”. For a show that has been as fantastic as Hinamatsuri, that’s a little disappointing.

The actual content of the episode was great. The first half was classic HInamatsuri, putting Hina and Hitomi in a bad situation that is just serious enough to make Nitta show that he cares. In the second half, bringing back the baffling opening scene of the series now with 12 episodes of context was a brilliant way to setup the next stage of the story. I can totally see why they chose to do that. Again though, without some guarantee we will see more I’m surprised this is how they decided to end things. To a certain degree I can admire the concept of wanting to do something totally unexpected, but this was probably a bit too far. And so I’m a bit sad we have to end our time with Hinamatsuri on a slightly negative note, but even so I think the series was brilliant overall and the best anime comedy I’ve seen in a long time.

Amanchu – Despite everything, I still ship it

Jel: ​After all the attempts to mix up the formula, Amanchu ends the same way it began: Pikari and Teko bonding over scuba diving and the adults dropping life lessons all over the place. I realized with this episode that series is ending just as my patience for its unending optimism and focus on finding fun when you’re troubled has run out. Back when the first season aired in 2016, those things felt like a comforting salve as we tried to navigate the world falling apart. Now in 2018 it almost feels irresponsible. It’s not that any of the life lessons in this final episode are necessarily wrong, and no matter how dark our timeline has gotten it’s still important to have fun when you can. It’s just right now doesn’t feel like the right time to talk about that. Maybe it’s unfair to hold that against a manga that was written years ago, but nothing exists in a vacuum. We have to face reality at some point. So it’s probably for the best that we say goodbye to Amanchu before it overstays its welcome. We can look back on it with fond memories and move on.