Spirits are out there, doing shady spirit things and committing spirit crimes. Fortunately we have a strange kid who is well versed in magical law, and he’s ready to find them guilty and send them all to hell.

It’s been a long time since I’ve seen a show so tonally inconsistent as this. From the opening sequence, you’d be forgiven for thinking that this is somewhat adjacent to shows like GeGeGe no Kitarō, as it has a similar art style that screams 90s early morning shounen. Our introduction to the lead two characters is also reminiscent, although I would argue that Muhyo, the short definitely-not-a-human in charge of magical law, circumvents this slightly when he displays some very try-hard expressions in a failed effort to inject some humour into the show. Granted, Ushio and Tora has the advantage of actually being a 90s show, but I would point to that (and its recent reboot) in how to do this expression-heavy humour well.

When it comes to depicting the spirits, the show shifts from its kids show aesthetic to something a little more adult, as the show touches on topics such as suicide, murder and revenge. We see a guy getting pulled onto train tracks, we see a girl fall in front of a train with an accompanying splatter effect, and we later see this girl’s monster-like spirit choking out a girl she clearly had a romantic interest in while she was alive. But this tonal shift is massively jarring, as it flits back to its early morning shounen vibe every time the not-human protag uses his book of law to punish the monster, and then back to more adult tones straight after.

On top of this, the story feels rushed. We quickly skim the details of this particular case to have it resolve in the twenty minutes the anime allows, but you’re left wondering if this wouldn’t be a lot better if it slowed down, went into more detail and approached the story with a little more care. It’s always going to be a shounen show, as this is ultimately about killing monsters in creative ways with the help of magical law, but that’s not interesting in and of itself. The stories that surround that are meant to make it interesting, and this first episode doesn’t do anything to make me confident the rest of the series will be handled well. 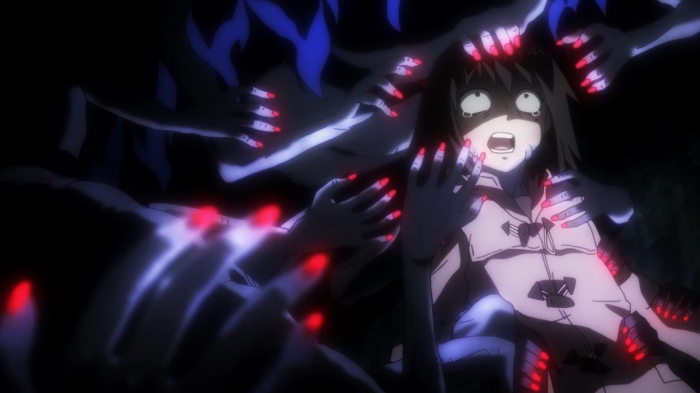 Artemis’ verdict: Or, Hell Girl and Gegege no Kitaro Have A Baby

Let me just preface this by saying that, no matter my personal enjoyment (or lack thereof) of Muhyo & Roji, I think it’s a show everyone should at least check out. If nothing else, it’s wildly different from any other currently airing show, and it also happens to be far more complex in its themes – and subsequently far darker – than it appears at first glance.

That being said, Muhyo & Roji still isn’t something that piques my interest in a more subjective sense. This is in part because I absolutely can’t stand the character designs, or for that matter even the characters themselves. Muhyo looks and sounds like a pretentiously evil five-year old wizard, but evidently has one of those coveted Dark, Hidden Pasts to angst about in his spare time. Roji looks like a teenager, but acts about as clueless as a ten-year old (i.e. the emotional age of most action/adventure shounen protagonists). In fact, the whole show is peppered with the sort of dumb, unfunny shounen humour you’d expect from such a title going from the artwork, but which makes for an outright jarring contrast with the rest of the content. Don’t get me wrong, humour of some kind is definitely needed here, since Muhyo & Roji would come across as almost ridiculously serious otherwise, but it could’ve done with something with a bit (okay, a lot) more thought and polish in that department. I also don’t care for the execution of the fantastical elements from Muhyo’s end, because the way he vanquishes demons to Hades is by… reciting rule numbers out of a book that demons just sort of have to abide by I guess? That’s it. There’s no sense of effort or suspense there, nor any kind of logic or worldbuilding as to how any of it works – or more importantly, why the audience should care. And without that kind of framework fused into the story, I unfortunately can’t bring myself to engage with it on any meaningful level, no matter how much the actual story makes me want to do so.

As the others have said, this show is a pace and tone rollercoaster, and not in a good way. It’s also got some comically over-acted non-verbal voice work in the intro. Its cardinal sin from my perspective, though, is the predictable malicious laziness of introducing a gay romance only to end it in death almost immediately. Do better, folks.