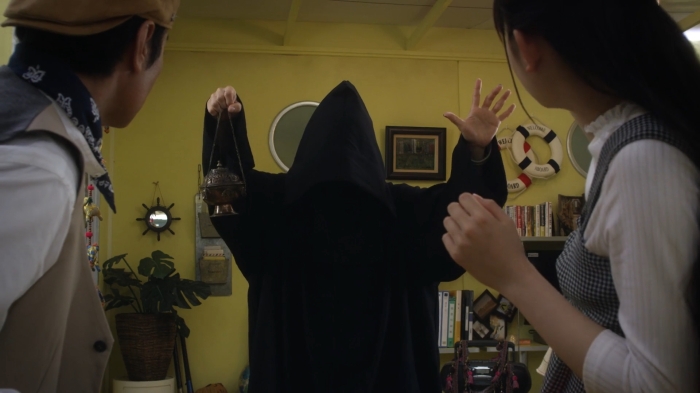 An ex-police officer and friend shows up at the Minato household for their once-every-four-years rock paper scissors tournament. Due to Aizen’s meddling, she later becomes a monster and almost dies.

We knew that R/B‘s quality wasn’t going to be on par with the last episode, but it was quite the dip. The monster fight was fine, the interactions with Koma were fine and the episode as a whole was… fine. There are a handful of fun moments, but they’re few and far between in this largely unremarkable episode.

One part I did enjoy was how they handled Koma’s exposition. Sure, the flashbacks have that gross colour grading going on that j-drama flashbacks love to use, but content-wise they were a fun bit of character building. There was also a brief section which used striking colours to describe her, giving a genuine sense of mystery to her character and making me wish we could have some of this focus on the regular cast. That’s my biggest hangup with the episode – spending valuable time on character development for a throwaway, new character instead of focusing on one of the regulars to make us start caring about them. The experimentation is appreciated, at the very least.

This was also the first time that Aizen truly felt like the bad guy. Sure, he’s still showing up and acting goofy like he usually does, but we see him visibly annoyed with the way his monster is fighting the Ultramen, and we see him use Koma against them when he turns her into the monster of the week, Mecha Gomora. I’m hoping we get to learn a little more as to why this was done; Is it an attempt to prevent the Ultramen from stopping the monster if it knows the person inside? Is Aizen still trying to get specific reactions out of the brothers? He’s annoyed with how the fights have been going, but we don’t know why.

Actually, the start of the rematch with Mecha Gomora had some pretty funny moments, mostly due to some no-selling on the monster’s part. More of that goofiness, please.

We got new fashion! Our protagonists are still wearing their still-pretty-good-but-getting-boring uniforms, but the ex-cop in this episode brought a frankly alarming variety of the freshest styles, and the shop got some new shirts too. This is the only thing that really matters to to me. None of the stuff worn in this episode is featured in Bandai’s new line of R/B-themed clothing and accessories (!!) but you can totally get that awesome uchuu~n shirt if you want it. You can also get the bad and awful amidakuji shirt, but hecks to that.

I love that this show goes out of its way to make my favourite character, Aizen’s adorable drone, as shitty-looking as possible; it wouldn’t be too much of a tonal shift if at some point they visibly highlight the fishing wire it’s hanging from. As we saw from episode 5, they clearly have the chops to make it look distinctive and cool, if not necessarily convincing, which only makes me appreciate more the ’50s TV sci-fi look they’ve gone with. It’s a pity, then, that after episode 5’s demonstration that they are capable of and interested in doing some really unique stuff in the fights, episode 6’s fights are so dang rote. Perhaps I should just treat the rock paper scissors games they played as the real fights.