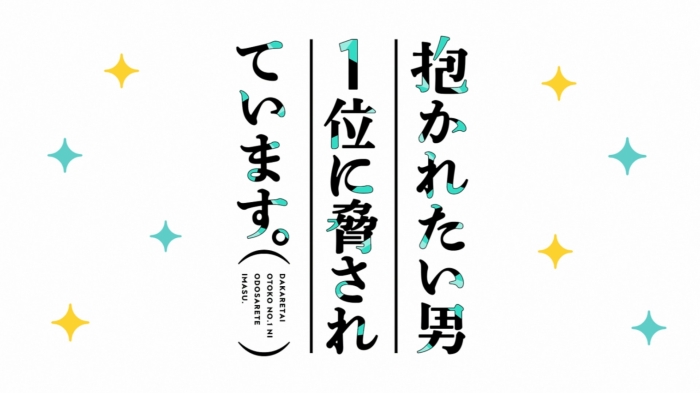 An unlikeable guy who is annoyed about not winning the ‘Man I Want To Be Hugged By’ award for a sixth time in a row is sexually assaulted by the man who won instead.

Euri’s verdict: Man I Want To Have Something Good To Say About This Show

Even without addressing the big reason I disliked this show, Dakaichi is not a particularly inspired yaoi anime. Everyone is looking 7 feet tall and handsome, they picked out some sexy-sounding VAs and then threw a senpai and kouhai into the show to make them fall in love. I don’t think that’s going to particularly surprise anyone either so you may be okay with that, but there was very little to be found here that was trying to do something different. The best I’ve got is that the younger of the two is the more romantically aggressive partner.

Personality wise our protagonist, Takato, is completely unlikeable. He appears to act as if he’s above everyone else to keep a mysterious persona about him, but it’s tiring already. It’s fortunate that there won’t be much more of that – he’s definitely a bit of a tsundere when he’s around Junta, his younger colleague and romantic partner, but it wouldn’t have been bad to have a reason to like the guy before him and Junta get together. Junta himself is an inquisitive guy who isn’t afraid to say what’s really on his mind, and for the beginning of this episode at least, he’s fairly likeable. The extra cast were basically non-existent in this episode, but I don’t think that’s necessarily a bad thing. They made way for the main characters to get established, so fair enough. 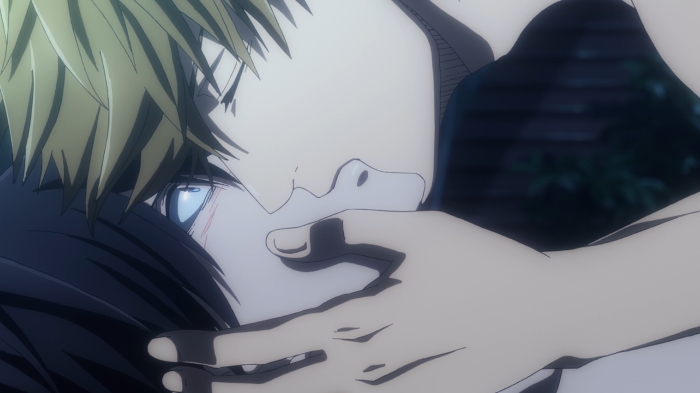 On paper, the way Dakaichi races into a relationship is impressive. We have plenty of shows that spend most of their season falling over whether they’re in love, how to talk to the person they love, all that nonsense. It makes sense – these guys are adults, they have jobs and they don’t have to slip notes into each others’ shoe lockers just to fumble the confession they’d been working on. The trouble is, everything about their first ‘romantic’ encounter was incredibly rapey. At the end of the day, Junta asks Takato to have sex with him, and pounces on the guy before he can even respond. Takato is kissed, he kicks Junta away, and he runs to the bathroom because it has a lock on the door. Junta forces the door open and kisses him again, before finally stopping when he’s pushed back a second time.

No thanks, show. There wasn’t even an attempt to properly apologise for this, and Junta even drags Takato back to his apartment later on to have sex despite Takato’s protests (though, in this instance, there appears to be consent by the time they’re on a bed). I’m sure this isn’t that uncommon in the grand scheme of things when it comes to yaoi shows, but it’s not like it’d have been difficult to play these scenes out, while still having Junta being assertive, without the whole sexual assault angle. 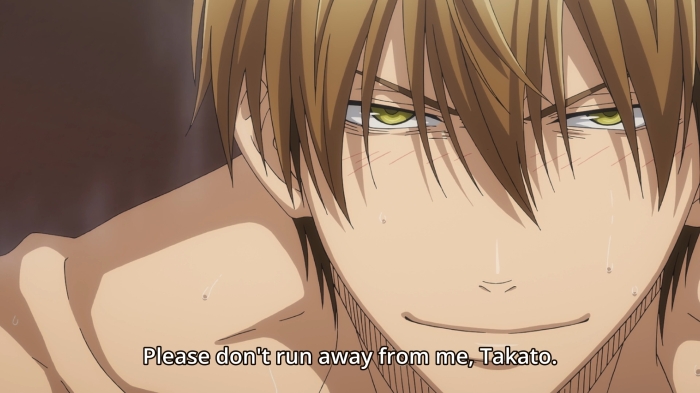 colons’ verdict: I just skip straight to the last chapter, it saves a bunch of time

If we were to believe that this is the absolute beginning of these two’s relationship, then yeah, the events of this episode are pretty fucked up and not really representative of any kind of healthy relationship. I don’t completely buy that, though. Certainly, regardless of context, Junta crossed a line here, and I definitely would not defend his actions, but there’s some history we’re not getting that might reframe the events of this episode somewhat. There’s a very short, very throwaway moment where Takato thinks back five years or so to the first time the two of them were in the same scene in a show they were shooting, and it is implied that they’ve been working together regularly since then. We know nothing of what happened between then and now. For all we know, the bedroom scenes in this episode were part of an elaborate role-play the two of them had dreamed up to keep things exciting.

Obviously, this is an absurdly generous conclusion to come to. There are cute moments here, and I’d love to be able to unburden them from Junta’s actions, but this headcanon won’t stand up to scrutiny. The problem is, though, that we have almost exactly nothing else to go on. We know that there are many years between their first sexually charged moment together and now. We know that at some point during that time, Junta decided to seriously pursue a relationship with Takato. We know that Takato was, at the very least, aware of this on some level. The tension has been building for a long time, and this may not be the first encounter like this that the two of them have had.

There is a story in this gap worth telling. I don’t understand why Dakaichi has opted to start telling it from the last episode of the first season. You can’t break sexual tension that’s only set up after the fact. 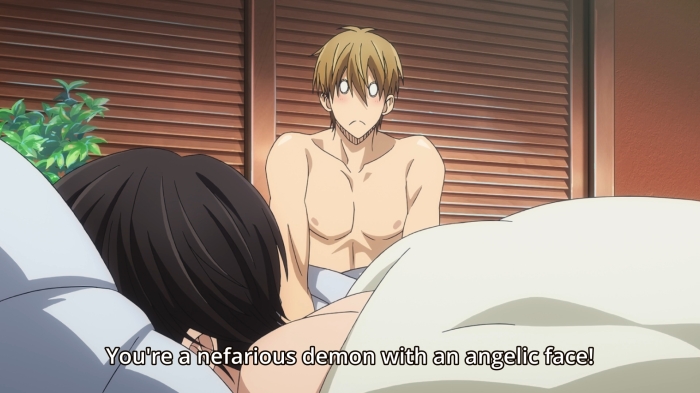