Akane creates a powerful new monster, which manages to defeat Gridman in battle. Sho and Rikka are forced to come to terms with the idea Yuta might be dead.

Gridman continues to go from strength to strength, with this episode probably the best yet, and an outstanding example of how it continues to blend old-school cheesiness with more subtle, nuanced character work and mood pieces imported from an entirely different type of show. The net result is an installment which both tugs on the heartstrings and provides a good healthy dose of whoop-ass all in a single package.

We talked a little bit last time about how Rikka seemed to take the loss of the missing girls much harder than the two boys, and this episode continues to explore that thread effectively. Her decision to skip school and avoid the company of Yuta and Sho is telling, as she’s basically choosing to reject the two people she can actually talk about the situation frankly with. This even goes to the extent of declining Yuta’s phone call, even though we as the audience know it was made because he’s genuinely concerned about her welfare. Yet she’s clearly also starved for some form of affection and company, because she chooses to approach Anti and offer him her lunch, in the hope of forming some sort of connection with another person. When Yuta appears to be dead, Rikka takes it the hardest, as she regrets not reciprocating his gesture of friendship. We even see her start to apologise before the battle, which obviously makes her guilt afterwards that she couldn’t jsut spit it out that much more palpable.

It’s clear Rikka fears rejection and loss so much she can’t bring herself to begin engaging people because she’s afraid she’ll lose them, clearly seen in the scene where she can’t bring herself to ring Yuta’s doorbell because it would provide a definitive answer as to whether he’s gone or not. That tendency has clearly been exacerbated by recent events, but it’s tough not to believe she’s got some deep seated reason for the way she acts, maybe a traumatic incident in her past? Some I’ve seen some talk that the conclusion of Yuta’s dilemma is rather underwhelming – Rikka just calls him on the phone – but I couldn’t disagree more. It’s a fabulous bit of character building, with Rikka finally forced to confront her mistake from earlier and proactively reach out towards her friend, and being rewarded with the knowledge that he’s still alive. It’s also masterfully underplayed by the show, keeping the focus low-key and doing the all important show-not-tell, keeping the character implications as subtext rather than having the lesson of the week be blurted out. Top stuff. 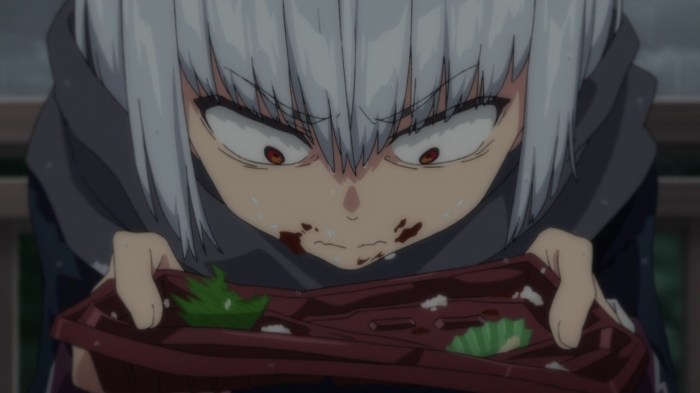 While Rikka gets the lion’s share of development, there’s solid stuff put in for the others too. Sho’s suggestion that maybe the kaiju are actually people is absolutely false, as we know the moment he says it, but it’s a clever play on a pretty standard toku genre trope, namely the shocking swerve that the monsters were *gasp* human all along! What’s great is that the show then immediately subverts its own subversion by revealing that Akane’s latest monster actually is human!…or that he looks it at least. Anti’s an interesting cypher at the moment – he clearly hates Gridman and humanity with a passion, but there are also hints of bewilderment and vulnerability to him. His relationship with Akane is largely painted as a grudging child to an mother, but there are darker undertones, such as her disturbing attempt to cop a feel in the restaurant or the angry final shot. It’s yet another compelling mystery in a show rammed full of them.

With all that emotional heavy lifting to do in the first three-quarters of the episode, the ending does exactly what you’d want – a triumphant, theme-song backed asskicking with an awesome new powerup to play with. While we keep talking about Gridman‘s story strengths, its command of visual flamboyance has never been in doubt and is lifted to new heights here in the awesome battle sequence. One advantage Gridman seems to have over previous Trigger shows is a much smoother integration of CG elements, helped considerably by the fact that they’re pitting chunky robot against bizarre monster. The combination of classic toku shot blocking, seamlessly integrated with the far greater dynamic possibilities of an animated ‘camera’, and of course the studio’s trademark hyperkinetic swoops and pans, gives these fights a great ability to convey both huge scale and impact, and also an unmatched sense of movement all at the same time. And lest it be thought we’re only lavishing praise on the fight, this entire episodes is filled with incredible visual work, from Yuta’s elastic bewilderment at Calibur’s arrival, to the wonderfully framed shot that shows Sho and Rikka reflected in two separate mirrors, metaphorically split apart. 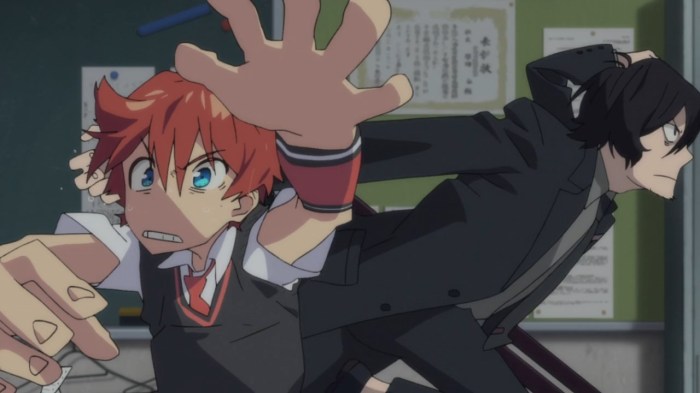 In case you haven’t worked it out by now, this episode was an absolute tour de force and only added to my growing belief that Gridman could be something very special if it continues like this. Fingers crossed.

Gridman continues to intrigue and inspire with its third episode, showing that the genuinely interesting heart beating inside of it in its first two episodes wasn’t a fluke. It continues to evolve in fascinating ways while maintaining an impressively faithful commitment to its Tokusatsu-style narrative structure. The first half of this episode is all about communication, or in some cases the lack thereof. Sho’s offhand joke about the Kaiju secretly being human beings leaves a heavy weight on Yuta, leading to his defeat at the hands of this week’s monster/human/whatever hybrid, Anti. Then Sho and Rikka’s inability to speak openly with each other after Gridman and Yuta’s seemingly premature demise prevents them from checking in on Yuta or asking their classmates about him. It’s a little on the nose, but the shot of Rikka and Sho separated by the mirror reflections does a fantastic job of communicating the gulf between them despite their close physical proximity.

Thankfully, we have the arrival of the remaining Neon Genesis Junior High Students to offer some external advice. Once again, Gridman works in simple but highly effective strokes, culminating in Max’s excellent line, “Do you normally ask strangers how your friends are doing?” It cuts right to the core of this episode’s themes of communication and how insultingly simple it is to just talk to other people in the 21st century. The ability to communicate then becomes our heroes’ greatest strength. Rikka finally calls Yuta and confirms he’s alive. Yuta/Gridman’s ability to simply ask Anti if he’s human reaffirms their conviction. The rest of the episode plays out pretty predictably, but it’s a satisfying payoff that feels earned by the first half. Sure, the personfication of our characters’ growth is a truck with cannons that transforms into a pair of giant fists for Gridman, but it really works.

It helps immensely that Trigger brings their usual flair to Gridman’s rematch with Anti. There’s a lot of great details at work here, from Max’s giant truck fist transformation including little tabs where they would exist on an actual corresponding toy or the surprisingly really well choreographed CG bits. The shot of Gridman’s overhead punch-to-suplex combo is so fluid that you almost think it’s a continuous shot the way it’s composed. It’s a hallmark of a real mastery of CG’s unique strengths that make it work in conjunction with its more traditional 2D animated scenes. I’m usually pretty dismissive of CG mecha but if it’s what allows Trigger to save their manpower for the 2D scenes where it really matters, I can appreciate its judicious usage. Overall, Gridman’s unexpected mix of sincerity, deft visual storytelling, and bombastic action is quickly turning it into the show to watch this season.