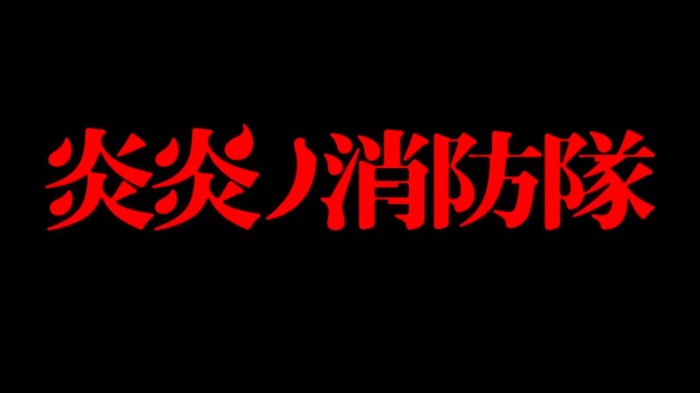 In an alternate universe Tokyo, spontaneous human combustion is real and turns people into monstrous fire creatures. The young Shinra – a third-generation pyrokinetic – joins the Fire Force’s 8th Squad in order to save people and discover the truth hidden in the flames.

If you’re making a show entirely about fire, you’re going to live or die based on whether the fire actually looks good. I’m happy to report that Fire Force‘s first episode looks extremely good, with some truly spectacular action sequences and excellent 2D effects throughout. Everything else – plot, characters, the substance upon which the style rests – is more stock standard shonen, which (while not necessarily a bad thing) is certainly less immediately exciting. The show has definitely earned the chance to continue to impress me, but if the writing itself doesn’t pick up, it’ll join Demon Slayer on the list of shows I watch for the spectacle and not because I actually care about what’s happening.

So far this season I’ve knocked Astra Lost in Space and Dr Stone for relying too much on hoary old shonen tropes, but Fire Force shows that you can still teach an old dog new tricks, because while it’s not revolutionary it’s fun, solid pulpy action with a secret weapon that really makes it sing.

While we’ve seen a lot of the elements here before, Fire Force assembles them in a manner that still makes the premise intriguing. The idea of people spontaneously combusting is actually pretty horrifying, and the writing here does a good job of walking the line between campy action adventure and serious business drama. Even the religious angle is just underplayed enough to spark my interest. While Shinra is a pretty stock hero (tragic backstory, eager kid out to prove himself, rare powers), he’s not unlikable and while the surrounding cast don’t have much chance to show off range we get a good sense of comradeship right off the bat. These are small things but they’re important details to lift a show up out of the doldrums and get us excited.

The aforementioned secret weapon is of course the absolutely ballistic animation, which crucially sells the danger and ferocity of battling through a firestorm. Paired with some very slick fight choreography and some nifty camera sweeps, it just makes the show a pleasure to watch, and sharp directing means even the more relaxed scenes convey some great stuff through visuals alone. Plus, Shinra Rider Kicks a fire demon’s heart out. What’s not to like?

Let it be said, Fire Force is a visual feast for the eyes. Boasting some real A-list talent (largely poached from Shaft) and an uncommonly generous production schedule, Fire Force is one of the most visually impressive debuts I’ve seen since the likes of Mob Psycho 100, rivaling the sort of quality you only see in movies or OVAs. I could go on and on about specific moments but what really stands out is just the consistency of the show’s visual spectacle. Perhaps most importantly, the flames that are so much the focus of the show are largely hand animated.  There’s such a richness to their movement I’d almost go as far as call the fire a cast member in its own right. Overall, Fire Force is definitely some of the best in its class of Shounen action.

As for the show itself, I think Fire Force will be my new go to example of how much a good adaptation can improve shoddy source material. I wouldn’t call myself a fan of the original manga, in fact I stopped reading it after it largely failed to impress me with its flat characters and generic presentation. Comparatively, Fire Force the anime is so aesthetically impressive that it goes a long way to help paper over the show’s less compelling elements. To put it another way, the Fire Force anime hasn’t convinced me to go back to the manga, but it sure as hell has me excited for the next episode. Of course time will tell if those visuals will be enough to carry us through its less exciting moments, but for now, I’m more than willing to let it try and convince me.