Kohinata Mangetsu is a regular high school student with a cheery attitude. However, one night when the full moon is out, she finds herself transported to another dimension where magic girls fight in a battle royale with mecha called Armanox. The prize? The inheritance of all the world’s magic, which was sealed away 1000 years ago. Kohinata is now in possession of her own Armanox, finds herself thrown into the fray.

Gee’s verdict: This Soul Gem Of Mine Burns With An Awesome Power

Right from the get go, Granbelm does a lot of things right to leave a solid first impression. Despite its cutesy aesthetic sensibilities, Granbelm has all the true makings of a mecha anime. It doesn’t drag its feet introducing its characters, the setting, and the central conflict, allowing the first episode to focus on what really matters; nice looking robot fighting. Whoever is working on this show must be fans of the genre, because the fights in Granbelm rely on some of its best tropes. Big powerful attacks, hot blooded screaming, eyes flashing right before impact, it’s all here and executed quite effectively and in 2D to boot! It’s a breath of fresh(?) air as a long ailing mecha fan and I hope the show manages to keep it up.

As for the character and story, it all seems pretty by the numbers so far. Lots of magic girl tropes at play here, but so far I’d say what we’ve seen so far is at least entertaining enough to keep me interested. If nothing else, a magical battle royale fought with giant robots certainly isn’t the worst place to start. That said, I suspect the spectacle of this episode is something we won’t be seeing for a while. After all, animating big flashy robot fights is quite expensive. As a result, I can only hope the characters are interesting enough to sustain the moments when they aren’t screaming their lungs out and slicing oceans in half with laser swords. Still, as far as introductions go, Granbelm’s has succeeded in capturing my attention. I look forward to seeing where things go from here. 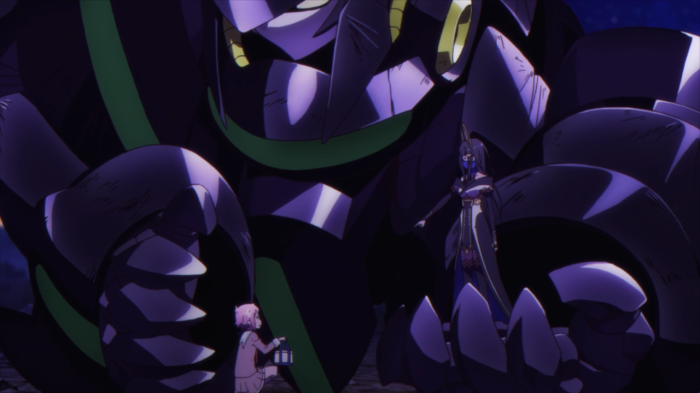 Magical girls having a battle royale in another dimension with mecha? I mean, sure, I guess. Main writer Jukki Hanada has a resume that varies wildly between extremely good (A Place Further Than the Universe) and utterly insipid (Love Live), and I’d say Nexus is unproven as a studio, so it’s really a toss-up as to how this turns out. There wasn’t anything that was an immediate turnoff within the first episode, at least. In fact, I’d say Granbelm put its best foot forward: the majority of the premiere is mech battles, and while the SD designs are a little iffy, the action is solid (it’s even 2D!) and gleefully leans into the super robot tropes that you’d want out of something like this. While I’m wary that the plot development that battles take place during the full moon potentially means we’re only going to get action every 3-4 weeks, so far I’m cautiously optimistic about Granbelm. It could be our dark horse this season.

One thought on “First Look: Granbelm”