Jotaro Aragaki is a 29-year-old widower and father who has devoted his life to gymnastics but is now staring down the barrel of retirement, having performed poorly over recent years as he battles both aging and a persistent shoulder injury. However, he’s loathe to tell this to his daughter, and a chance encounter with a foreigner ninja (and a group of mysterious ‘agents’ hot on said ninja’s tail) are about to change the course of Jotaro’s life. 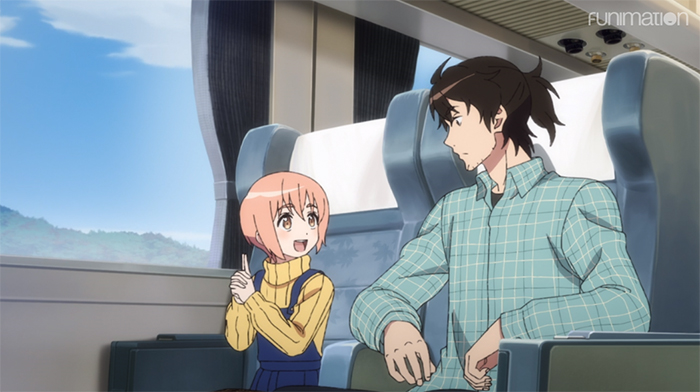 It’s been a whole day, and I’m still in two minds about Taiso Samurai. I didn’t read too much about the title going in, but I knew it was an anime original being produced by MAPPA and featuring a professional gymnast as the main character – despite having none of the same staff, the parallels between this and Yuri on Ice, at least on paper, were easy to draw. And I must admit, as much as I truly love Yuri on Ice, I was rooting for Taiso Samurai to carve out its own unique identity. Based on the first episode, I’d say it’s certainly done that. The question is, did it did so in a good way?

I’m honestly still trying to make up my mind about that. On the one hand, there’s no doubt about Taiso Samurai bringing something completely different to the table. When was the last time you saw an anime about an aging pro-gymnast, who’s also a single dad, who’s also kinda being stalked by a foreign ninja, who himself is being stalked by a bunch of apparent secret agents? Oh, and the main character’s daughter, apart from being a) cute as all hell and b) pretty dang mature for her age, has a pet… uh, giant mutant parrot or something. And the mother-in-law looks and acts like some kind of cross between an Osaka obachan and a real estate mogul. Did I miss anything? Very likely – there’s a lot to unpack here, making the premiere not only fun and lively but also more than a little thematically chaotic, with little in the way of breathing room.

The downside to this is that I felt like I had little chance to react emotionally. I appreciate the fact that Taiso Samurai doesn’t let itself get weighed down by the (very understandable) angst of a gymnast facing a steady downhill performance, injury, and retirement, but every time I was ready to really relate to the guy, the show turns one of his lines into a comedy moment or, I don’t know, introduces some kind of gigantic tropical pet bird. I paused the episode at least twice that I remember, just so I could mutter a quick “What in the hell?” to myself before resuming. The second, less important but still obvious issue with the series is that it’s clearly facing budget restrictions. The opening CG looked incredibly awkward and out of place, there were a lot of still frames throughout the episode, and the artwork itself, while okay-looking, lacks any kind of oomph factor. I won’t get hung up on this, but I suspect a lot of other viewers might, especially if they were anticipating something more similar to Yuri.

On the whole, Taiso Samurai is an interesting beast, and while I’m definitely not sold on the series, I’m happy to continue watching to see just where it decides to go.

I very much like seeing stories about adults in anime, particularly ones that are past high school and college age. Our protagonist Jotaro is at a particular time in your life around your late 20’s when you start closing the first chapter of your adulthood and figuring out what you want to do next. That applies to pretty much everyone, even if you aren’t a world class professional athlete. There’s a lot of thematic territory to explore there, especially since Shotaro is a single dad.

Unfortunately I feel like the execution of this episode undermined all that. First up is the weird and silly comedy bits, like the bizarre pet bird or Jotaro’s potential understudy posing as a ninja. Added to a show that otherwise feels very down to Earth, I don’t think those elements added anything. Second, the adults are all REALLY dumb. I was getting extremely frustrated at the episode getting artificially extended because no one knows how to talk or listen. Plot events based around poor communication feel like lazy writing.

My biggest concern though is the ending, in which Shotaro decides not to retire at the last minute. I feel like it would have been a more interesting story if he did retire and had to deal with adjusting to it. I also feel like his decision (or any of his actions) are taking into account his daughter’s feelings, which reinforces my previous statement that the adults in this show are idiots… OK except Grandma, she’s real cool. For everyone else though, I don’t think I have the patience.