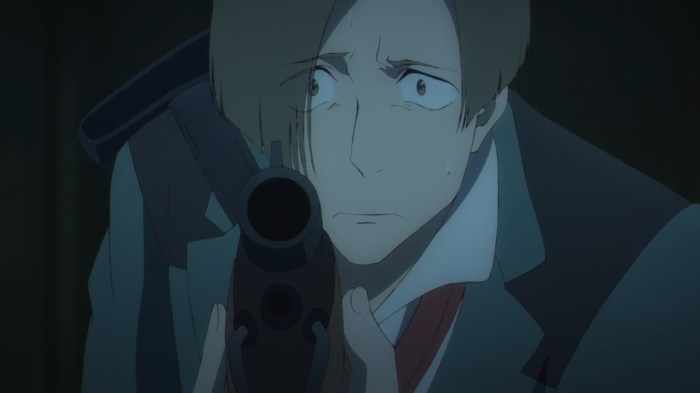 “From Gutheil With Love”, “Rogue Infiltration”

After checking back in with HQ, Headkeeper moves back into the Imperial Capital to extract their spies and find out what exactly the Empire has been hiding.

We’ve finally managed to get away from the capital and into Gutheil… so it’s time to head right back to the capital! I feel like the show is starting to struggle to keep its plot on track, honestly. There are still some of the interesting elements that drew me to the first couple of episodes in the first place, but some of the reveals and twists in these episodes make it all seem like it’s going to become a much more conventional show.

We start with a sort of extended test to see if Innumael is going to stick with Headkeeper even though they have successfully smuggled him out of immediate danger. Since he’s the protagonist, of course the answer is yes, but we do spend a weird amount of time and energy on it. Not helping matters is the local branch chief, who is a hair’s breadth away from being a predatory gay stereotype. One day, we won’t have to deal with this character, but today is not that day. 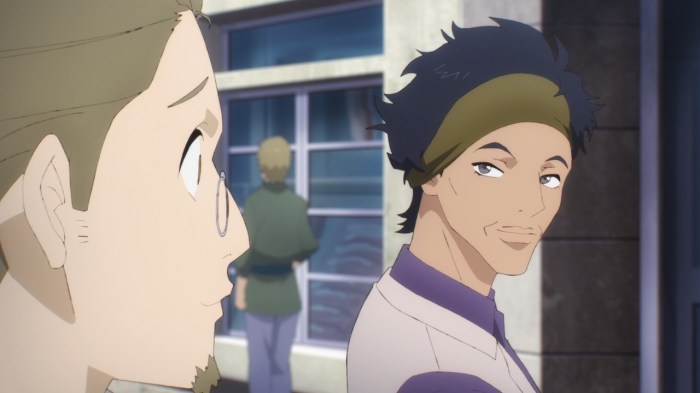 It’s some classic “hidden test of character” stuff, though it continues to stand out because we’re halfway through the show and Headkeeper has consistently been portrayed as the more moralistic and compassionate organization compared to the Empire. Leocadio’s most ethical actions have been… saying torture is bad and apologizing to an innocent girl after arresting her. Neither of these have any tangible impact, or really any personal consequences. Meanwhile Innumael is (to his knowledge) risking getting on a criminal’s bad side to make sure a child isn’t abused. He’s returning to the capital as a wanted man, risking his life to help the people who helped him. He’ll cry and tremble and freak out about it, but he’s putting his proverbial money where it counts.

Schaake gets her own little subplot about her noble status, and it’s the most direct emotion she’s shown in the show so far. It’s pretty clearly implied both that Schaake’s mother was involved with the Grape Kool Aid Experiments and that she somehow died in the line of duty, which more or less lines up with what has been revealed so far. Schaake’s relationship with her father is portrayed well, I think: they’re pretty frosty with each other, but he isn’t a complete fool (he knows she’s a criminal, for instance) and clearly cares about her. It’s too bad she’s stuck in the mansion. 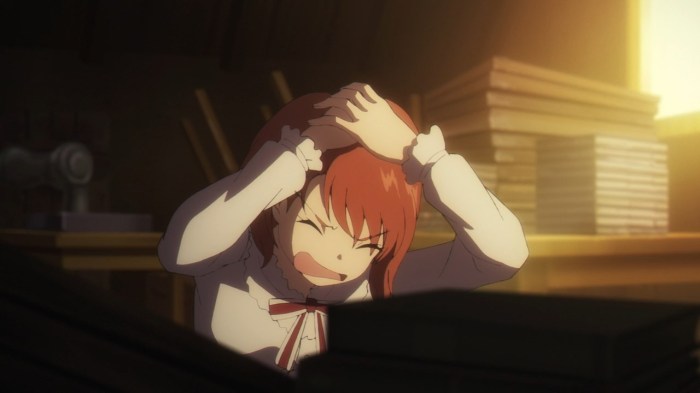 As noted, everyone minus Schaake heads straight back to the capital to save Elfriede, aka Lady Spy. There are some surprisingly fun urban shenanigans to be had during this sequence as Arnold and Ben sneak into the lab while Innumael and Irma (who is another Character-Obviously-From-The-Game) scope out the rest of the city. Innumael once again shows a bizarre willingness to put himself in direct danger here, running interference while being chased by the cops.

Unfortunately, I feel like the cracks start to show around here. Creepy Anime Doctor pushes the “release all the monsters!” button, sending a bunch of abominations out onto the fucking city streets. The animation takes a noticeable hit during what should probably be a cool sequence of action and fighting scenes. It turns out Elfriede, after being captured, was also experimented upon and turned into a monster. Of the two major female characters who were in this show from the first episode, one has been written out and another is now effectively dead.

I understand we’re only halfway through the show, but I have a lot of questions regarding the plot at this point, and they aren’t all good ones. Let’s sum up: it’s pretty clear that the Empire is doing human experiments with Coldfire and Luminosis. A byproduct of these experiments is the creation of monsters and mutants. At the same time, an increase of monsters and mutants in the wildnerness (hmm) has caused an increase in demand of heavy weapons among rural communities. However, these have been outlawed by the government with the reasoning that “anti-Imperialists” might get their hands on The Guns, and we can’t have that.

In response, Headkeeper emerged as an organization to smuggle weapons and other goods to those who need them. Except they’re also smuggling the Grape Kool Aid, which is obviously involved with the Mutant Experiments and has been shown to cause magic nuclear meltdowns. Shady business! Except it’s also been revealed that at its highest level, Headkeeper is being funded and run by the government itself, as a false flag for rooting out “anti-Imperial sympathizers”. They’re literally releasing monsters out onto the streets of the capital, presumably so they can claim it was Headkeeper’s doing and crack down even harder.

What am I supposed to gather from this? It seems clear that the Empire are the baddies. But the show’s framing – regardless of the content – seems hell-bent on making the resident Imperial representative Leocadio out to be a Good Person Despite It All. It’s only his bosses like Commander Helman and Diet Member Mary Bult who are bad, right? And look, Headkeeper must be just as bad, if they’re willing to deal in Grape Kool Aid! Especially considering context from the game (which I noted a few weeks ago), I’m baffled that I’m apparently supposed to consider the Empire and Headkeeper on equal terms, let alone Leo just as much of a protagonist as Innumael. As things stand, I don’t see how Magatsu will try to resolve this conundrum.