(Programming Note: Episode 1 and 2 were released simultaneously, we watched both for this review)

If you watch enough anime and read about a new show starring a singing idol AI robot, your brain automatically goes certain places. But after watching all the death and destruction within the first minute of Vivy, it becomes immediately clear this is not a vocaloid spin-off or even an idol show. This is a deadly serious time-traveling, sci-fi thriller and if these first episodes are any indication, it seems pretty good?

Time traveling to stop the robot apocalypse is not a new concept, but Vivy puts in the work to build its own character. My favorite scene is the main character, nicknamed “Diva”, sitting down and trying to “eat” with a little girl. Apparently at this point in the future humans eat by spraying food in their mouth, so the little girl sprays it in puffs and tries to catch it in her mouth, as a little girl would if boring spray can food existed. Diva tries to imitate her, despite not needing to eat. While Vivy still has its share of flat info dumping, it also has moments like this that tell you a lot about this world without needing to explain it.

I also liked how Diva and Matsumoto, the future AI sent to contact her, have a complex relationship. They do a good job of having them act like something between humans and robots, which leads to some, shall we say, “ethical conflicts”. You want to believe Matsumoto’s methods are correct but it’s not that simple. I don’t want to spoil anything else, but it’s an ambitious start that has me cautiously optimistic about the future of the story.

Of course there are plenty of ways Vivy can go wrong over the span of the series, and these first two episodes were not perfect. As I mentioned there was a fair amount of info dumping, and the premise is not terribly original in itself. I’m also a little concerned about the production, which had some inconsistent quality. Sometimes it looks fantastic, other times not so much. But I would say the good far outweighed the bad, and there is enough potential to keep me hooked for a few more episodes. 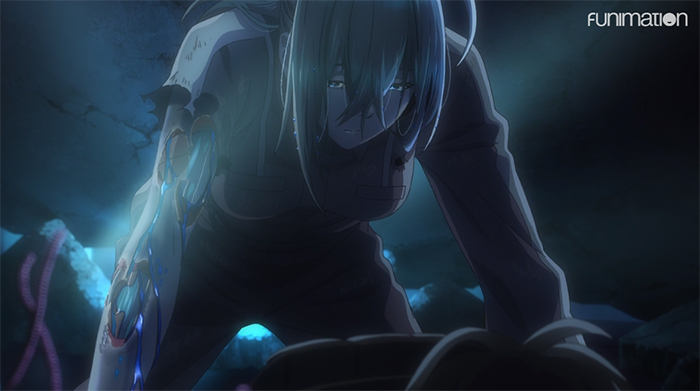 I’m glad I didn’t know anything about this show before going in – it made my initial surprise at this not being an idol show that much more pleasant (as well as my initial jolt at the opening scene that much more attention-grabbing). Also, this premiere was a double-episode, and typically, those do not tend to go well for me as far as first impressions are concerned (i.e. a ton of terrible exposition and just plain old bad writing). Moreover, finding out only after watching that Vivy is directed by the same guy behind Guilty Crown and parts of Attack on Titan can in my case only be a good thing, since I’m not sure I would have wanted to check out the show at all otherwise.

Anyway, credit where it’s due, this grabbed my interest right from the get-go. Granted, “saving the world from A.I.s gone rogue” isn’t exactly a new concept, but both of these episodes were executed with enough flair that I’m genuinely intrigued to see where things go, even if the storytelling got a bit messier during the final minute or so of episode 2. Overall, the pacing felt pretty tight despite the occasional instances of info-dumping, and the violence, while definitely explicit, didn’t stray into purely shock value territory for me.

On the production value side of things, the voice acting really stood out to me. Both main characters are voiced by extremely talented veterans who clearly know exactly what they’re doing, even if the character designs themselves are weirdly ‘meh’ for me… at least for all the shots that aren’t extreme close-ups, which is when we see a completely different art style with a lot more captivating detail. On the whole, I see plenty of potential here, so at the moment, I’m feeling cautiously optimistic about what may be around the corner for this series.