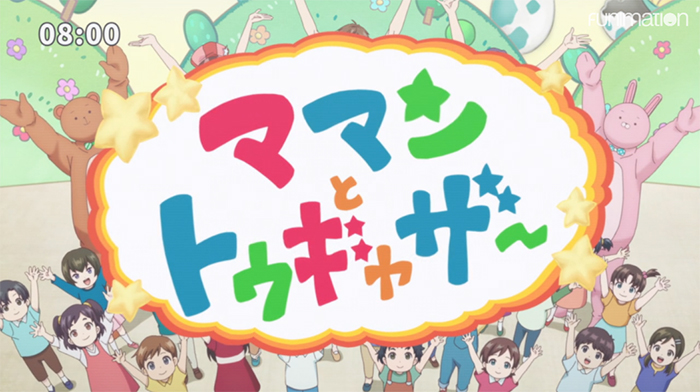 Uramichi Omota is a former gymnast who is currently employed as the star of a popular children’s television show. He’s extremely unhappy with his life, and it’s starting to affect his work.

I’ve been complaining about the lack of good anime comedies the past few seasons, so I had my eye on this one. It has a great premise. Mixing the unrelenting cheerfulness of a children’s morning show with Thirty-something millennial angst is the perfect formula for some unsettling, black humor. The writers of Uramichi Oniisan understand this, but unfortunately they have no clue how to make it work.

First of all, let me say this Uramichi guy should have been fired multiple times in just this episode alone. I did not expect him to openly divulge his feelings of resentment and resignation in front of the kids, and yet that’s like 70% of the episode. It’s just Uramichi telling the kids how much he hates his life while trying to smile. I’m sure it’s an attempt at being funny, but it comes off as very unfunny statements of fact. The other 30% is Uramichi’s equally unhappy colleagues doing the same thing, with the same unfunny results.

We also get a few quiet, pensive moments that I think are supposed to be serious, which I’m not necessarily opposed to. But I think those fall flat when you don’t have the strong comedy to contrast them with. I’d be interested to see this material in the hands of a director like Yoichi Fujita (Mr. Osomatsu, GLORIO cult favorites Binbougami Ga! and Classicaloid, Gintama I guess…) who handles that mix better than anyone. Unfortunately though, I think this material would be doomed regardless of who was adapting it. And so sadly, the anime comedy drought continues…

On paper, this is the kind of show that would normally be right up my alley – full of adult humor that’s nonetheless focused more on the ultra-jaded characters and their point of view working in the entertainment industry than on purely crass or slapstick comedy centered around b00bs and general fanservice. (And given the studio behind this – whose most famous anime title to date is Ro-Kyu-Bu! – that’s probably a feat in and of itself.) However, the biggest problem with Uramichi Oniisan isn’t its premise; it’s that any joke, no matter how good, will eventually get tiresome if it’s repeated enough.

Even then, the first episode of Uramichi Oniisan could have been pretty fun if it had really nailed its delivery. However, although I’ve happily watched plenty of titles before made up of numerous short skits involving cynical or otherwise adult-style humor of the “Yup, this is the actual reality of the situation” variety, this show simply lacks the ‘oomph’ factor that would make said jokes land properly. I blame the direction for this – if Uramichi Oniisan was helmed by someone like Shinbo Akiyuki (Sayonara Zetsubou-Sensei), or even a slightly gentler touch like Kawatsura Shinya (Non Non Biyori, Tanaka-kun wa Itsumo Kedaruge), I would’ve likely been much more engaged. As far as this first episode goes though, most of the punchlines seemed to write themselves to the extent where they either became incredibly predictable, and/or never quite went anywhere at all beyond pointing right back to the premise and going “Ha-ha, isn’t this hilarious?” That’s not even a joke so much as it is a raw concept idea, which in turn makes the show feel lazy, as it means that both the story and the character development is more or less non-existent.

Is this the worst thing I’ll probably be trying out this season? Far from it – but unfortunately, a solid concept will always fail without the execution to back it up, and I just don’t think Uramichi Oniisan has the comedic chops to pull off anything that it hasn’t already presented in its premiere.