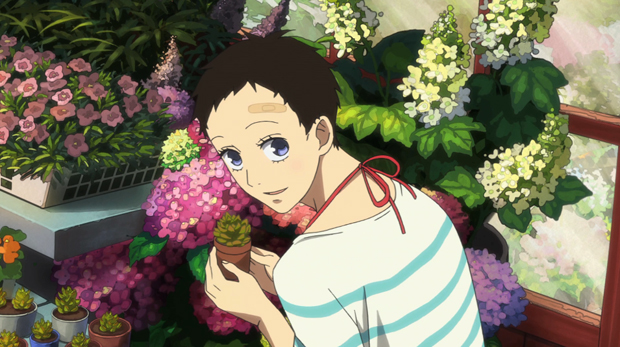 Premise
An ACTUAL ADULT man finds himself falling for an ACTUAL ADULT woman who owns a flower shop. Their relationship is impeded by the ghost of her dead husband in this story about ACTUAL ADULTS.

Jel’s Thoughts
After grinding my teeth at how painfully impotent the main dude was acting in the first half, Natsuyuki kind of pulled itself together in the second. Without spoiling it, they do make more progress than I was expecting. Still, I was incredibly annoyed by the main character who had absolutely no reason to not pursue a relationship with this woman and yet found himself moping around about it. It’s one thing if it was the usual awkward teenage protagonist we’re used to but they are trying to so hard to make sure you know he’s an adult (HEY GUYS HE SMOKES, HE IS A MAN) that there’s just no excuse. At least the ghost guy was fun.

Verdict? Growing Frustration
Joking aside, I really do want to like this as there are so few anime starring characters past high school age. But I can’t shake the feeling it’s the type of show that will just frustrate me with an agonizingly indecisive cast. Hopefully I’m wrong and it will turn into a beautiful story about a woman coping with the death of her husband and learning to love again. Let me know if it does.

Lifesong’s Thoughts
This lead character is a creeper. Falling madly in love with someone who’s name you don’t even know is something for 12 year olds not grown men. How ironic that mental age of this man feels lower than the average mental age of most middleshool girls in a schoolgirl anime. But hey I’m not in the target audience so maybe I’m just missing the appeal.

Verdict? Bed Of Thorns
No roses to be found here, at least not for me. The dead husband is the only interesting character I see here and I can’t see him carrying this for me. A moody 12 year old boy in the shell of a man is just not something I have any desire to watch.

Irothtin’s Thoughts
Boring dude has a crush on boring woman and has to deal with the boring ghost of her boring husband.

Verdict? Slow
I think that people who really liked Kimi ni Todoke would like this, but I was falling asleep halfway through.

Marlin’s Thoughts
I suppose you can say I’m a romantic at heart. I’ve always loved mushy romance stories and Josei titles like Nodame Cantabile continue to be in my top favorites. I honestly think this was a great opening episode. I find the dynamic between the spirit of Atsushi and Ryuusuke really clever, with Atsushi doing what I’d wager anyone would do if they found themselves a possessive ghost. Ryuusuke is an interesting protagonist too, very much a cynic in love, he came off as very real to me. When he believed he was being denied, he accepted it, he understands that his affections are still only superficial and that his methods to try and worm his way into Rokka’s heart are more than a little duplicitous. With Ryuusuke’s boldness near the end of this first episode, I was hooked.

Verdict? Not Giving Up the Ghost
I think this show could have a lot of potential as a mature romance story. What can I say? I’m a sucker for Josei.