Recap: Atsushi is driven by some force to bury his past, and reveals the truth to Rokka in his actions. Meanwhile, Ryousuke is still stuck in the picturescape, and might get stuck there for good.

Episode 8
This episode really didn’t do a lot for me. It was mostly a transitional episode, building up to the climax of this possession story. Atsushi runs away in Ryousuke’s body in an attempt to bury his past. I really wish more was told about this particular plant and why it’s so important. All these scenes in this episode seem kinda unnecessary and could have been told much quicker.

It seems the main vehicle of this episode was to explain more about the picturescape. It appears Hazuki has started losing himself in his memories, and thus is in grave danger of trapping himself in this world for good. The picture-Rokka only does so much to help him before just leaving, just making the whole picturescape even more confusing. If the “prince” used to be there, does that mean Atsushi’s ghost comes from the book? He never seems to talk about it and the reason as to why this is the particular thing Hazuki’s being has been bound to still isn’t explained. I’ll just take small solace in that this has to be a buildup for something more next episode. 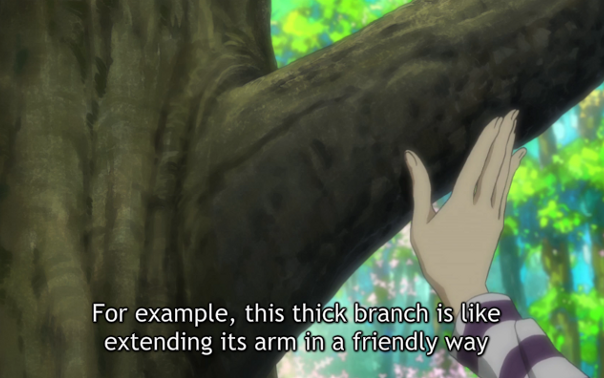 This show uses flashbacks a lot to tell us things about the life of Rokka and Atsushi. For a while I really dreaded these scenes as except for the memories of the amusement park, I never really saw them as being terribly important. Thankfully, these memories actually served to reveal a plot point instead of Rokka seeming to go into mindless nostalgia for the sake of it.

Back in the picturescape, I’m just left even more confused. For one, are we to assume Ryousuke is the seventh dwarf? Otherwise I really need to have a word with whoever wrote this on proper use of fairy tales. Second, the Picture-Rokka never was this cruel to him, just straightforward. Why now does she seem to tease him and mess with his head? The last scene in the picturescape I can only explain as a switching of roles. As Atsushi is becoming recognized as Ryousuke in body, slowly Ryousuke will become Atsushi in his spirit, and eventually it will never be able to change back. 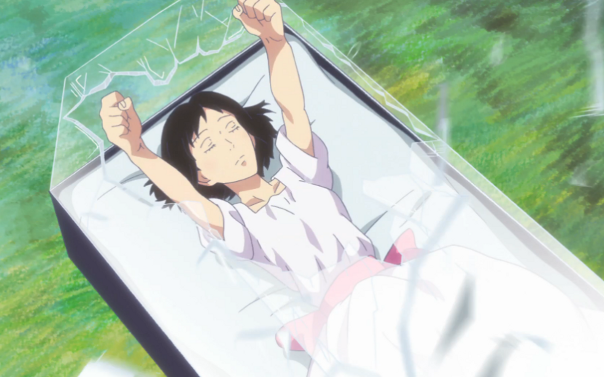 The scene of her realization was a major payoff to me. I’m a perpetual sucker for mushy stuff so the tearful reunion really struck a chord with me. Having this revealed to her really just brings more problems to the table, though. If Ryousuke can ever come back, how will Rokka ever be able to love him, knowing that she only seemed to truly fall in love with him after experiencing her husband through him. If Ryousuke never returns, will Atsushi never feel guilty for stealing his life for the sake of their old love? I suppose there’s no guarantee on how events are to go, but in a typical story, Ryousuke will get his life back. I really can’t see a happy ending out of this story. However, perhaps that is the point, that not every love story really has a perfect ending, and there will always be disappointment in life.