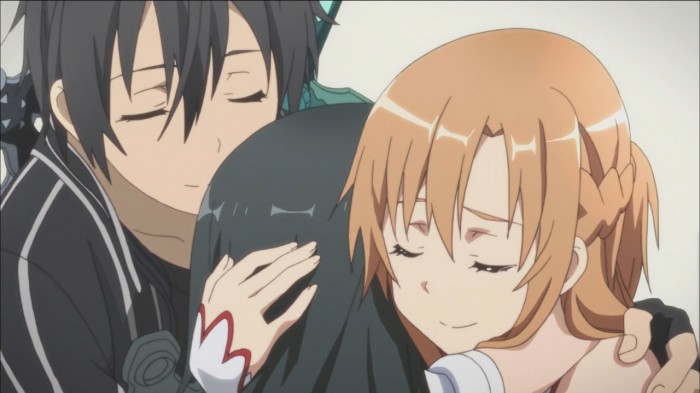 Recap: Kirito and Asuna enter a bonus dungeon to save the leader of The Army, with Yui in tow.

Iro’s Thoughts:
Essentially abandoning the driving mystery of last episode, the plot shifts to a rescue mission. The vice-commander of the Army shows up at the church’s doorstep, explaining that Kibaou (the jackass from the second episode) is the one behind the Army being such jerks lately, and asking Kirito and Asuna to delve into the bonus dungeon on the first floor to rescue Thinker, the actual guild leader. Of course, they comply, bringing Yui along for no adequate reason.

Long story short, while they save Thinker, they get ambushed by a bonus boss in the process. Yui saves them, revealed as an AI built into the game to help the players with psychological counseling, and therefore possessing the Admin privileges necessary to delete the boss from existence. Originally disabled so Kayaba Akihiko’s social experiment could proceed without a hitch, she somehow developed sentience and sought out Kirito and Asuna because they are apparently the only happy players in the entire game. 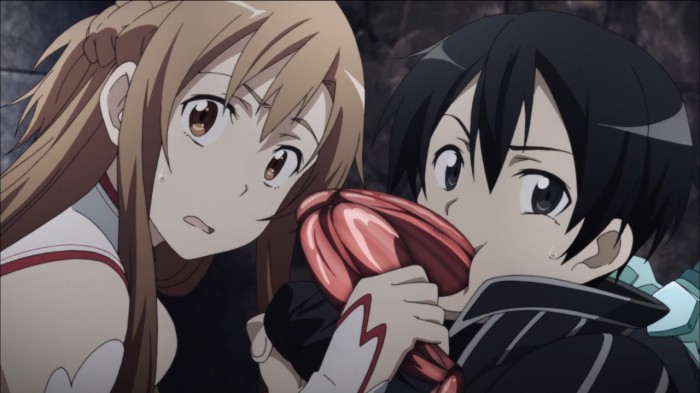 The system tries to delete Yui because she’s gone rogue, but Kirito somehow hacks the GM console and stores her data in his NervGear’s local memory, promising Asuna that they’ll revive their “daughter” one day. Hugs and butterflies all around.

As for cuts, the only real difference this episode was a few lines from Yulier, when she is explaining the Army’s original goals. They started out under the guild name “MTD” , or “MMO Today”. As Kirito explains, they are the largest MMO information website in Japan in the Sword Art Online world.

My main gripe here is that it really feels like two different plots were just stitched together (and the novel felt this way somewhat too) – the cliffhanger from last week over Yui’s behavior was just brushed off, and everyone shifts their attention to Thinker’s rescue mission. Of course, it still leads them to the answer, but it also ends up feeling somewhat contrived. I think they would have worked better as two separate plot threads: an action episode of entering this new bonus dungeon to rescue a missing player, and a slower arc about this mysterious girl. Since Yui was specifically built to monitor mental states, if this arc perhaps had more to do with how players on the first floor (especially the children Sasha looks after) have been coping with the game for two years, I think it could have been more interesting and more emotional.

Dragonzigg’s Thoughts:
I was bitterly disappointed with this episode, which does multiple things to get badly on my nerves. Iro always hates when I harp on about the ‘show don’t tell’ rule but I still think it’s a good one to stand by, and it’s difficult to disguise this episode is basically two massive infodumps at the beginning and end with some sub-par action in the middle. Asuna and Kirito’s decision not only to believe Yui’s entirely unjustified assessment of character, but then to take her into a place they know is an incredibly dangerous high level dungeon.is baffling beyond belief. It’s always a bad sign when you can see the cogs and gears of the story grinding away, but that’s true multiple times this episode. Why do the party, having found Thinker, not just leg it into the end zone and teleport the hell out of there? Because the plot says so of course!

The other thing which really got my goat about this episode is the shamelessly blatant attempt at emotional manipulation which basically makes up the entire last third of the episode. They bring it all out – the tears, the sad backstory, the dissolving into golden light. The problem is, I just don’t care enough about Yui. The idea that she’s some sort of mental healthcare AI seems to push the bounds of credibility at the least. If she was prevented from going to help the players two years ago, why is she suddenly free to roam now? Why does she suddenly regain her memories? Yui has been in the show for so little time time that it’s difficult to feel much empathy for a character whose sum total of personality has been clinging at Kirito and Asuna and making googly eyes at the audience. While the show might be aiming to shock and move the audience with this apparent death, it lacks even the courage to go through with it wholeheartedly. They’re trying to have their cake and eat it, presenting us with a big ‘final’ scene while still ensuring  there’s a convenient excuse for Yui to reappear at a later date, as she no doubt will. 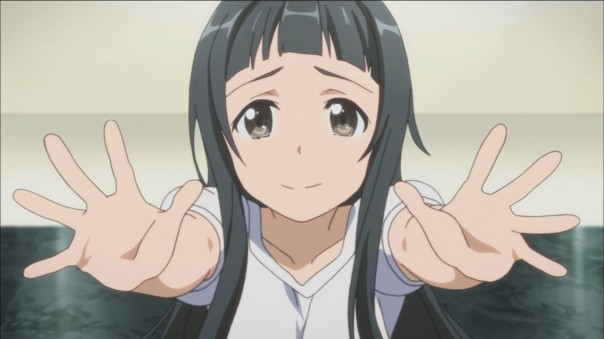 Speaking of Kirito and Asuna, the show already treads a fine line with making them messianic figures, but painting them as literally beacons of love and joy steps way over the line.  After two years, it’s totally plausible that other people have settled into established, fulfilling  lives and this is clearly just another attempt to make us revel in the shining pureness of our lead couple. Good stories require a certain amount of conflict or adversity to drive them, and there’s little of that where these two are concerned, at least at the moment. Elsewhere, my issues with the show remain – the ridiculous amount of MMO-babble serves to leech any possible genuine emotion out of  the dialogue and there’s little here that wouldn’t work in a well realized genuine fantasy setting. The show does continue to look great however, and I really liked the transition from dungeon corridor to star dappled walkway – a really nice touch of style there.

This conclusion would have been a lot stronger if we’d known Yui longer and understood her better as a character (and it’s here that the obvious limitations of the light novel adaptation come to the fore). As it is, this entire arc comes out half cocked. Let’s hope SAO can return to its core strengths and learn a more nuanced style of character development in episodes to come. 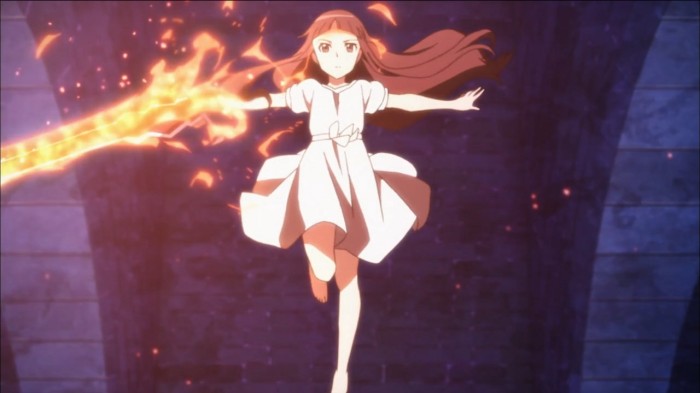