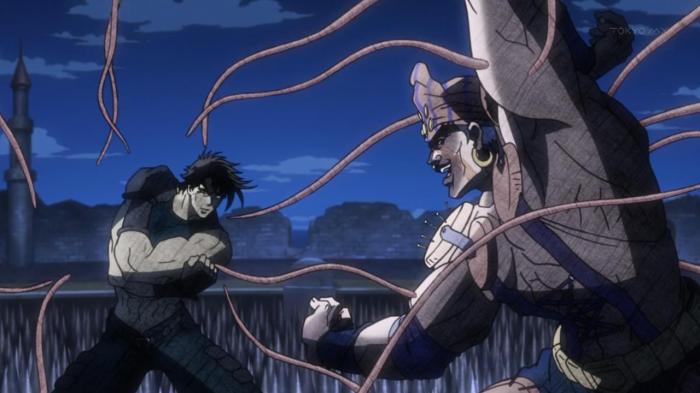 Recap: Jojo’s final exam for Ripple training becomes a fight to the death with ACDC.

Iro’s Thoughts:
This week, we get to see Jojo’s training pay off as he battles ACDC, though we start off with a flashback of sorts to sort out the motives of the Pillar Men. Cars created the stone mask, but even with its arcane powers, it isn’t strong enough to… “upgrade” the Pillar Men. They need the Red Stone of Asia to create a supercharged stone mask, so they can become THE ULTIMATE LIFE FORM (and we aren’t talking about Shadow the Hedgehog here). Conveniently for our storytelling purposes, Lisa Lisa has that very stone, keeping it safe as the current master of the Ripple and claiming it will be instrumental in winning the coming conflict.

At any rate, battle ensues in Lisa Lisa’s weird spiked death arena thing, since our villains are actually being relatively smart about looking for the red stone. ACDC’s special ancient Aztec superpower is the ability to heat his blood and shoot it into dudes with his prehensile veins, and as we’ve come to expect from him, Jojo fights with his silly sleight of hand tricks. Our hero pulls feats of dexterity that no normal human (save maybe Apollo Robbins) could possibly manage, undoing his wool cap and making a complicated web of string on the spikes below his feet. But, even as his body is consumed by the Ripple, ACDC somehow attaches his brain (???) to Joseph’s back, remaining undetected… DUN DUN DUNNNN!!! 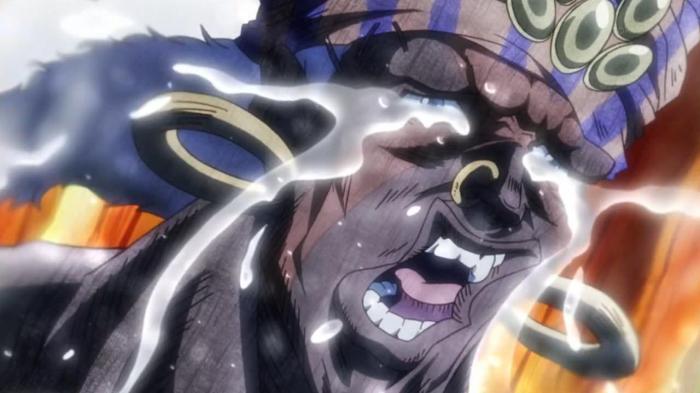 Zigg’s Thoughts:
This episode was a highly enjoyable return to form for JoJo after a few somewhat lackluster episodes, and it’s no coincidence the show gets back to it’s best in an epic one on one confrontation. Though Lisa Lisa and Caesar pop up extremely briefly, this week is really all about the showdown between JoJo and ACDC, a showdown which thankfully cranks up the silly and supernatural from the rather underwhelming encounter with Wham.

What does it do so right?  After all, it’s still affected by the chronic lack of action which seems to haven gotten worse and worse as the show has gotten on. The thing that happens here that the Wham fight didn’t have though is the fantastically crazy imagination and rakish sense of style. Thus, the fight happens on a pit of spikes, just because.  ACDC too is a far, far more entertaining adversary. His quite frankly ridiculous ability to pour burning blood from his veins is over the top in exactly the right way – it’s dangerous enough to be a legitimate threat, but also so dumb it’s extremely enjoyable just to wonder about how exactly does that work?  His mass of tentacle veins protruding from his fingernails and toenails also adds a nice touch of ghoulish horror to proceedings, again something the Wham fight conspicuously lacked. Taken as a whole, it’s a striking visual, which helps compensate for the obvious lack of actual movement.

In terms of overall plot, we do get some pretty decent advancement this week as well. The reason for the creation of the Stone Masks is revealed, as is the ultimate goal of the Pillar Men, and both are pretty good justifications, adding a cool ‘mad scientist’ vibe to Cars. The fact that the Red Stone of  Asia is already in the possession of Lisa Lisa however seems a bit of a lazy storytelling coincidence, and while future events might yet prove me wrong, her reason for not just destroying it seems laughably flimsy and purely in service of keeping the plot thread going.

One last thing I want to commend this week is the ending, which was great. While JoJo’s dialogue makes it pretty obvious ACDC is not gone for good, the reveal, and the sheer dumbness of his chosen survival method is so funny and surprising that it makes for an excellent cliffhanger. A great show ends every episode with you wanting more, and that’s exactly how I felt after this one. Let’s hope things continue to ramp up.