Recap: Jojo and company manage to drive back Cars and regroup, but Caesar decides to press the attack by himself.

Iro’s Thoughts:
Continuing off last week’s cliffhanger, this week jumps straight into a ludicrous fight between cyborg-Stroheim and Cars. Our favorite Nazi was rebuilt with data gained from the battle with Santana, making him strong enough to defeat the Pillar Men, right? Unfortunately, as Cars is quick to remind us, Santana was pretty much a little bitch compared to him and Wham. Not even Stroheim’s deliciously hammy dialogue is enough to win – a surprise victory becomes a hilarious fail as Cars dismantles the Major with hardly any effort. Joseph has to pick up the slack and prevent Cars from taking the Red Stone of Asia, which he only barely manages with timely help from Caesar. 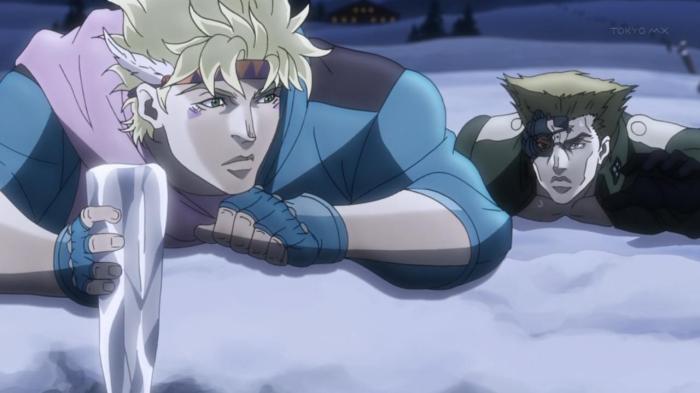 This sequence illustrates some of the big issues in JJBA, both in the source material and in the adaptation. Time dilation seems to plague all battle shows, but JJBA’s propensity for long-winded explanations makes it an exceptional victim. Just like in episode 3, we spend five minutes real time in a sequence that takes maybe 30 seconds tops in-context, with entire conversations taking place in mid-air. The other big issue here is that side characters rarely get to do anything in this series; all too often they are just stepping stones for the current arc’s Jojo. What should have been a crowning moment for Stroheim is instead a farce as he fails to do anything of value, actually making things worse for our heroes and leaving Joseph to clean up the mess. Add all of that onto JJBA’s typical issues with production quality, and the episode ends up as somewhat disappointing. 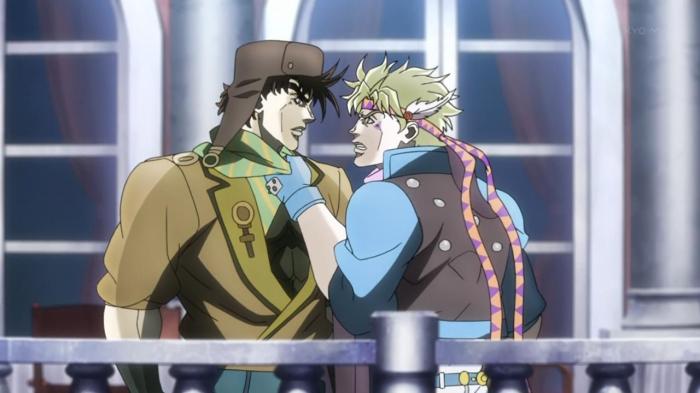 We lead out of the episode with Caesar suddenly overcome with emotion. With the progenitors of the Zeppeli clan’s feud with the stone mask within striking distance, he refuses to take a tactical approach, instead heading straight into the belly of the beast. Expect some flashbacks next week as Lisa Lisa relates his tragic backstory, and some action as Wham enters the scene.

Zigg’s Thoughts:
This was a  supremely enjoyable episode, though it must be said that it frontloads all of the best stuff. And by ‘the best stuff’ I mean Stroheim’s revelation that he’s an elastic limbed, super strong cyborg with a machine gun in his stomach. The revelation of that last fact caused me to do something I haven’t done in a while – pause the show until I had finished laughing my head off. Stroheim’s return re-injects some of the manic energy that has been missing a little since he left the show, and while it makes absolutely no sense, that’s forgivable just for his boasts about GERMAN SCIENCE! being so deliciously hammy. It’s also kind of nice that he *still* gets totally curbstomped by Cars in a magnificently violent way, a constant reminder of the Pillar Men’s still formidable power.

The episode does lose some momentum however, with this week’s second major action setpiece, namely JoJo and Cars’s mad scramble to grab the Red Stone while plummeting off of a cliff. The idea of a mid air battle is pretty thrilling in theory, but the truth is it goes on for a bit too long and the painfully cheap animation strips out much of the motion and dynamism you’d expect from such a sequence. Nevertheless there’s some cleverness here and JoJo and Caesar’s Ripple icicle chain is a pretty inspired way to get out of a pinch, as well as demonstrating the growing co-operation between the two. I’m a little underwhelmed by Cars’s new found position as the head villain – he’s not silly enough to be entertaining and not menacing enough to be scary. he’s just sort of flat and I do hope some effort is made to beef up his character before his inevitable demise.

The ending of this episode is a little odd as well. JoJo taunting the cat is irrationally hilarious to me for some reason, but the subsequent argument with Caesar, while good from a dramatic angle, feels a little weird to me because I feel JoJo’s angle is so totally incorrect. It’s absolutely true Cars has probably boob-trapped the building, but those traps are going to be there whether you attack at night or during the day, so why not just go during the day? In fact, if you’re so sure that that’s Cars’s hideout, why not just dismantle the building and let the light in? Furthermore, as is pointed out, time is a factor – Wham might arrive at any second. We know it’ll turn out JoJo was right, because the show is named after him, but it still feels irrational to me to deny the effectiveness of Caesar’s strategy. In any case, it certainly brings some emotions to the surface, and it seems we’ll get some family history spelled out for us next time round, though I can’t imagine it’ll be an especially complex psychological problem. Perhaps it’ll be solved by hitting things. Or maybe Caesar should seek professional help from GERMAN SCIENCE!