Recap: The stress of the wedding trials is starting to get to Ecarlate, so the group looks to blow off steam with a little karaoke. Icognito gets the same idea when they notice ED has been down about his recent failures.

Jel’s Thoughts: This episode was a hilarious culmination of everything we know about the Ixion cast, with Kon playing the straight man to everyone else’s quirks and fetishes. That may not be much different than what the show usually is, but the return of the Ahoge of Death and the Elements Garden penned character songs made this arguably the funniest episode yet.

Ixion’s humor has always revolved around things that aren’t quite what they appear to be, and having a fun night of karaoke devolve into a torturous living hell was a perfect example. Normally I’d highlight the bits I thought were the funniest, but honestly everything this episode was funny. I was laughing non stop from the moment Kon questioned how Karaoke is even possible in a fantasy setting to the point the episode breaks down into a death metal video with Ecarlate at the mic. I suppose Icognito’s scenes were a bit phoned in, but seeing ED impotently trying to take his turn singing added just the right amount of pathetic to his side of the story. 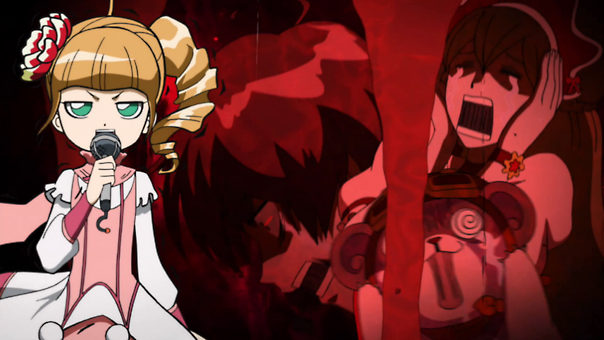 Of course not much happened plot wise this episode, but it looks like we’ll be back into that next week. The previews were hyping up the super creepy notion of Ecarlate (who I remind everyone is EIGHT years old) consummating her marriage. I’m actually kind of surprised they’re skipping that far ahead already, but the more I think about it there’s still quite a bit of ground to cover. With Ixion in top form for this final stretch though, I”m really looking forward to it.