Recap: Dera’s weight has ballooned out of control, causing the girls to take drastic measures to slim him down. This includes bringing him to school to keep him from sneaking food, so Choi decides to tag along.

Jel’s Thoughts: This was a fun episode but ultimately a little disappointing. Last episode left us on a bit of a cliffhanger with Choi picking up on Tamako’s scent, and other than a brief mention our main plot once again gets put on the backburner. I understand they want to show how entrenched Dera and Choi are at this point, but Dera’s training regimen and Choi’s somewhat dubious entry into school life could have easily been the B plot to something else. 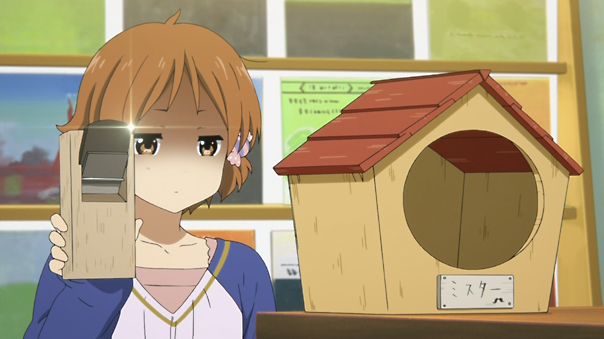 Working with what we got though, this was arguably the best comedy episode yet. Kanna’s slightly off kilter, deadpan personality is a perfect match for Dera’s over the top histrionics, making his struggle to shed a few pounds (or is it ounces?) a lot more entertaining than it might have been otherwise. Add in Stoner Record Coffee Guy’s perfectly timed music and there were some great moments throughout.

Considering the lack of actual content there’s not too much more to say this week. I should mention I found it hard to believe Choi could just waltz into school no questions asked, and her whole segment pretty much felt like an excuse for the creators to play dress up with their new doll. I suppose it’s not really important, but everything else aside from the TALKING BIRD WITH PROJECTOR EYES has been pretty believable, so that seemed like a stretch. Looking ahead it seems Mochizou will finally be working his way back into the plot, so perhaps we’ll get some more romantic teasing for the fangirls to swoon over. I would prefer that over nothing happening at all.

One thought on “Tamako Market Episode 8”