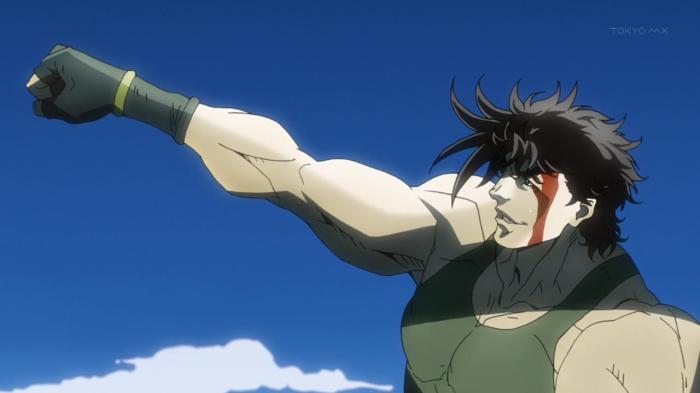 Recap: The true final battle commences at the volcano, and soon enough we jump some years forward…

Iro’s Thoughts:
Hey, remember that throwaway line waaaay back when, where Lisa Lisa said that they can’t destroy the Red Stone because they needed it to win? Turns out they did need it! Realizing that the ripple is the same as sunlight, Joseph uses the Red Stone to amplify Cars’ new supercharged, ultimate-lifeform ripple and trigger a super eruption, blasting Cars into space forever. And just to top it off, they play the Phantom Blood arc’s OP song – Sono Chi no Sadame – right over the best part, making it even better. What better to act as a cross-generational theme song for the Joestar family than the theme song of the very first?

Anyway, Joseph hooks up with Suzi Q and crashes his own funeral, and we get one of those epilogues that talks about what everyone’s gotten up to after the fact. Lisa Lisa remarried, Erina died happy surrounded by her family, Speedwagon died single, Stroheim dies as a soldier, and Smokey becomes mayor I guess. Of course, all of this is arguably just leading into what a lot of us thought was the main feature of this episode: an elderly Joseph Joestar flying to Japan to visit his daughter and grandson, and a shot of a mysterious youth inside a prison cell…

Zigg’s Thoughts:
Mechanically this is a finale it’s pretty easy to pick holes in. But that would be incredibly churlish, given how incredibly funny, silly and just downright entertaining it is. I will admit that I had doubts as to whether JoJo could pull off a finale worthy of the buildup, but this definitely shut me up.

The backstory that this episode opens with is interesting but not exactly essential and you could argue it even damages the pacing a bit. We don’t really need to know Cars has always been a bastard, and showing a whole bunch of Pillar Men reduces the mystery behind our villains a bit. It’s not a total momentum killer, but we’ve come so far the bad guys origin basically doesn’t matter that much at this point. What matters is that of course Cars wasn’t dead in the lava, and he bites back hard, cutting off JoJo’s arm in the process. It’s a pretty great moment that turns the tables drastically and re-establishes Cars’s dominance after a slightly lacklustre performance in the last episode.

Of course, JoJo pulls a last minute save out of nowhere and I’ll give them credit, the idea of the Red Stone acting as a Ripple amplifier makes a fair old bit of sense. The fact it can trigger a volcanic eruption that blasts you into space slightly less so, but who cares when it’s so damn funny. JoJo’s severed arm leaping up to strangle Cars is just the icing on the cake. It’s a clever way to dispatch an immortal, invincible enemy and  being forced to drift through space for all eternity is a pretty horrible fate to condemn Cars to, no less than he deserves.

After that it’s essentially a leisurely stroll to the finish, although one filled with lovely touches (I particularly like Suzie Q’s taunting of a bed-bound JoJo). The ‘where are they now’ montage is ultra corny but of course that’s perfect for JoJo and it’s nice to see a proper official sendoff for our heroes, especially Stroheim’s sad yet awesome last stand scene.

It ends, appropriately, completely stupidly, with old JoJo beating up random Japanese dudes in an airport, before plugging in to some tunes. The smash to black with the theme is absolutely the best possible way to end and the post credits teasers are delightful appetizers for the next time…

Gee’s Thoughts:
Here we are folks, at the wild and crazy conclusion to Battle Tendency. So it turns out the Red Stone really is a necessary plot device. Joseph, disadvantaged against the stupid powerful Cars, manages to use the Red Stone to amplify the ripple and trigger a volcanic eruption. Or something? Point is, Cars is now in space, the day is won, and we even got treated to the return of the Phantom Blood’s gloriously hammy OP. All in all, a fitting way to end the final clash.

Afterwards, things are wrapped up rather neatly as Joseph gets one last ridiculous antic in the form of crashing his own funeral while we get to see how everybody else’s lives progress. Watching Speedwagon skedaddle cooly for the last time is an emotional moment for Jojo fans, and despite the twisted implications of Stroheim’s character, the extra scene added to the anime makes his epilogue even better than the manga’s. Oh, and Smokey becomes the mayor of some city? That’s cool too I guess.

But I think the final scene is what every fan was hoping to see, which features an old Joseph Joestar, decades after he saved the world, visiting his daughter and grandson in Japan. In addition, a mysterious coffin is fished out of the sea. The tale of the Joestars is far from over…

Iro’s Final Impressions:
Ask most people who are familiar with the manga, and they’ll tell you that the Battle Tendency arc is where JoJo really starts to shine. Phantom Blood was mostly known for being a very simple story, but it did lay the foundation for the utter ridiculousness and flamboyance that Battle Tendency brings to the table. This is what people think of when they think JoJo: ludicrous plot, pointless poses, and amazing battles. And while the production had its fair share of dips, I think overall this adaptation captured the real essence of JoJo’s Bizarre Adventure. 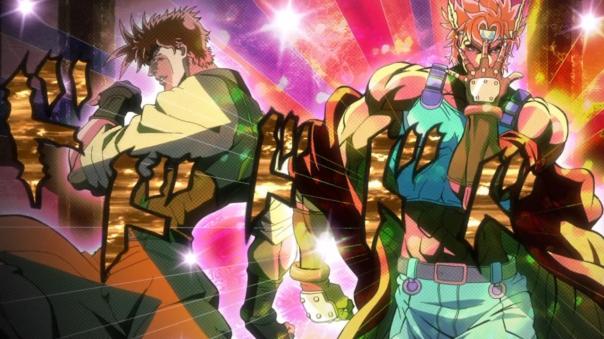 Zigg’s Final Impressions:
I was definitely worried when we kicked off that Battle Tendency would struggle to match the silliness and action I found so endearing in Phantom Blood and to a certain extent this was a weaker arc than the first. The pacing problems so often inherent to shonen manga adaptions reared their head, particularly in the middle segment, and I feel that I noticed the limited animation budget much more here than previously.

But when Battle Tendency was on song, it really outstripped anything we saw in part 1. I think a lot of this is that we’ve got a much more epic feel this time round. While Dio was a dastardly villain, his plot was relatively localised in olde worlde England. Here we’ve got a globe-trotting battle against multiple villains older than humanity itself. It definitely feels the stakes have been kicked up a notch.

We’ve got better characters to root for too. The Part 1 cast were far from unappealing, but Joseph is a much looser cannon than the boy scout Jonathan and that makes him a lot more fun to watch, especially with his crazy improvisational fighting style. His chemistry with Caesar is good too and the two make a decent pair, although I think a little more friendly sparring would have been fun, as they never really get beyond the ‘grudging friends’ phase. And while I don’t think any of the Pillar Men are a match for Dio as individual villains, the baddie ensemble is both scary ad funny and works well.

Ultimately, this was everything we saw in the early stages of JoJo but more so – more characters, more villains, and more importantly, more silliness. Cyborg Nazis! Vampire Horses! Bubbles and bolos and crossdressing and dismemberment and more musical references than you can shake a stick at. Ultimately I think one of the reasons I find JoJo so enjoyable is that it’s truly unique – it doesn’t matter how cheap the animation or improbable the twists, it’s difficult to deny the fun, passion and incredible imagination on show. Battle Tendency did all of that pretty damn well. Your move, Stardust Crusaders… 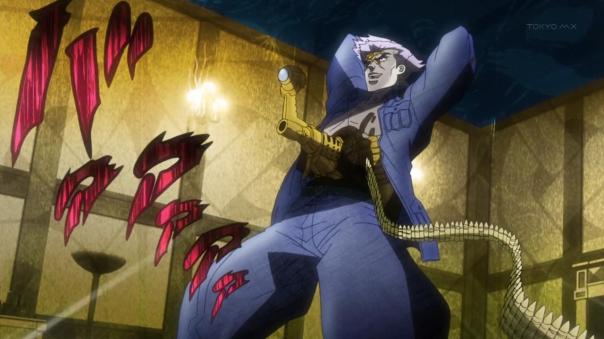 Gee’s Final Impressions:
While Part 3 is the most popular series, there are many people who will gladly argue that Joseph Joestar is the greatest member of the Joestar legacy. These people certainly wouldn’t be wrong in a lot of ways. Battle Tendency marks a turning point in the Jojo canon, as the series switches its focus from the ripple to the eponymous Stands of Part 3. Still, Joseph manages to be an excellent character despite having a generally less exciting power, and his sheer charisma is the reason why Joseph has shown up in more parts than any other Joestar.

Overall, the David has done an excellent job of adapting the first two parts of Jojo to the screen.While Phantom Blood may have been a simpler tale, it still set the tone of Jojo and introduced us to one of anime’s most popular villains; Dio “MUDAMUDAMUDAMUDA” Brando. And Battle Tendency solidified the kind of absurdity that would define the series, from its fabulous poses, over-the-top characters, and unique fights. Sadly, David will be taking a break from Jojo to focus on an animated adaptation of some shitty JRPG, but I eagerly look forward to their glorious return later this year.