Recap: Shima and Kodai are still having trouble seeing eye-to-eye. Meanwhile, Domel is assigned to hunt down the Yamato.

Man, yet another great episode of Yamato 2199, proving once again, that it is the finest anime airing this season. One of the main themes of this episode was a soldier’s loyalty. On one hand, the first half of the episode is a great window into Gamilan society. Domel is a noble man and a loyal soldier, no doubt about that. Even if the task he’s been given directly counters the goals of are heroes, you can’t help but admire a man who clearly isn’t 100% accepting of what’s happening to his society. Here’s a guy who feels conflicted about his orders, especially since he’s abandoning the front lines of another war, which also conveniently shows us that humanity’s struggle for its existence is nothing more than an insignificant rebellion in the eyes of the Gamilans. Overall, I’m already taking a liking to Domel’s nobility and his sheer loyalty puts him in direct contrast with the second half of the episode.

Also totally off topic, but holy crap man, this episode really turned up the fanservice to 11. Not that I totally mind, Yamato 2199 is a very…well animated show. But you can totally tell this was a remake for 21st century audiences. I have a suspicious feeling none of this fanservice was in the original. 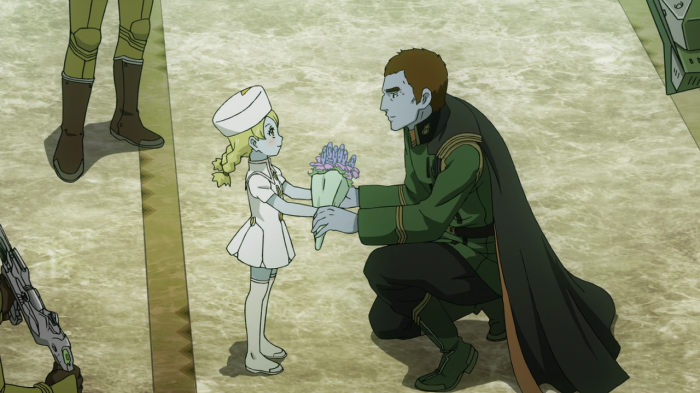 Okita reveals to Kodai that he refused to fire upon the Gamilans during first contact, directly disobeying the orders of his superiors. This leads to the interesting question of what exactly it means to be a soldier. A soldier serves the state and the good of the people, so when the directives no longer benefit them, what exactly is a good soldier? One who will stand for doing the right thing, or one who serves his state, right or wrong? And while it may seem like an easy question, what is even right or wrong when concerning the good of “the state.” It’s a question that helps our two friends Kodai and Shima make up, to my immense relief. As I’ve said before, one of the things I immensely enjoy about Yamato 2199 is that conflicts are often introduced and solved within the span of the same episode, giving it the kind of brisk excellent pacing that few other shows can match. 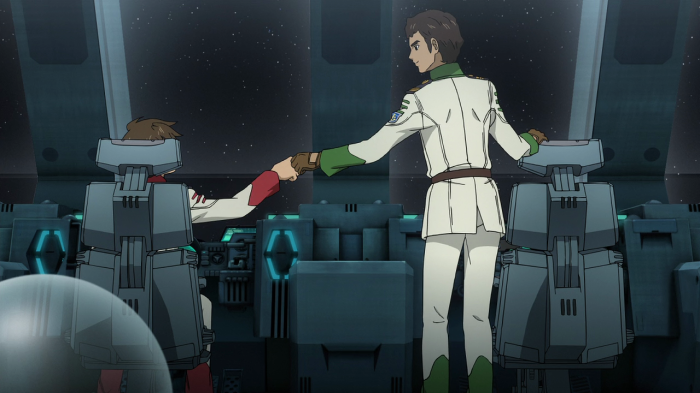 It’s the human moments in the show that really define it from the rest. Shima and the chief engineer laughing over the latter’s granddaughter. Kodai and Yuki discussing the idea of family, both being loners without a choice. Domel and his wife mourning their child. Shima and Akira trying to reconcile their hatred of the Gamilans with their respective revelations. While Yamato is thrilling and a joy to watch when they’re surviving against stacked odds, it’s even better when it’s giving us these little vignettes about the trials and tribulations of its very human characters.