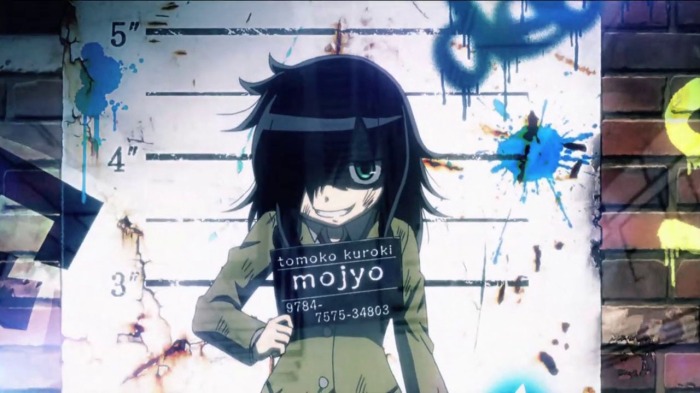 Well, the summer is over, but we have one last memory to share. We all love our endings here if you haven’t noticed, so here’s our thoughts on the best Opening or Ending of the season. Normal OP/Ed Op-Eds will return soon once we iron out the new schedule.

While WataMote ended up ultimately disappointing me there’s no denying the OP, and really all the music in the series, is outstanding. The opening death growl was one of the most hilariously unexpected surprises of the season. Probably the best part of the song is you don’t really quite know how serious to take it. On one hand it’s ironic because the song is so intense and the show is so low stakes, but on the other hand… it’s actually pretty accurate to Tomoko’s inner turmoil. Too bad the rest of the show didn’t quite live up to the opening song’s potential.

While Rozen Maiden was something of a confused mess, one thing they did get right was this gorgeously slow, still ending tune, hanging somewhere between melancholy and mysterious. It had all of the gravitas and atmosphere that the show lacked, and also some beautiful, mysterious visuals to go with it – check out that beautiful reflection shot of Shinku. Probably the best thing that came out of the whole program.

Just slay me where I stand. It’s not like this is the best OP of the season or anything – not by a long shot. It is, however, the one that got seared into my brain. All you have to do is mention Love Lab and I’ll start to hear the OP song playing. This fucking show, seriously.

Attack on Titan’s second season may not have had as much of a punch as the first, but it definitely had its share of great moments. The same can be said of its second opening. While there may not be another iconic opening like Feuerroter Pfeil und Bogen for a long time, it did a lot to keep the energy going into the second half. There’s a bit of ground to cover thematically, and while the style shifts constantly to match it, I don’t think this takes away from the overall song. I’m also a sucker for a good march, so when that beat started showing the Recon Corp’s foray into Titan territory, I got excited. Nothing like a good tuba and choir to get the blood pumping.

Marlin already listed my first choice so I’ll be giving a shout out to my other favorite OP of the season. The Yamato march is basically just a remastered version of the original, with the legendary Isao Sasaki back at the helm. But I’ll be damned if it isn’t as catchy now as it was 20+ years ago. I’m a sucker for these kinds of swelling military-inspired pieces. Unlike a straight march though, there’s a little less pomp and a little more wonder to Yamato 2199’s OP, harkening more to the spirit of exploration that plays such a heavy role in the show.